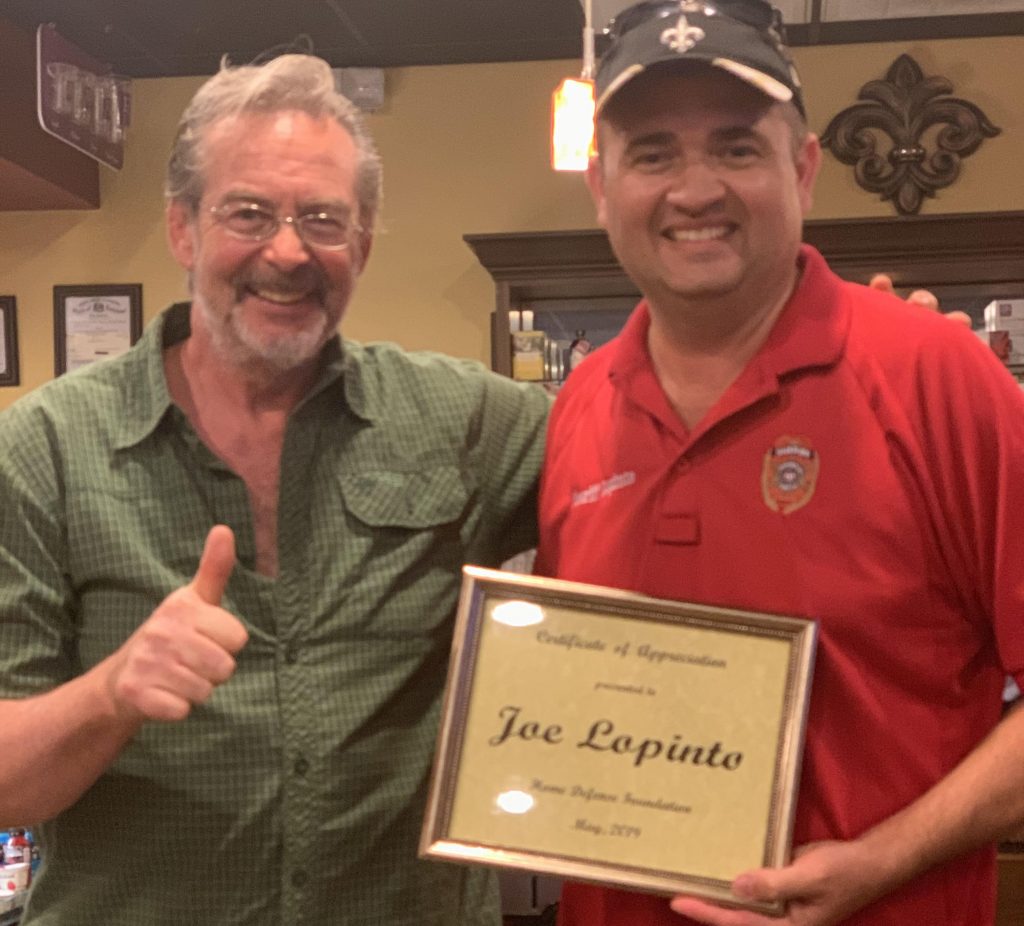 Lopinto’s office serves over 400,000 residents, more than any other parish in Louisiana, and ranks as the 15th largest sheriff’s jurisdiction in the U.S. “We make sure to solve crimes quickly to prevent retaliation,” he said. One tool that helps Lopinto reach that goal is the JPSO’s in-house crime lab, the only facility of its kind in the region. Though the lab is expensive to operate, it provides immediate results. In just minutes, analysts “put the pieces together” that often lead to a prompt arrest.

With one of the fastest response times in the state, JPSO deputies usually reach crime scenes while witnesses are still on hand. “It’s not always about the victims. We have to get to witnesses too,”  he said. Speaking to witnesses immediately often provides a clear road map for investigators to follow.

Lopinto also spoke about jail overcrowding in Jefferson Parish. “We have 1,200 beds but arrest 25,000 people every year. There just aren’t enough beds for everyone we arrest.” Lopinto says each arrestee is evaluated and assigned a rating. Those with the lowest ratings are often released after three days if they have not already made bail. Lopinto said there is up to a 50% recidivism rate for crimes where sentences are short, but a lower recidivism rate for violent offenders who are incarcerated for much longer periods.

Lopinto believes that violent offenders — especially those who have changed their lives — should have the chance for parole. “Give him the opportunity to prove himself. Everybody ages himself out of the game,” the sheriff said. “Sixty-year-olds don’t commit murder. The 60-year-olds still behind bars were the punks of 40 years ago.”

Like Orleans Parish Sheriff Marlin Gusman, Lopinto needs additional deputies. “We are 62 people short and we can’t fill all the jobs.” Louisiana’s prisons house more than 40,000 offenders annually. “We must put more resources behind the criminal justice system.”

The Home Defense Foundation started almost six years ago by concerned citizens who wanted to teach their neighbors about home and self defense. More than 40 HDF supporters came to Baton Rouge last week to speak on legislation including HB 281 that, if approved, would require parishes to follow state law regarding gun possession rather than allowing regulation at the local level. The bill passed out of the Louisiana House Criminal Justice Committee and is currently set to be heard by the full house on May 14.

Lopinto served nine years in the Louisiana Legislature, including a stint as chairman of the same committee. He advised HDF members that they must work hard to educate legislators. “The Legislature includes a lot of good people trying to figure out the best solution for many issues,” he said. “They need a support system around them to make informed decisions.”

Lopinto joined the JPSO as a recruit in 1997 and returned in 2016 as chief counsel to Sheriff Newell Normand. He later rose to chief deputy and became sheriff when Normand resigned in August 2017. Lopinto’s father, Joseph Jr., retired after 36 years as a distinguished member of the New Orleans Police Department. Being a good cop is clearly in Lopinto’s blood.

WHO WILL BUILD MORE AFFORDABLE HOUSING?
Fair housing supporters are beyond disappointed by Mayor LaToya Cantrell’s recent decision to eliminate them from the proposed uses of infrastructure funds that should become available under a new compromise Gov. John Bel Edwards brokered with the tourism industry this week.

Thousands of units are needed to fill the affordable housing gap, especially as more long-term renters are forced out of their homes. With few government incentives available, it’s already hard to convince developers to build apartments and houses that would be leased or sold at “affordable” rates.

Unless the City Council can come up with a new solution, supporters might have to wait in line with the Council on Aging for a future fix by the Cantrell administration. Meanwhile, the need for affordable housing will only increase.

NEW YORK AND HOUSTON IMITATE NEW ORLEANS
As hurricane season gets ready to begin, both New York and Houston are following moves made by New Orleans after Hurricane Katrina. New York’s Office of Emergency Management plans to erect a 4-foot-tall “levee” of soil along the East River esplanade from Wall Street to just north of Brooklyn Bridge. Officials are calling it a “temporary step” until a more permanent solution is chosen.

Six years after Superstorm Sandy, the area below Wall Street will still be unprotected. Similar barriers have already been installed in the Red Hook neighborhood of Brooklyn and the predominately Greek neighborhood of Astoria in Queens.

In Houston, thousands of residents in tony subdivisions whose homes flooded after Hurricane Harvey believe the Army Corps of Engineers knew they were vulnerable and failed to act. A trial began this week that demands the federal government compensate residents and businesses under the eminent domain law. The corps built two dams west of Houston in the 1940s and closed the dam’s gates when Harvey hit. Ten thousand properties were flooded after stormwater flowed back into the surrounding neighborhoods.

GET YOUR MEDICAL MARIJUANA IN HOT SPRINGS, ARKANSAS, STARTING MONDAY
While frustration continues to play out over strained relationships between the key players in Louisiana’s medical marijuana industry, the first medical marijuana dispensaries are set to open next Monday in my former home town of Hot Springs, Arkansas. Voters in that state approved medical marijuana in November 2016. Thirty-two dispensaries were subsequently licensed. More than 10,000 patients have already been approved for prescriptions and 30,000 more will be added to the rolls. Two hundred pounds of product has been grown, dried and cured in the northeast Arkansas town of Cotton Plant, population 649, without a fight over pesticides. Officials expect the initial supply will run out quickly. Lucky for Arkansans, medical marijuana being grown at two other sites will be ready this summer for consumption.

GIARRUSSO PLANS FUNDRAISER FOR MAY 15
Since he took office one year ago, District A Councilman Joe Giarrusso III has been a superior public servant who has made the city’s aging infrastructure and quality of life his top priorities. He follows in the hard-to-fill footsteps of his grandfather, former Councilman Joe Giarrusso Sr.; his great-uncle former Police Chief and Judge Clarence Giarrusso; his father, civic-minded attorney Joe Giarrusso Jr.; and his mother Temple Sinai president and Judge Robin Giarrusso. Giarrusso believes that government must help create both equity and efficiency for its citizens. Like most elected officials, Giarrusso has an ongoing need for fundraising. Join him next Wednesday, May 15, at Ralph’s on the Park to help fill the coffers.