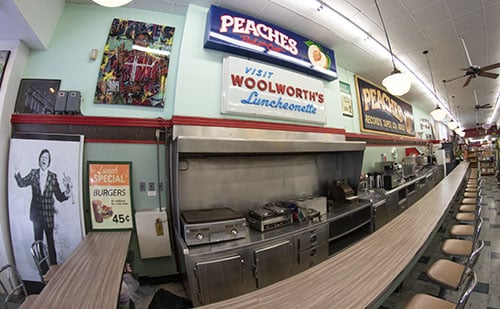 The Peaches Records building on Magazine Street is a former F.W. Woolworth store and still has the original counter. (Zach Brien, Uptown Messenger)

Peaches Records, a long-time stalwart of local music, is looking to try its hand at the culinary scene with the revival of the historic F.W. Woolworth lunch counter in its Magazine Street store.

On Monday, June 3, the record store that helped give Cash Money its start will host a Neighborhood Participation Program meeting at Rosa F. Keller Library in Broadmoor. The meeting is part of a process to gain the city’s approval to serve alcoholic beverages, but Peaches owner Shirani Rea also hopes to use it as an opportunity to introduce the project to the community.

The counter at the Peaches remains in its original location at 4318 Magazine St., a former F.W. Woolworth store. The counter was built in 1940, Rea said, but its historical significance dates to the civil rights movement of the 1960s. 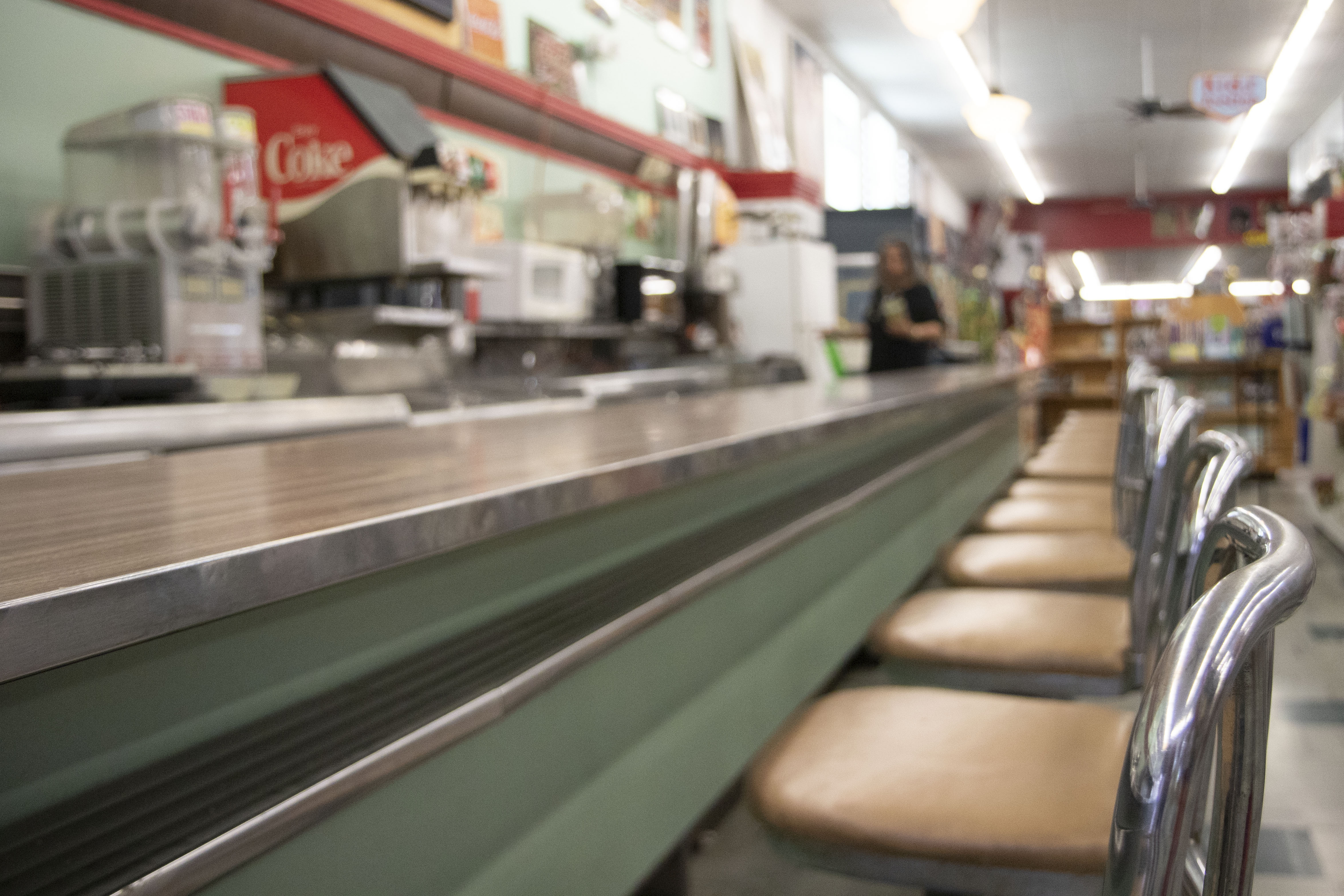 The Woolworth’s counter has become a symbol of the civil rights movement. (Zach Brien, Uptown Messenger)

“The history of this counter may have started back in 1960, but we’re about to take it to a whole other level,” consultant Euricka Alugas said. “Peaches Records is going to show the community how community and neighborhoods should stick together and work together.

Rea is working with Alugas of Safe Kit, a business that assists with licensing, to make sure she receives all appropriate permissions from the city to develop the counter into a restaurant.

While Peaches is seeking a license to serve alcoholic beverages, don’t expect it to become a happy hour hot spot. The store has no intention of competing with local bars and will not serve alcohol daily.

Rather, Rea to wants to honor the history of the counter and create a space to strengthen community bonds.

The F.W. Woolworth chain pioneered the national discount-store business model, and most included a luncheonette. “They carried everything,” Rea said. “It was a five-and-dime where you could get something inexpensive and still get something to eat in the diner. There are people who are still alive, generations who miss that … They’re begging us to resurrect [it].”

There is only one functional Woolworth’s counter left in the country, in Bakersfield, California, according to Eater Los Angeles. A least one other has been repurposed as a restaurant in Tennessee, but, overall, Rea’s counter would be one of only a very few.

The Woolworth’s counters are an icon of the civil rights movement. During the Jim Crow era, Woolworth’s had segregated lunch counters in the Southern states. In 1960, African-American activists in Greensboro, North Carolina, staged a sit-in at a Woolworth’s counter, ordering from the white-only luncheonette and refusing to leave when employees, as required under state law, denied them service.

The Greensboro protest sparked similar sit-ins at Woolworth’s counters around the country, with New Orleans activists quickly picking up the mantle and staging sit-ins at the lunch counter on Magazine Street as well as on Canal Street.

Alugas said the counter at Peaches Records was the site of the first sit-in inspired by the Greensboro events, making it second in a long line of the lunch-counter sit-ins that would grow to include more 70,000 protesters, raise the national profile of the civil rights movement and help topple the Jim Crow laws.

On this history, Peaches wants to create a space for inclusiveness. Peaches Records is already known for bringing people together, hosting concerts and community events throughout the year. The counter, Rea hopes, will create a new avenue for togetherness.

“We also want to keep our neighborhood healthy and crime-free as much as we can bringing it back to the old days when neighbors got together with neighbors,” Rea said. “Getting together over a meal and some music really helps the unification of the neighborhood.”

Architecturally, Rea and her team want to change as little as possible. Alugas said they are balancing preserving the history of the place with meeting current codes and regulations that necessarily require change. This is a challenging task, she said.

Peaches Records has not hired a specialized historic preservation company to oversee the renovation.

The menu at the updated Woolworth’s counter will pay homage to its diner past, but will not be a place where people can grab a hamburger to go. The daily menu will have American cuisine, likely with coffee, shakes and light lunch fare such as sandwiches.

In the same way Peaches Records has acted as a platform for local musicians and artists of all stripes, Rea wants the counter to be a platform for local chefs to experiment. She plans to host weekly pop-ups where chefs of a variety of backgrounds, cuisines and experience levels can showcase their work.

Rea intends for this to be an educational experience, too, allowing New Orleanians to learn about different cultures by sampling food from a variety cultures. Of course, the chefs will be able to pair their meals with music, curating sounds for their pop-up experience.

This is why Rea wants the ability to serve alcohol, so the chefs can incorporate wine, cocktails or other beverages into their menus.

Monday’s NPP meeting will have a presentation of basic information about the planned restaurant and an opportunity to ask questions. Thus far, Rea said she has only received support from the community.

The NPP meeting on the Peaches restaurant will be held Monday, June 3, at 10 a.m. at the Rosa F. Keller Library & Community Center, 4300 S. Broad Ave.