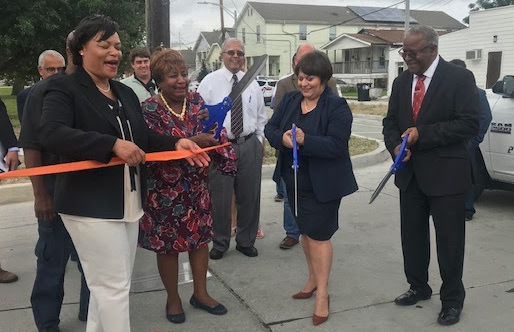 Mayor LaToya Cantrell, left, and other officials celebrate the completion of the streets project. The work included the addition of a bike lane. (courtesy of the City of New Orleans)

The project, which cost $5.4 million to complete, runs from Toledano Street to Martin Luther King, Jr. Boulevard. It was designed in accordance with New Orleans’ Complete Streets policy.

“The residents in this area needed to see that they are valued, they’re respected, and we’re wanting to make the investment in where they live, and that means we are investing in the people in our city,” Mayor LaToya Cantrell stated in a press release.

The project was hailed for its potential to bring improvements to an often-overlooked part of the historic Central City neighborhood.

It’s an area that is primed for development and investment, including the potential for housing opportunities. There are four future projects worth approximately $30 million that are a part of the $2 billion Joint Infrastructure Program in Central City, and which will include full reconstruction work, as well as patch, mill and overlay work.

“You’re going to see a lot less flooding in this area, and that is a really meaningful thing to see in our infrastructure,” said Deputy CAO for Infrastructure Ramsey Green.

Funding was provided by a Community Development Block Grant, FEMA’s Hazard Mitigation Grant Program, and the Sewerage & Water Board. The work was designed by Meyer Engineers, LDT, and built by Command Construction Industries LLC.