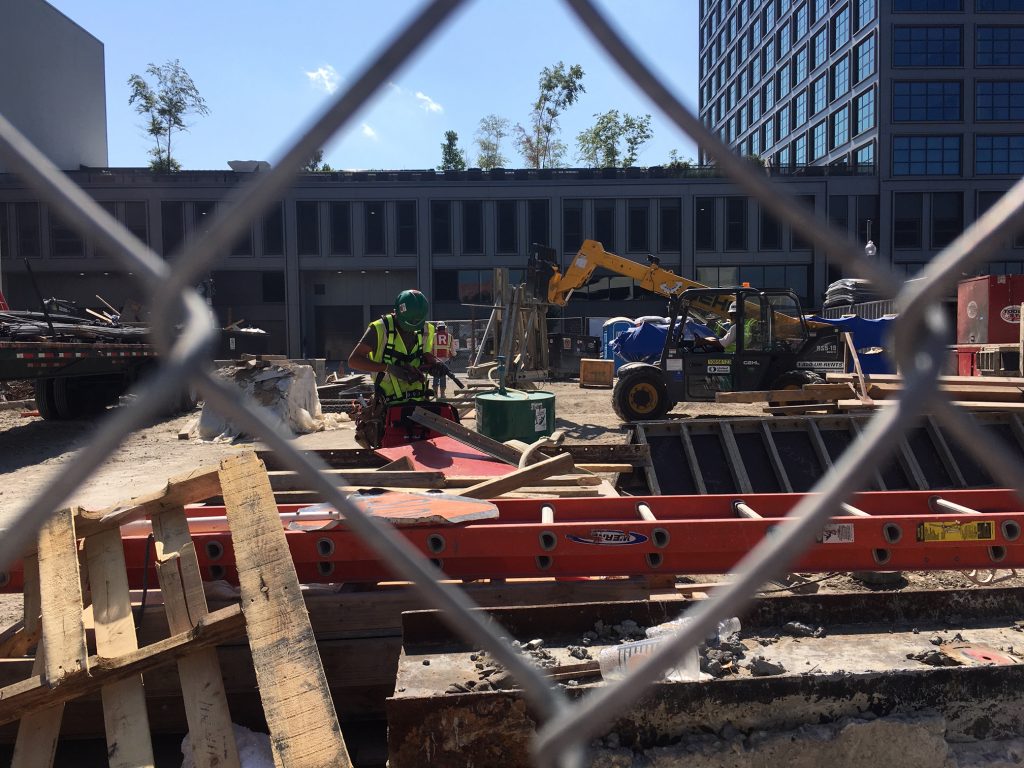 A Domain project is under construction in the South Market district. (Danae Columbus)

Domain Companies officials will meet with neighbors Friday, May 31, to explain a zoning map amendment for their South Market District properties including The Standard, The Beacon, The Paramount, and a 36,000-square-foot surface parking lot. They are asking to change the zoning from CBD -5 to CBD-1, which would allow for increased commercial use, including timeshares.

Domain liaison Christian Brierre says the company is seeking the amendment “solely for the purpose of our retail spaces” and that The Paramount and The Beacon will “continue to be market-leading multifamily apartment products.”

Some neighbors wonder if Domain or a future owner could embrace timeshare as the highest and best use for those properties. Already, The Saratoga, the Maritime and 144 Elks Place are being redeveloped as timeshare or extended-stay properties.

While there is general unevenness in real estate sales citywide, business-friendly zoning downtown — which has encouraged the proliferation of timeshares, hotels and short-term rentals — is keeping overall real estate sales strong. Also Trump-era opportunity zones will provide long-term financial relief to many developers, including those acquiring properties in parts of the CBD.

HREC Senior Vice President Lenny Wormser is bullish on the hospitality sector. “The local real estate market is driven by the CBD, the French Quarter and Uptown, where everyone wants to live. Uptown is still thriving with more residential demand than supply, said Wormser.

“Domain just opened the boutique hotel Maison de la Luz, which will do very well. The Four Seasons is selling their proposed condominium units at $1,200 to $1,500 per square foot. Harrah’s will soon be building a new hotel. Look at the investments along Convention Center Boulevard and the proposed hotel there. Two other hotels in the CBD – the Royal St. Charles and the Troubadour – are about to be sold and upgraded. Everybody sees a bright future in the hospitality sector downtown.”

On the flip side, there has not been a new Class A office building built in downtown New Orleans in 40 years. “You need a Ph.D. in real estate to truly understand the complexities of the New Orleans market,” Wormser concluded.

Long-time Latter & Blum broker Paul Richard feels that the Uptown market is maturing and that we are currently at the long tail of a 10-year cycle that began after the 2008 crash. “There was a peak in prices in the last quarter of 2017. Prices still increased in the first quarter of 2018 but at a declining rate,” Richard said.

Since then prices in some areas are falling and some properties, especially those that list in excess of $500,000, are staying on the market longer. “Finally we are beginning to see a little price compression, but it will be building by building, block by block,” he said. “It’s still a seller’s market with Interest rates stabilizing.”

HRI Properties Chairman Pres Kabacoff attributes unevenness in the market to a slight decline in population and a lack of job growth. “The real estate financing environment has been robust but the condominium and apartment markets have become slightly overbuilt. It will take a little time to absorb all the existing units. Though I am not in the market every day, my gut feeling is that there will be some limitations as to what can be built right now,” Kabacoff said. “This is not a major problem; certainly we are not talking in terms of a recession.”

Kabacoff also believes that neighborhoods including Faubourg Marigny and Bywater, where he resides, are “essentially gold” because they are historic and built on high ground close to the Mississippi River. Real estate sales are still strong in any neighborhood that meets those criteria.

Gentilly-based real estate broker and property manager Eugene Green said many young families who previously would have selected a neighborhood like Pontchartrain Park are now considering “trendy” areas like Mid-City.

“For what a couple might spend to buy and renovate a 1,400 square-foot home in Mid-City, they could get a 2,800 square-foot home in the East. It’s about perception and the desire to live in neighborhoods that are cool and hip,” Green said. There are many houses and lots available for sale in older established neighborhoods like Pontchartrain Park.

Some sections of Gentilly are “very hot,” especially Gentilly Terrace, where houses are now selling for $400,000, as well as Bancroft, Elysian Fields and St. Roch on the lake side of the 1-610, and the area surrounding Holy Cross High School.

The market in New Orleans East is much more complex. In some subdivisions like Spring Lake, McKendall Estates and Lake Willow, almost every home is occupied. The areas around Chef Menteur that were hit by a tornado last year have been rebuilt. But neighborhoods like Little Woods are still not totally recovered from Hurricane Katrina. “

Although there is not enough demand, real estate sales are better in New Orleans East than people think. There are lots of properties on the market for a variety of reasons. But we still have to encourage people to want to live in the East,” Green explained.

With its often-restrictive zoning, some real estate investors consider the French Quarter a tough place to do business. “French Quarter zoning frequently limits what owners can do with their properties,” said tax credit advisor Morris Kahn. Prices are reasonable but buyers sometimes have trouble “making the numbers work.” Zoning regulations are much more flexible in the Treme neighborhood, where Kahn believes some properties are selling at higher per-square-foot prices than those in the Quarter.

Richard, who resides in Algiers, sees an influx of residents into that area because Algiers is “affordable, convenient to downtown, and a good place to live.” Real estate on the always popular Algiers Point continues to be strong, he said.

Given that there are fewer buildings available for re-development, Richard predicts the future of downtown real estate lies in the ability to create contemporary structures that are dense and vertical. “Investing in real estate is generally a path to decent living and a way to build wealth,” Richard concluded.