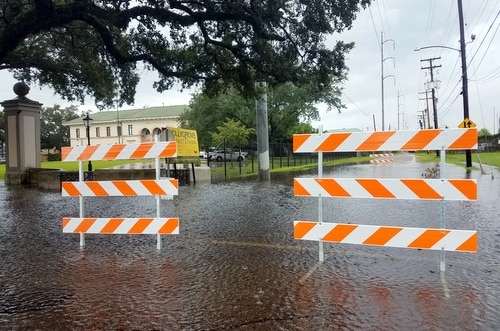 New Orleans officials released the following information following heavy rains and thunderstorms that moved through the metro area Sunday morning. More than five inches of rain fell in parts of the city between 11 p.m. and 6 a.m., with bouts of heavy rain at rates of two inches an hour and higher sparking Flash Flood Warnings.

Widespread street flooding was reported throughout the city. Observed flooding in some areas took notably longer to drain. Those areas include:

“My administration has been laser-focused on infrastructure as a whole and stormwater management in particular,” said Mayor LaToya Cantrell. “As we face our issues head on, we are using data and experience to better live with water.”

NOTE: Special events scheduled this afternoon will proceed as planned, including the Cha Wa Mardi Gras Indian Parade and the Original Big Seven Second Line. The City is working to clear those routes, but participants are encouraged to be careful as some flood-related debris may be present.

Clearing roadways
Department of Sanitation crews are working to clear debris from roadways. Residents are asked to retrieve trash and recycling bins that may have moved due to flood waters. Residents with stranded vehicles in the middle of the roadway or an intersection are expected to move their vehicles to the side of the road, preferably a parking lane, immediately.

The Department of Parks and Parkways is responding to any tree emergencies.

Cleaning up after flooding
Residents are encouraged to clear debris from in front of catch basins and around their property that may have occurred as a result of flooding. Sanitation collection will occur as regularly scheduled.

For properties eligible for collection by the City:

More information about cleaning up safely is available here.