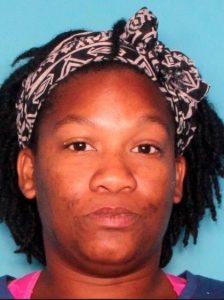 The New Orleans Police Department has obtained an arrest warrant for Raquel Dorsey, 34, in connection with a stabbing that occurred Tuesday, April 9, in the 4500 block of Elba Street.

At 9:09 p.m. on April two neighbors heard an argument outside. When they went to investigate the noise, they heard someone yelling for help and found the victim, a 45-year-old man, lying the porch.

The victim was bleeding profusely from multiple wounds across his body.

When the neighbors attempted to provide aid, he told them he had been stabbed by his ex-girlfriend, later identified as Dorsey. The victim was transported to a local hospital via EMS.

Dorsey had reportedly fled the scene with the victim’s gun, which is of an unknown make and model. When located, Dorsey will be arrested for attempted second-degree murder, police said.

Anyone with additional information on this incident or the whereabouts of Raquel Dorsey is asked to contact NOPD Second District detectives at 504-658-6020, or to call anonymously to Crimestoppers at 504-822-1111.