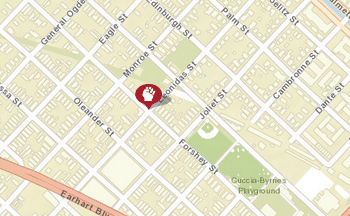 The NOPD’s Violent Offenders Warrant Squad and the U.S. Marshals arrested a 16-year-old male on Thursday in the investigation of a shooting in Hollygrove on April 20.

The victim was riding a bike at Forshey and Leonidas streets at 3:12 p.m. when he was approached by a teen who attempted to pull him of the bike, the police report stated. The assailant then pulled out a firearm and began shooting at the victim, hitting him three times.

The suspect fled on foot toward Earhart Boulevard, then in an unknown direction. The victim was transported to a local hospital via EMS.

NOPD Second District detectives were able to identify the 16-year-old as a suspect in this incident and to obtain a warrant for his arrest.

NOPD VOWS Unit officers and U.S. Marshals found him in the 6000 block of Paris Avenue, where he was arrested and subsequently booked into the Orleans Parish Justice Center for aggravated battery by shooting and illegal use of a firearm while committing a crime of violence.

Anyone with information regarding this incident is asked to contact NOPD Second District detectives at 504-658-6020 or Crimestoppers at 504-822-1111.