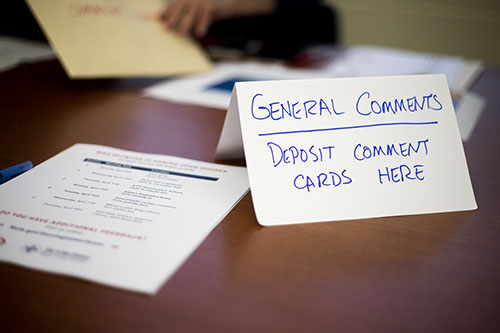 Attendees had the chance to voice concerns to the city at Monday’s event. (Zach Brien, UptownMessenger.com)

On Monday, cyclists, advocacy groups and city government officials gathered at Booker T. Washington in Central City to discuss issues around cycling in New Orleans. The meetings are part of an effort by New Orleans officials to make the city more bike-friendly and a safer place for cyclists.

Bike safety has come more into the spotlight since Frank Fisher, a 34-year-old oil-services worker and lifelong New Orleanian, was killed in February after being struck by a garbage truck while riding on Carrollton Avenue. No citations were written or arrests made in that case.

Then, on March 2, the deaths of Sharree Walls, 27, and David Hynes, 31, and the injuries of other cyclists on Esplanade Avenue galvanized the cycling community. Tashonty Toney, 32, faces two counts of vehicular homicide, seven counts of vehicular negligent injuring, hit-and-run driving and reckless operation of a vehicle in that incident.

Monday’s “Bike Network Open House” for District B was the first of eight such events, one in each City Council district. These open houses promote “Moving New Orleans,” a campaign by the city to bring discussion of cycling and bicycle infrastructure into the open.

The District A meeting will be held Wednesday, April 10, at 6 p.m. in the Stuart Hall cafeteria, 2032  S. Carrollton Ave.

Some things that stress bikers out include car doors, bike lanes on Jefferson and Louisiana and “deciding between high traffic, well-maintained roads versus pothole-filled streets.”

Drivers who responded did not like bikers ignoring bike lanes and riding without lights at night, which is illegal. 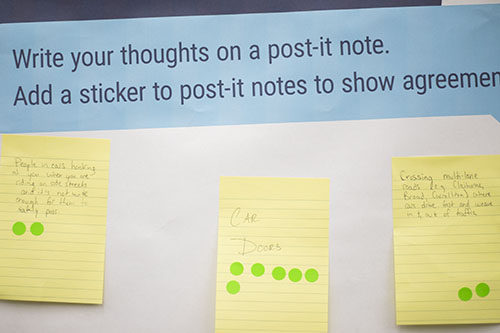 People had the chance to say, specifically, what stresses them out about biking in New Orleans. Several people, as denoted by the green dots, agree that car doors are a big stressor. (Zach Brien, UptownMessenger.com)

April Leigh, New Orleans resident and cyclist, had a different idea about bike safety. Leigh thinks that drivers’ speed is an issue that needs to be addressed.

“A lot of the bike infrastructure wouldn’t be necessary if drivers really slowed down on a regular basis. We have to completely separate two moving vehicles because one is not being operated correctly and is endangering everyone else around them,” Leigh said. “When you have physical obstacles to get around, like a roundabout, you are more likely to slow down, be more cautious or you wreck your car and you don’t go anywhere. It’s kind of a win-win.”

Bike Uneasy, a Facebook bicycle-activist group passed out pamphlets addressing complaints some drivers have about cyclists.

Rob Henig Bell, campaign manager for Bike Easy was on site. He talked about the city’s plans, which include 75 miles of protected bike lanes by 2021, and the need for public awareness about these plans.

“That’s a lot. We’re going from a very little to a lot. We want to make sure that people come out to these meetings to inform that process and not just individuals,” Bell said. “We want to make sure that property owners and business owners understand that this is happening. They should speak up now, voice any concerns now because this is coming. We don’t want people to feel left out.”