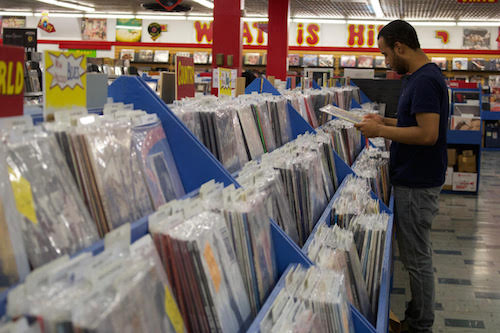 According to record-store owner Lee Rea, “If art imitates life, then the record shop should be an epicenter for local culture.”

Rea is co-owner, along with his mother and sister, of the mom-and-pop record shop Peaches Records on Magazine Street. Peaches, opened in 1975 by Rea’s father, is one of nine independently owned record stores in New Orleans participating in the 12th annual Record Store Day this Saturday.

Record Store Day is an international celebration of independent record stores, according to Rick Johnson, one of three people who work full-time organizing the day’s festivities. 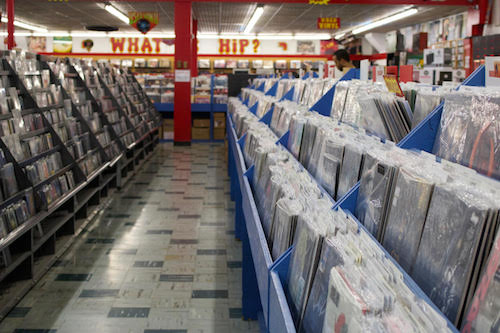 Records sit on display at Peaches Records on Magazine Street. Peaches is one of nine independent record stores in New Orleans participating in Record Store Day 2019.(Photo by India Yarborough)

Record Store Day is held in mid-April each year. It began in 2008, with about 300 participating stores. This year, Johnson said, more than 1,300 stores in the United States and several hundred more across the globe will open their doors Saturday, April 13, for a day filled with music and special promotions.

“In the beginning, we had to go out and ask stores if they wanted to be a part of it,” Johnson said. “We’d go up to a record store and say ‘Hey, do you want to be a part of Record Store Day?’ Most of the time, it doesn’t really cost anything… There are going to be great records that you can’t get if you’re not a part of it. They’re pretty much going to say yes, so every year it’s gotten bigger and bigger.”

Johnson added that Record Store Day is now celebrated by record-loving communities on every continent except Antarctica. “It ends up being the world’s biggest single-day music event,” he said.

And they all have special releases up their sleeves.

“There are so many one-offer leases of awesome, awesome, awesome bands that are only available that day,” Rea said. “The goal for us is to have people engaging with the music.”

Here’s an interactive map of participating store in New Orleans:

Peaches will open an hour early Saturday for Record Store Day. Though Rea said the store is keeping their special sales “close to the vest,” they’ll have hundreds of limited edition, special release LPs.

The store is also partnering with neighboring bar Ms. Mae’s to serve free beer on site and with Hansen’s Sno-Bliz to offer free sweet treats to customers. That’s in addition to Peaches having DJs in store, auction items and more. 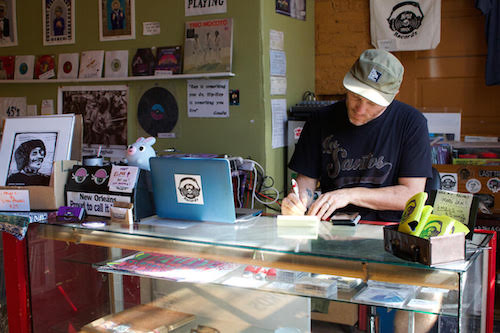 “We also spend the most to get all the records, so it’s our biggest output and biggest input,” Epstein said.

“And of course, the main attraction is all the records,” Epstein added.

According to Johnson, participating stores sold about 750,000 records during Record Store Day 2018.

Some stores, like The Mushroom on Broadway Street, are offering special discounts to encourage sales. Record Store Day will also kick off The Mushroom’s 50th anniversary week.

“We are doing $4.20 off of all new CDs and LPs, and then we’re doing 42 percent off of all our used inventory,” said store owner Christopher Hummel.

Hummel said The Mushroom has participated in Record Store Day every year since it started:

“I do remember being very enthusiastic when it was first proposed as a thing that was going to happen. Ten or eight years ago, there wasn’t as strong of a presence in music buying. It was just kind of in the period of people starting to like records again. There are more independent, small record stores in town now than there have been in the last 20 years.” 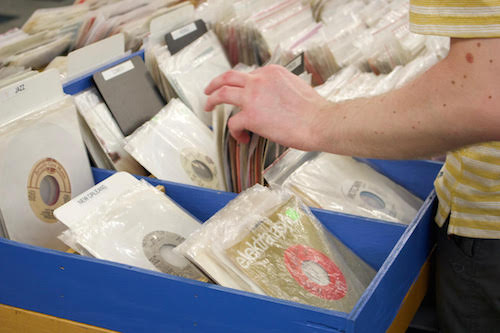 “Record Store Day was kind of this very novel, unique interaction between these majors, these bands that we all idolize and us,” Rea said.

And Johnson said that’s part of the point.

Rea said that in an industry where the only constant is change, Record Store Day was “a breath of fresh air.”

“The days of people waiting overnight for their favorite release … those days aren’t here anymore,” Rea said. “Record Store Day brought that back.”