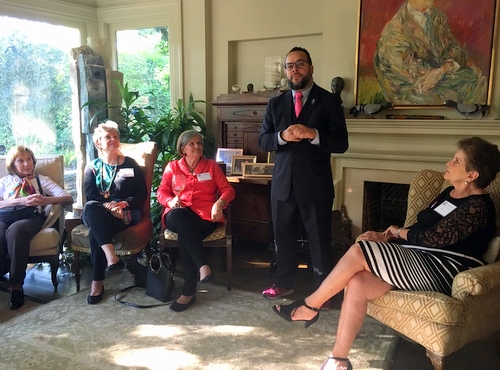 State Sen. J.P. Morrell addresses supporters of his efforts to ratify the ERA in the 2019 legislative session. (photo by Danae Columbus for UptownMessenger.com)

Hundreds of women from across Louisiana are expected to travel to Baton Rouge on Tuesday for an ERA march and lobbying day, an opening salvo in the effort for Louisiana to be the critical 38th state to ratify the Equal Rights Amendment.

Ellie Smeal, staunch ERA supporter and president of the Feminist Majority Foundation, is speaking at a legislative kickoff luncheon Sunday in Baton Rouge sponsored by the American Association of University Women Louisiana, a long-time supporter of the legislation.

“Now is the right time to have the ERA conversation in Louisiana,” said state Sen. J.P. Morrell, D-New Orleans, who is spearheading the state’s ratification process. “Women should be valued the same as men. Let’s move beyond partisan, old-school politics.”

Morrell made a commitment to author the legislation during a heartfelt conversation with the late Felicia Kahn in May 2018. Illinois had just become the 37th state to approve ratification.

“Felicia was such a pillar of feminism and what it means to be an engaged woman,” he said. “After her death supporting the ERA became less of an obligation and more a cause.”

Other states that could ratify the ERA this year include Arizona and Georgia. Legislatures in 38 states must ratify the ERA for it to become an official constitutional amendment. Morrell was attending his first committee meeting as a legislator in 2006 when ERA ratification came up for a vote.

“Legislators have been spoonfed a bad narrative for 30 years,” he said. Armed with new talking points and changing times, more legislators are willing to have the conversation about equal rights this year, Morrell explained.

In addition, Morrell is handling a constitutional amendment to exempt from state taxes diapers and feminine hygiene products. “These items, like prescription drugs, are a necessity and therefore should not be taxed,” he said.

Morrell will also continue to work legislation that provides fair pay for women and well as for a new bill that would prohibit district attorneys from jailing sexual assault victims via “fake” warrants. Besides equal pay and ERA ratification, other legislation progressive women’s groups are supporting include paid family leave and additional funding for early care and education.

Litigator Ravi Sangisetty, who previously ran against incumbent Congressman Jeff Landry in 2014, has joined the growing list of candidates seeking to replace the term-limited legislator Neil Abramson, D-New Orleans. Sangisetty learned a lot in that first race and is ready for this challenge, said wife Dr. Elizabeth Sangisetty, who is expecting their third child in June.  They reside in the Audubon Riverside neighborhood.

Sangisetty graduated from Princeton University and LSU Law School and later clerked for federal Judge Stanwood Duval Jr.  He serves on the Audubon Commission, the Executive Committee of the Louisiana Association for Justice, and on LSU’s committee advising on the redevelopment of Charity Hospital. Gov. John Bel Edwards and Attorney General Landry recently selected Sangisetty as a member of the team representing Louisiana in its lawsuit against opioid manufacturers and distributors.

Ethan Ashley, a first-term Orleans Parish School Board board member, has been talking with key stakeholders about a possible bid to replace Rep. Joe Bouie in House District 97.  National State and Local Advocacy Director for the Anti-Defamation League, Ashley previously worked at the Urban League of Louisiana and for the U.S. Department of Justice Civil Rights Division.

WILL THE HUMAN WITHOUT FLAWS PLEASE STAND UP

I have never been a fan of the “irresponsible” comedian Kevin Hart, but he was right on point in his remarks earlier this week to USA Today: “You should embrace your flaws, because they help make you who you are… and as a human, you’ve got to be OK with being flawed. You’ve got to be OK with knowing that mistakes can be made, and that there’s always opportunity for growth and improvement. The only way to learn is to (mess) up.”

Almost every day someone is “outed” for inappropriate behavior. In response to four women saying his affectionate style made them uncomfortable, Joe Biden released a “seemingly homemade” video in which he vowed to be “more mindful and respectful of people’s personal space.”

In his 50-year career as a public servant, Biden has never been accused of sexual harassment let alone of anything unethical or illegal. Today he must fast-peddle to keep his prospective presidential candidacy alive.

Should Donald Trump face greater scrutiny for his cozy relationship with the Russian government or be forced to release his tax returns which could reveal other conflicts of interest?  A judge recently told me that the appeals court often makes decisions based on intent.

Politics is just different these days. Women can fight just as dirty as men, as evidenced in Tuesday’s historic race for mayor of Chicago, where no holds were barred. Former federal prosecutor and reformer Lori Lightfoot soundly defeated entrenched Cook County Board President Toni Preckwinkle in a knock-down drag-out even more contentious than New Orleans’ Cantrell-Charbonnet contest.

Campaigns that feature two strong African-Americans females are probably the wave of the future in cities with a Democratic voter majority. On the national front, President Trump’s support in the polls remains unusually steady regardless of good or bad news. Only 579 days remain until the 2020 presidential election.

April 15, 2019, is more than just the day federal incomes taxes are due. It’s also a critical first-quarter campaign reporting deadline for presidential candidates. Democratic candidates who want to participate in the summer presidential debates must show they have amassed donations from 65,000 people by that date.

Other candidates are developing innovative approaches to get more people to give. Donating even $1 to several of your favorite Democratic candidates will help build debate participation which will in turn lead to a more robust dialogue on the issues.