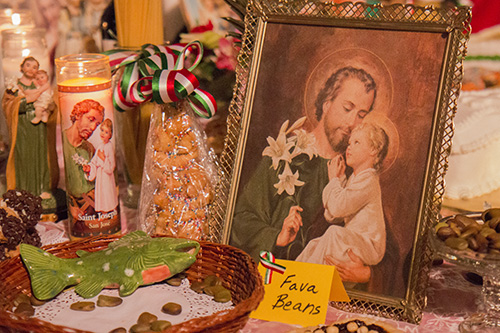 An offering of fava beans in front of an image of St. Joseph at the altar in St. Stephen’s Church on Napoleon Avenue in 2015. Behind the beans is a pignolatti, pastry molded into the shape of a pine cone, representing the pine cones Jesus played with as a child. (Zach Brien, UptownMessenger.com)

The St. Joseph’s altar is one of those Catholic traditions, in this case a Sicilian Catholic tradition, that, through some very creative adaption, south Louisiana has made its own. Among all the breads and cakes shaped into religious symbols — a monstrance, chalice, cross, heart, dove, Bible — it’s not unusual to find an alligator. A Lenten symbol, perhaps.

The fava bean is also ubiquitous at New Orleans altars. Blessed dried beans are given out to worshipers as they leave the altar (carry it with you, legend has it, and you’ll never run out of money). Baskets of colorful gilded beans are placed on the altars. Green fava beans are sometimes served in frittata or with garlic sauce at the St. Joseph’s Day meal.

The altars originated as an offering to St. Joseph, thanking him for that intervention. Yet in a 2010 master’s thesis for Louisiana State University titled “The Expansion of St. Joseph’s Altars in South Louisiana,” Nara Maria Ersilia Crowley writes: “Of the approximately thirty published celebrations of the St. Joseph Altars in Sicily, none mentioned the ritual of the fava bean.” In the imaginative and enthusiastic hands of Sicilian immigrants in Louisiana, new rituals developed for the traditional symbol.

Tuesday, March 19, is St. Joseph’s Day, when altars are open to the public; some are also open for viewing on Monday. Below find some altars in the Uptown area, from a list compiled by the Archdiocese of New Orleans. Altars can also be found in private homes (often indicated by a sago palm leaf above the door) as well as businesses such as some Rouses Supermarkets and Avo Restaurant on Magazine Street. If you know of an altar not on this list, please leave the information in a comment to this story.

Altars are constructed to feed the hungry as well as give thanks. Once they are broken down, the food is delivered to needy families in the parish. And the donations received go to charity, so bring cash when you visit an altar.

Visitors traditionally receive a swag bag with a prayer card, a lucky fava bean, some cookies and dried bread. Eat the cookies, but save the dried bread to toss into your yard when a storm is approaching, calling on St. Joseph to protect your home (board up your windows, too). Another very south Louisiana tradition.