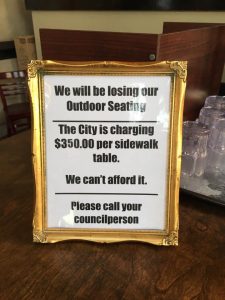 Uptown restaurants and coffee houses are about to remove outdoor sidewalk seating due to what some local business owners see as cost prohibitive fees being levied by the city.

Many residents are expressing their unhappiness on social media. “You are killing small businesses that are the lifeblood of this city,” said New Orleans’ Katie Winters on Facebook.

The city is letting businesses know it will enforce an ordinance that requires restaurants, cafés and coffeehouses to obtain a permit for sidewalk seating. Businesses in the high-traffic neighborhoods along the river will pay at least $350 annually for each of their sidewalk tables.

Rue de la Course owner Debra Dunn says she cannot afford it and will have to pull her tables inside. Dunn’s coffee house, on the corner of Carrollton and Oak streets, currently has nine tables lining the sidewalk next to her café. She states that she cannot afford the yearly fee of approximately $3,100.

“There won’t be any tables and chairs anymore; I can’t do it. I sell coffee. My checks are less than 5 bucks per check,” Dunn said. “I’d have to go up on my prices, which I will not do to my customers.”

Several of Uptown’s storied restaurant corridors — including Magazine, Oak, Maple, Freret and Carrollton — will be affected by the regulations, a 2017 update of a 1956 ordinance governing the commercial use of public sidewalks.

“The rules are the same. The issue is that people are not used to enforcement,” said Juan’s Flying Burrito Restaurant Group co-owner, David Greengold.

Greengold says that his Juan’s Flying Burrito location at Magazine and Joseph streets would be expected to pay $1,800 per year with its current outdoor table configuration. However, he also says that, because of the regulations, some seating will have to be removed and downsized to smaller tables. The $35o is for tables that seat up to four people. It will cost another $100 per seat for larger tables.

“I have to get out there with a tape a measure, a piece of chalk and a calculator,” Greengold said.

The ordinance also requires detailed drawings of the business’s sidewalk configuration showing at least 4 feet of clearance for pedestrian traffic.

“It is incredibly important that the city maintains sidewalk mobility regulations for those pushing strollers and impaired mobility egress to ensure we are ADA compliance. If they use the money for that, I’m fine with it,” Greengold said. “I don’t want to pay it, but I understand why it exists. However, the fee should be based on gross revenue. It’s not fair for a small café.”

The Juan’s restaurant group employs over 200 people and has the coffers to pay fees that a sole proprietor may not be able to afford, he said.

The fees collected will go into the general fund, a City Hall spokesman said. The ordinance is citywide, but the fees are higher in specified areas, generally neighborhoods with denser concentrations of restaurants and cafes. Any variations in fees are based on the location of the business, the size of the tables and other factors.

Other city fees levied include $200 per year plus a $50 application fee for sidewalk sandwich chalkboards and additional amounts for balcony tables.

Whether individual local restaurant owners can afford to pay for sidewalk use is up for debate. “Restaurants don’t make a lot of money in this impossible city; we make about 6 cents on a dollar. It’s a love of the restaurant business, rather than the love of making money,” Greengold said.

The city has been educating businesses about the need for sidewalk permits for the past year, the City Hall spokesman said. The Safety and Permits Department has not yet started to enforce the ordinance.

Enforcement could occur as spring weather lures more people outside. “That’s one of the enjoyments in NOLA, to sit outside in nice weather. There’s a comfort level to it. You want people sitting outside,” said Dunn of Rue de la Course. “For now, the tables will stay until I have to move them.”