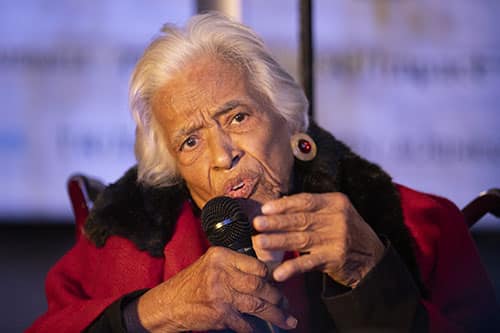 Leah Chase, long-time chef at Dooky Chase’s restaurant in the 6th Ward, gives a speech before accepting the 2019 InnovatHER award during an event at NOLA Brewing on March 26. (Zach Brien, UptownMessenger.com)

Leah Chase has been working in what is now Dooky Chase’s restaurant since the 1950s. She still works in the kitchen today, at 96. On Tuesday, she accepted the first 2019 InnovatHER award, presented by TruFund Financial services, honoring her legacy as a female entrepreneur and business owner.

The award was presented at a press conference by TruFund Financial Services where they announced their participation in the Wisdom Fund, a national loan fund targeted to women entrepreneurs. The event was held at NOLA Brewery.

“The United States is home to over 12 million female-owned businesses, which employ around 9 million people and generate over $1.9 trillion annually,” said Kim Carter Evans, vice president of corporate communications at TruFund Financial Services. “The fastest-growing group of entrepreneurs has been female entrepreneurs. So we’re killing it, right?” 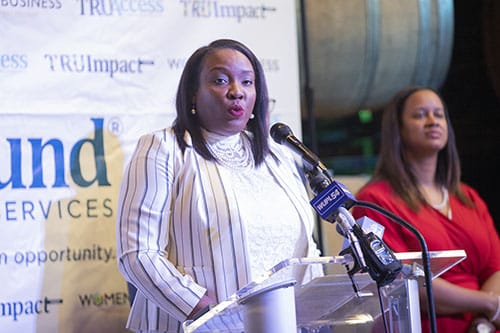 “TruFund understands that a more productive economy, is a more inclusive economy. TruFund is no stranger to investing in women,” said Evans. “The TruFund senior management, three out of seven are female, so we’re making the investment.”

Just as TruFund invest in women in management positions, Leah Chase, in her acceptance speech, called on young women to believe in their power and know their worth.

“Young women today don’t really know their power. They don’t know how to use their power. You can get anything you want,” Chase said in her acceptance speech. “Those men have to come to you. Remember that you can uplift your man, but still have your power. I’m proud of all these young women I see out here today.”

Keeping in line with Leah Chase’s point about women recognizing and using their power, the panelists discussed negotiating, something women have historically struggled with. There are various schools of thought as to why. Some researchers found that women receive push-back when negotiating, others found some women see fewer situations as negotiable.

Araujo, who deals a lot with terms and conditions in her legal practice, expressed some of women’s issues in this arena.

“In terms of private negotiations, women, they don’t put themselves out there enough. They don’t ask enough,” said Araujo. “Women, themselves, have this gender bias. We just think, ‘Well, I can’t compete enough, so I’m not going to ask for what I think I deserve.’ We need to change that, through events like this.” 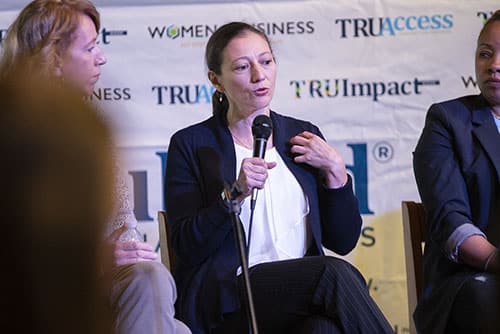 “In terms of private negotiations, women don’t put themselves out there enough,” Jule Araujo, a contract attorney. (Zach Brien, UptownMessenger.com)

The panelists discussed the importance collaboration and empowerment, another point Chase touched on. Teresa Lawrence, CEO at Delta Personnel, highlighted the point that women are not competing with each other. They can, and should, help each other.

“Women have to help each other,” Lawrence said. “Wisdom is something you don’t run out of.” 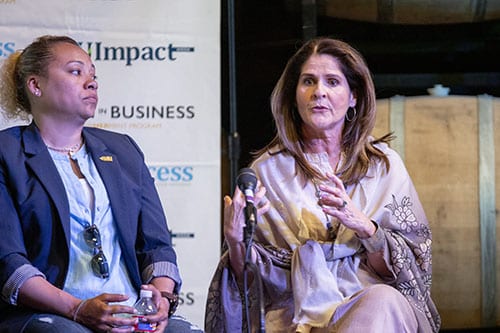