The up-and-coming Faubourg Lafayette is the location of Café Porche & Snowbar which opened last year on Baronne Street. You may have to look twice for the red umbrellas, as the little southern Café is tucked behind a whimsical two-story Lilliputian white and blue Wendy house that operates as the café’s Snowbar (snoball stand). 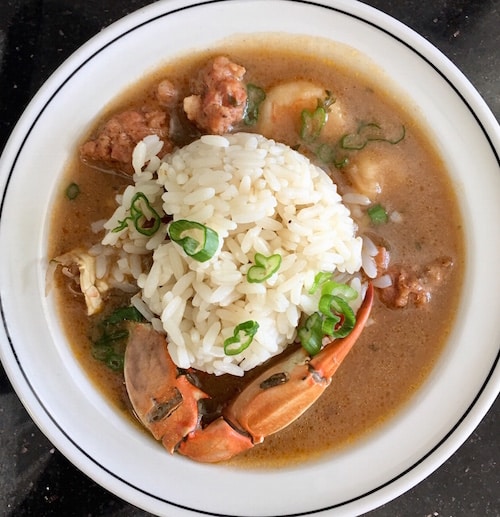 The modern Café has proven popular with locals and tourists and is finding its footing in the new Central City restaurant scene. It is noteworthy that the kitchen and restaurant is owned and run by a Black woman, which is still too rare in our local food scene.

Coronella Porche-Jenneford opened Café Porche last year. The menu is comprised of recipes inspired by the cooking of her mother, Esther Porche, and grandmother, Esther Taylor. Her sister Constanza also helped shape the menu and is the creator of the café’s Creole Bread Pudding and Sweet Potato deserts. Coronella’s brother Mark Porche cooks the Red Beans & Rice nicknamed “Porche Cayenne,” but it’s not too spicy, so order away.

The restaurant follows in the upswing of the post-Katrina redevelopment of the Oretha Castle Haley and Dryades area. “We wanted a location that was central to the New Orleans Metropolitan area. Our goal is to create cuisine that embodies the diversity of Louisiana cooking and culture as well as providing jobs for the community,” said Coronella.

An item favored by locals is The Flying Dutchman, which is a tasty poboy loaf laden with old school New Orleans-style seasoned shrimp dressing and topped with fried shrimp. Other offerings your grandmother might have served are the Oyster Dressing appetizer with Fried Oysters, Smothered Liver and Onions, and Creole Gumbo. Poboys includes the hearty Lil’ Dizzy’s Hot Sausage, Fried Oyster, Fried Catfish, Grilled or Fried Shrimp, and the Portobello Mushroom. Vegan menu items and salads are also available.

Café’ Porche is open for Breakfast and Lunch. The snowball stand is open and offering a signature snowball named for the family’s matriarchs. The Queen Esther is a lavender-colored Orchid Vanilla Magic snoball topped with condensed milk and freshly chopped strawberries.