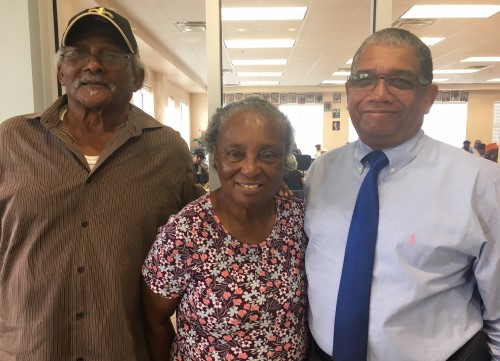 On Saturday, March 30, New Orleanians will vote on a 2-mill property tax that would fund services for seniors. If approved, the new millage is expected to generate $6.6 million annually. The “average” New Orleans homeowner would pay less than $100 per year.

I am one of almost 80,000 people aged 55 and over who live in Orleans Parish. Together we represent almost 25 percent of the city’s population. Experts agree that older adults are the most under-served population in our community. Though I have never participated in any of the programs offered seniors by the New Orleans Council on Aging or even through my church, I know how vital they are to the health and welfare of those served.

Seniors – like young children – frequently require extra assistance with daily living. Unlike children they often lack a family member who can help. Many homebound citizens are dependent on Meals on Wheels for basic nutrition. An older adult might require an in-house personal care assistant to bathe, dress or help with housekeeping. Seniors need companionship, which increases overall mental health and instills a stronger will to live. Senior Centers provide a lifeline for those who yearn for socialization and meaningful daytime activities.

Despite successfully serving many thousands of New Orleanians for more than 30 years, the New Orleans Council on Aging must beg the mayor and City Council for funding annually. Council on Aging leader Howard Rogers was smart to approach council members for a long-term funding solution. So far, supporters have failed to build the strategic constituency – starting with Mayor LaToya Cantrell – that would ensure easy passage. According to the Bureau of Governmental Research, the amendment is too broad. That was the City Council’s intent. The Council on Aging has developed a solid plan on how to spend the millage which includes increased transportation and other support services. Yet, they are not the only eligible recipient. The City Council intended that churches and nonprofits in their districts might also apply, a la the Harrah’s Casino grants.

But that’s no reason to vote against the proposition. Dedicated federal funding for senior services has been decreasing every year. The City Council will be in total control of this new revenue stream. There will be public hearings. The Council could take the time study best practices in other cities. They could instill strong eligibility criteria for the groups seeking funding. They could require strict operating procedures and adequate monitoring to ensure the funds are spent appropriately. The City Council could even seek input from the BGR, the various chambers of commerce, the Urban League, the faith based community, and the Business Council to create a model program that other cities might emulate. Mayor Cantrell must play a leadership role as well.

“The Council on Aging is excited about this tremendous opportunity to work with the entire community to develop a city-wide holistic approach for senior services,” said Eugene Green, Council on Aging board chair. “We also appreciate the unanimous support of the City Council. The passage of the 2 mills will be the catalyst for a brighter future for New Orleans seniors.”

Agencies including the Council on Aging are proven leaders in serving older adults. Let’s use this millage election as a chance to forge new partnerships to help those who need more support in the twilight of their years. Early voting begins Saturday March 16 and continues through March 23 at City Hall, the Algiers Courthouse, the Voting Machine Warehouse and the Lake Vista Community Center. Voting is available Monday through Saturday from 8:30 a.m. until 6 p.m. Election day is Saturday, March 30.

Two new faces have popped up in the race for the seat currently occupied by the term-limited Walt Leger III – attorney Mandie Landry and economist Ali Bustamante. An active member of the Climana Neighborhood Association, Landry is expected to make her formal announcement before the end of March, according to a campaign spokeswoman. She has already filed the necessary paperwork with the state ethics board and has completed a successful online fundraising appeal to her nearest friends.

A member of the current class of Emerge Louisiana, Landry is headed to Washington, D.C., for their legislative candidate training. She is expected to “bolt out the gate” upon her return. A graduate of the University of Notre Dame and Georgetown University Law Center, Landry worked on Capitol Hill for Congressman David Obey and Sen. Debbie Stabenow while at Georgetown. She currently practices defense law with Schonekas, Evans, McGoey & McEachin.

Dr. Bustamante is chief economist for the Louisiana Workforce Commission (Department of Labor) and previously served as an economic policy specialist for Loyola University’s Jesuit Social Research Institute. He has been telling friends of his interest in the District 91 contest and intends to “make it official” in the coming weeks. Named in honor of the athlete Muhammed Ali, Dr. Bustamante studied at the University of Miami where he received a Ph.D. in political economy. He is an expert in labor policy, economic justice and economic impact analyses. A husband and father of two small children, Dr. Bustamante resides in the Touro Bouligny neighborhood.

Lawyer and civic activist Kea Sherman has thrown her hat into what is already becoming a crowded uptown race to replace the term-limited Neil Abramson. A co-founder of Emerge Louisiana, along with Kate Magasamin and Jennifer Greene, and of Les Femmes PAC, along with LaTanja Silvester, Sherman is a well-respected leader who is ready to tackle the district’s tough issues including expanding early childhood education, diversifying the economy and closing the equal pay gap. Sherman was appointed by Gov. John Bel Edwards to the state’s Environmental Education Commission and also sits on the boards of Dress for Success, Kingsley House and the Louisiana Association for Justice.

Women interested in participating in a program to help them achieve their greatest potential are invited to apply to Loyola University’s new Women’s Leadership Academy. The academy will operate from April 16, 2019 to January 21, 2020 and feature classroom sessions, guest speakers, mentorship meetings and networking opportunities. Apply online at http://bit.ly/2SY63Vt.

This column was corrected to reflect that Kea Sherman was co-founder, not founder, of Emerge Louisiana and Les Femmes PAC.