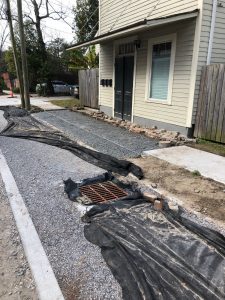 The Department of Public Works, in conjunction with the Sewerage & Water Board of New Orleans, is now more than 80 percent complete constructing a road and infrastructure improvement project on Cherokee Street between Benjamin and Pearl streets.

The project in the Black Pearl neighborhood was designed by Professional Engineering Consultants Corp. and is being built by Fleming Construction Co.

Crews are also rehabilitating damaged sidewalks in poor condition on both sides of the project limits. An additional layer of asphalt will be placed later this month.

The landscaping is being completed now, the city reported in early March.