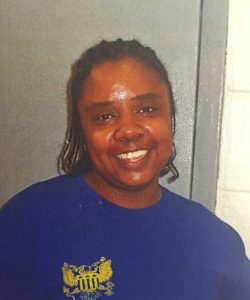 After spending her entire adult life behind bars, Michele Benjamin learned Monday that she will be able to go free, the Loyola University Law Clinic has announced.

Benjamin, 41, was a teenager when she was sentenced to life without parole in 1996 for the murder of a German tourist in New Orleans.

The Loyola law clinic began filing appeals in her case not long after life sentences for juveniles were ruled unconstitutional by the U.S. Supreme Court in 2012. That ruling, in Miller v. Alabama, was made retroactive by the Louisiana Supreme Court in 2016, paving the way for Benjamin’s release on parole.

The circumstances of Benjamin’s case have inspired support in the local social justice community. The parole hearing at Jetson Correctional Center in Baker, LA attracted about 15 people, according to advocates working with Benjamin, more than any other prisoner at the hearing. The parole board received about 50 letters urging her release.

This is support Benjamin never received as a teenager living on the streets or as a young defendant in the Louisiana criminal justice system, said Christine Breland Lobre, program director for the local nonprofit Women With A Vision, who has been working with Benjamin.

A letter to community organizers from a Loyola student practitioner builds a sympathetic case. It describes how, while at the women’s prison in St. Gabriel, Benjamin not only obtained her GED, fighting for training that is generally denied to lifers, but worked tirelessly through the legal system so that other lifers can get theirs.

That letter also describes the circumstances of Benjamin’s crime, stating that she got into an altercation with the tourist after he tried to solicit her for prostitution.

That account, however, differs sharply from newspaper reports at the time. “Two teens lured tourist to his death, N.O. police say,” read the Times-Picayune headline on May 3, 1994.

Police and prosecutors maintained that Martin Hecker, 25, was shot to death during an armed robbery.

An Armstrong Park security guard found Hecker lying face down in the Marais and St. Philip intersection in the Treme neighborhood sometime after 4 a.m. on May 1, 1994. A gun was under his leg near his left hand, court records state. Standing near him was Chanda Desilva, 18. Benjamin, then 16, had fled toward Rampart Street.

He was on his own and it was well past midnight by the time he met Desilva and Benjamin in the Quarter, where the teens had been hanging out with some other friends. Court records state his blood alcohol level was .11 percent, legally classified as drunk.

Hecker offered to walk them home, Benjamin told police after turning herself in later that day, giving a statement that was read during trial. On their way to Treme, he “told them his wife was in Germany, that he had no companion in New Orleans, and that he was looking for a ‘date,'” a proposal she refused, court documents say. Hecker got angry and brandished the gun, she said, and she grabbed it in self-defense before accidentally shooting the 25-year-old.

Desilva was first questioned by police as a witness, but she was taken in as a suspect after repeatedly changing her story. While in the squad car, she handed over Hecker’s wallet to police officers, saying she took for safekeeping. She told police that Benjamin had pulled the gun on Hecker in a robbery attempt while he was walking them home.

No records were found on the gun past September 1973, when it arrived in a store on Howard Avenue.

‘She is worthy of second chances’

Whatever happened on that Sunday in 1994, Michele Benjamin’s life should never have reached that point, said Lobre of Women With A Vision, which has been working with Loyola and other groups on the case.

“She was a 16-year-old who had survived physical and sexual assault,” she said. “There were numerous traumas in her life that called for intervention. She was failed many times leading up to this event.”

Benjamin was raped at 11 and molested as a child, Lobre said, noting that the majority of incarcerated women have a history of sexual abuse. A U.S. Department of Justice study, cited in a Vera Institute report, found that 86 percent of female prisoners in 2012 had been a victim of sexual violence.

A product of generational poverty, Benjamin was chronically homeless and went to school inconsistently but had no prior criminal history, Lobre said. She became pregnant at 15 and had a toddler with cognitive delays when she began serving a life sentence in 1996.

While incarcerated, she worked on her appeals, earned her GED and cared for dying prisoners in the hospice ward of the Louisiana Correctional Institute for Women. “She is worthy of second chances,” Lobre said. “She is worthy of intervention. That’s why we stood with her.”

Life on the outside

On May 1, exactly 25 years from the day Martin Hecker was killed and she was taken into police custody, Benjamin will be released on parole.

Her immediate plans are to live at Sister Hearts — a transitional facility in Arabi — and work in the Sister Hearts thrift store, using sewing skills she picked up in prison to mend donated clothes.

She also wants to take college courses in culinary arts, and her advocates are looking for a restaurant willing to offer her an apprenticeship.