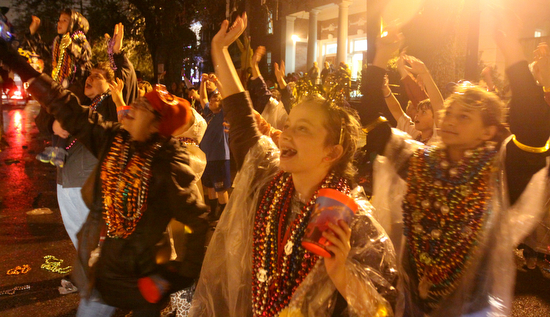 Well before the first marching band strikes up in the Oshun parade on Friday evening, city officials have been working to make this year’s Uptown parade season safe and enjoyable.

Trees have been trimmed, response plans tested, first-aid and lost-child stations have been set up, porta-potties are in place and information lines and apps established. The city is also asking parade-goers and neighborhood residents to do their part by showing consideration for all.

First-aid stations are staffed by the New Orleans Health Department and the Medical Reserve Corps. Paradegoers are encouraged to go to a first aid station if in need of medical assistance. However, always call 911 during a medical emergency.

On parade days, stations are open one hour before the first float of the first parade and until crowds disperse. The are three Uptown along St. Charles Avenue, at Napoleon Avenue, Washington Avenue and Felicity Street. There are two downtown, also on St. Charles, in the circle and at Canal Street.

Lost-children stations are staffed by the New Orleans Police Department. Because most families are quickly reunited near the area they were separated, residents are encouraged to tell the nearest public safety official if a child is lost.

On parade days, stations are open one hour before the first float of the first parade and until crowds disperse.

There are two lost-children stations Uptown on St. Charles Avenue, one at Napoleon Avenue and another at Jackson Avenue. There’s also a lost-child station downtown at Canal and Carondelet streets.

The Department of Property Management provides nearly 650 portable restrooms for public use along the parade route. View a map of restroom locations at routewise.nola.gov. They can be found Uptown at St. Charles Avenue and Louisiana and along Napoleon Avenue.

Residents are reminded that if they plan to charge a use fee for use of a toilet on their property, they need a permit. Portable restrooms on flat beds in parking spots are considered abandoned property that can pose a security risk and will be towed at the owners’ expense. 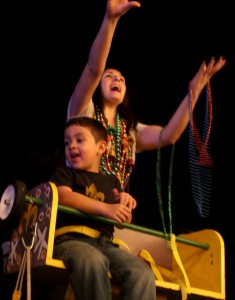 All ladders must be at least 6 feet from the curb, the city warns. (Sabree Hill, UptownMessenger.com file)

The Department of Parks and Parkways has trimmed more than 600 trees along parade routes and will keep the neutral grounds clear throughout the season.

Recent construction on St. Charles Avenue has been completed. Residents are encouraged to careful, because curbs are slightly taller than they used to be.

Residents are reminded not to rope off areas of the neutral ground, public sidewalks or other public property, which is prohibited by law. Additionally, residents should not to leave ladders, tents, grills or any other item on the neutral ground or along curbs and sidewalks overnight.

All ladders and grills must be at least 6 feet back from the street curb. Parents are also warned not to fasten ladders together.

Anything left behind will be disposed of. For more information on what to bring and what not to bring to parades, visit ready.nola.gov/mardi-gras/what-to-bring/.

In 2018, 46 tons of Mardi Gras beads were cleaned out of the city’s storm drains. This year, the Department of Public Works will install “gutter buddies” — barriers that block solid objects from entering drains — along the Uptown and Endymion parade routes.

Residents and visitors are also encouraged to do their part to keep trash off of the streets and out of the drainage system. Tips include cleaning up your area before you leave, depositing trash in public receptacles, or carrying your trash with you to dispose of later.

Additionally, the Young Leadership Council will again host its recycling initiative during tge Krewe of Freret parade on Feb. 23 and Krewe of Tucks on March 2. For more information, visit ready.nola.gov/.

Grounds Krewe will also conduct a recycling initiative in partnership with Entergy, Urban Conservancy, Arc of Greater New Orleans, Republic Services during the Muses parade on Feb. 28 and the Thoth parade on March 3. Look for volunteers with collection bags for unwanted throws, cans and plastic bottles following the last float between the parade start and Jackson Avenue.

Department of Sanitation crews will follow parades each day to clean routes. Parade-goers are urged to stay clear of sanitation crews and their heavy equipment.

The New Orleans Office of Homeland Security and Emergency Preparedness will provide public information leading up to and during Mardi Gras events.

Tips and resources about transportation, safety, what to bring and permitting are outlined online at ready.nola.gov/mardi-gras. Real-time updates related to weather, safety, traffic and parade delays will be provided on Twitter @nolaready and via text message.

Residents and visitors are encouraged to text MARDIGRAS to 888777 to subscribe to text updates. This year, the city is also launching routewise.nola.gov, which displays parade routes and tracks the beginning and end of each parade in real time.