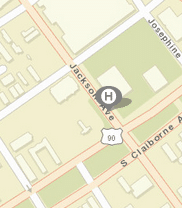 Responding to a medical call on Feb. 27 at around 8:20 a.m., officers went to the St. Thomas Baptist Missionary Church at 2926 Jackson Ave.

Upon arrival, they found an unresponsive unidentified adult male down on the ground, outside the front entrance of the church, the NOPD said in news release.

The victim was suffering from apparent head trauma and was later pronounced dead on the scene by emergency medical personnel. Police are investigating the death as a homicide.

The Orleans Parish Coroner’s Office will release the victim’s name and the official cause of death.

If you have any information regarding this incident, please contact Homicide Detective Maggi McCourt at 504-658-5300. Citizens with information that can help solve crimes are asked to call Crimestoppers at 504-822-1111 or toll-free 877-903-STOP.