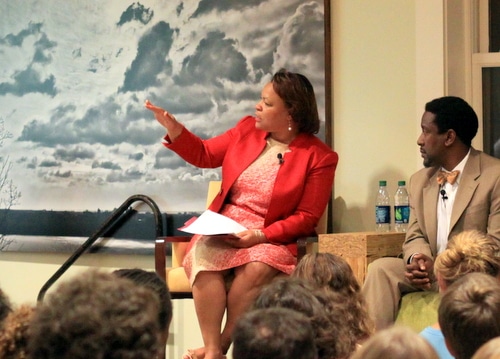 Mayor LaToya Cantrell participates in a panel discussion on gentrification at Tulane Hillel in 2015, while Flozell Daniels of the Foundation for Louisiana listens. ( UptownMessenger.com file photo)

Mayor LaToya Cantrell was smart to ask Governor John Bel Edwards to form a working group to identify funding solutions for New Orleans sewerage and drainage problems. Edwards is up for re-election in the fall and will need the support of the popular Cantrell and New Orleans voters. Unfortunately, there is only so much the governor will be able to do without identifying a new taxing source. So far the tourism industry has successfully fought back against Cantrell co-opting any of their existing tax dollars but has pledged to work with her on creating a small new tax.

Another option that the populist Cantrell could consider is a tax on the rich, which is growing in popularity nationwide, according to the New York Times. In a recent poll by the online research platform SurveyMonkey, a majority of voters favor such an effort. Even Republicans support presidential candidate Elizabeth Warren’s proposal to increase taxes America’s wealthiest based on net worth. Many Democrats consider it a “moral issue.” Sixty-two percent of those surveyed agreed that government should try to reduce inequity. The survey suggested a 2 percent tax for those with wealth above $50 million.

Proponents like Rep. Alexandria Ocasio-Cortez consider the tax as a way to resolve inequity problems not being adequately addressed by government. Inequity continues to be an on-going issue in New Orleans, a city where a large number of under-educated, non-homeowners are stuck in low-paying tourism industry jobs. But that doesn’t mean Cantrell would want to alienate her former Garden District and Uptown base who would be natural targets. New Orleans has always been a city with wide contrasts between the haves and the have-nots. A wealth tax based on any income level could trigger a new exodus to the suburbs, especially from older tax-payers.

It is far more likely that Cantrell will muster support for a new tourism tax. At some point, the tourism industry will feel the blowback from convention groups and leisure visitors for ever-increasing costs of hotels, rental cars, restaurants, and attractions. Perhaps Cantrell will add any future tourism tax to STR properties as well.

President candidate Kamala Harris will be in New Orleans this weekend to court African-American female voters at the Power Rising 2019 summit which opens today at the Hyatt Regency. The conference also features rising Democratic star Stacey Abrams, television personality Star Jones, former New Orleanian and law professor Melissa Harris-Perry and others. Harris, who enjoys Jamaican and Indian heritage, has placed a dozen African-American women in key campaign leadership roles. She has been criticized in some circles for calling herself a “minority” rather than of African heritage. Yet her biracial background will help her build coalitions and raise funds from grassroots donors. A protégé of powerful former California house speaker Willie Brown, the 54-year-old Harris is fashioning herself as a progressive populist, albeit one who grew up in a privileged environment. Harris attracted a large adoring crowd when she spoke at the Netroots conference in New Orleans last summer.

Add former school board candidate and insurance broker Durrell Laurent to the growing list of individuals expected to seek the House District 97 legislative seat being vacated by Joe Bouie. “I’m 90% in and will make a final decision right after Mardi Gras,” Laurent said yesterday. He has already launched a website (http://durrelllaurent.com) to receive campaign contributions. A member of the Orleans Parish Democratic Executive Committee, Laurent is president of his neighborhood organization and Einstein Charter Schools. Laurent says public health and education will be his two main issues. He believes the campaign will cost between $75,000 and $100,000. Other candidates expected to make the race include Matthew Willard and Eugene Green. School Board member Ethan Ashley could also join the field.

Armed with a clearance form from their probation or parole officers, thousands of formerly incarcerated New Orleanians who meet certain criteria will have the opportunity to register to vote beginning March 1. Supporters have scheduled a March 1st noon rally at Duncan Plaza to herald last year’s historic passage of Act 636. Voter registration will be open to formerly incarcerated individuals who have completed 5 or more years of parole and are also off probation.

Citizen SHE United along with the Democratic Training Committee will offer a free one-day training program for African-American women and their allies on Saturday, March 16 at Café Reconcile. Nia Weeks, Citizen SHE United founder, says the training is targeted to those interested in running for office, staffing a campaign or wanting to gain party and community leadership skills. The event kicks off with a Happy Hour at Victory Bar on Friday, March 15. Contact Weeks at 603-6616 or register online at traindemocrats.org.