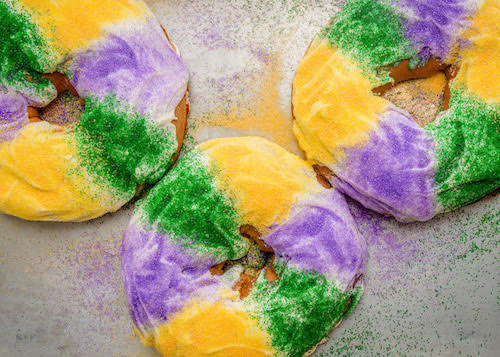 The local New Orleans grocer Breaux Mart has rechristened itself King Cake Mart on Twitter for the duration of the carnival season. That should give out-of-towners an idea of the importance of King Cake in our city.

As many in the world awaited Twelfth Night and the Epiphany or Three Kings Day to mark the ending of Christmas, New Orleanians impatiently ticked off the days until Jan. 6 for another reason: to signify the arrival of the carnival season and the blessed arrival of King Cake.

It’s the time for locals to play, feast, and attend endless parties, masque balls, and parades. But first, it’s time for an entire city to eat large circles of sugar-laden cake. Every. Single. Day. 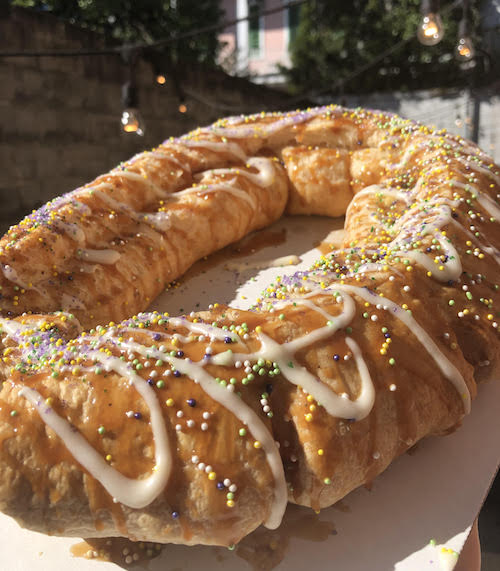 Before the year 2000, there was no question of which “type” of King Cake we could buy. King Cake was, simply, King Cake. Chances were, your King Cake was purchased at McKenzie’s Pastry Shoppe. New Orleanians had only two choices: the smaller round King Cake or the large oval classroom size. The cake was plain with no filling, akin to French bread, narrow with a thin crust, only barely sweet, and covered with loads of sparkly messy colored sugar crystals. King Cakes have changed since McKenzie’s Pastry Shoppe held sovereignty over the local court of King Cake.

This year’s awards for Uptown originality in King Cake are Sucre, District: Donut, Sliders and Brew and Gracious Bakery. 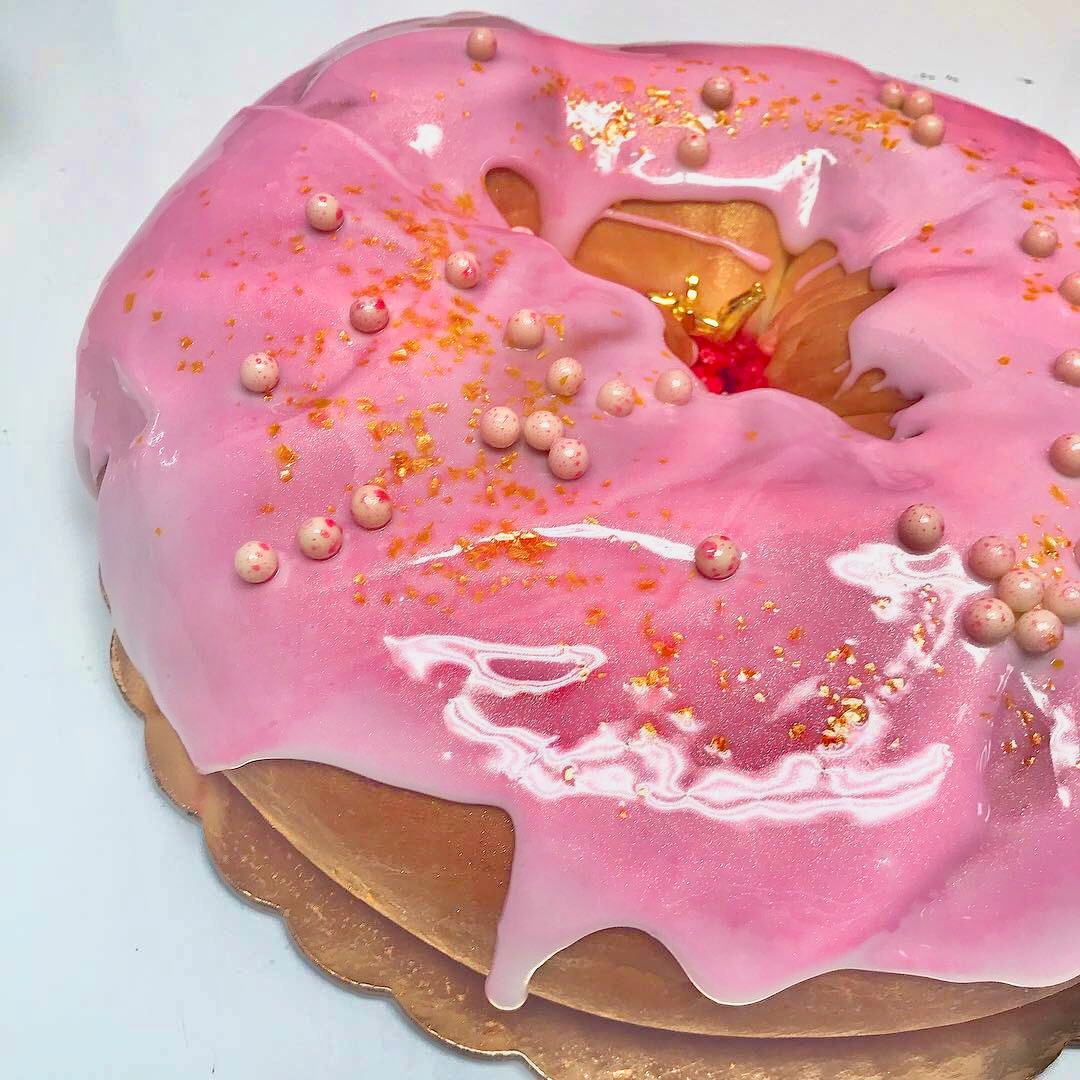 The beloved snowball flavor, Nectar Cream, reinterpreted by Gracious Bakery as a King Cake. The pink cream filling and pink with gold dust topping make it one of the more beautiful king cakes of the season. (via Gracious Bakery)

Not to be outdone, Gracious Bakery’s Chef Megan Forman brought back her homage to the city’s beloved snowball flavor in her Nectar Cream King Cake. The confection is a rosy pink gold luster dust atop the icing with gold dragees and a pink vanilla and almond cream filling. They also offer a Valrhona chocolate King Cake and a traditional cinnamon version and a flaky Galettes du Roi.

Shaya, the restaurant not affiliated with the chef of the same name, is offering a salted caramel and cinnamon babka King Cake. 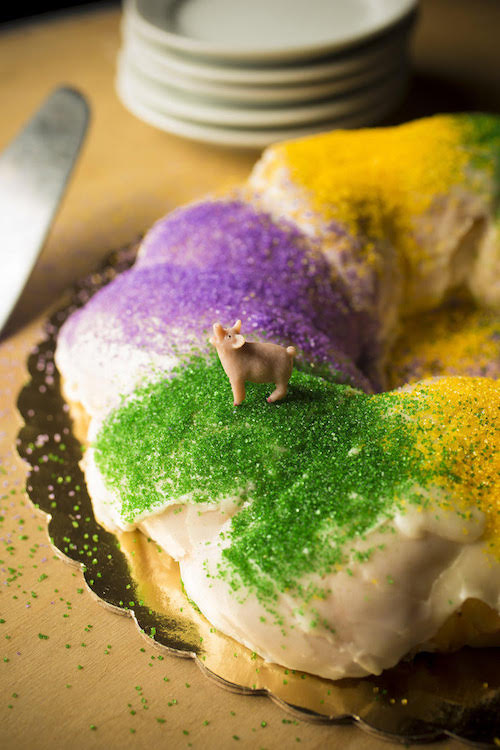 Uptowners can also buy King Cake at Tartine near Uptown Square, the Haydel King Cake pop-up at Sno-Bliz on Magazine, Breaux Mart, Whole Foods, and Rouses. Rouses has an enormous display of King Cakes with too many fillings to list.

Further afield, but worth the drive, Willa Jean has its popular cinnamon Caramel Crunch glaze with a cream cheese frosting King Cake. A 48-hour online preorder is recommended.

For Dong Phuong fans, the cakes are available for online order and this year offers Coconut, Pecan, and Strawberry King Cakes, as well as the Cream Cheese and Cinnamon.

The one thing all these cakes have in common is a sugary icing or glaze. Earliest memories of King Cake for most New Orleanians are the daily King Cake parties in grammar school throughout the Mardi Gras season. This was back when no one cared about sugar and carb intake. 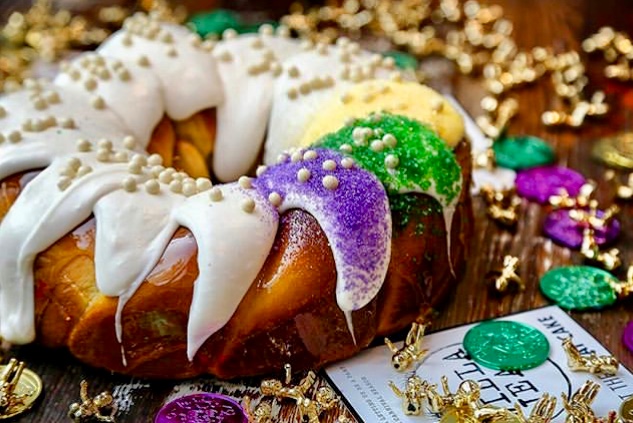 Regarding healthier options of King Cakes, I prefer the organic cakes at Breads on Oak for flavor and texture. A drive to Dorignac’s grocery in Metairie is still the best choice for sugar-free King Cake, and the Green Fork on Prytania offers a gluten-free and vegan King Cake to meet those dietary restrictions.

Change has also affected what might be found hiding inside the cake. This year, more and more vendors are substituting unique charms and trinkets inside the cake’s interior instead of a plastic baby. As with any change in New Orleans, not all locals are happy.

Traditionalists fear not — the majority of King Cakes are still sold with a plastic baby, albeit, in today’s overly cautious world, some vendors package them separately to be used at the buyer’s discretion.

On Monday, my old-fashioned Haydel’s Bakery King Cake arrived with the plastic baby hidden deep inside the moist, sugary cinnamon roll. My friend was delighted by the surprise when she found it, and I was grateful the tradition had been honored.