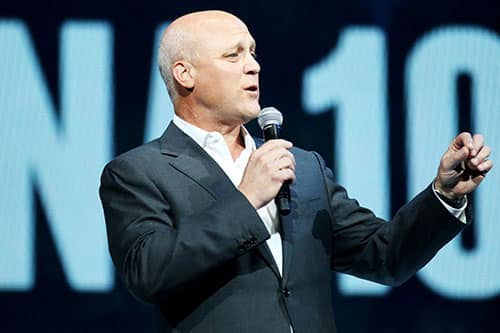 With little fanfare last July, former Mayor Mitch Landrieu created the E Pluribus Unum Fund which is serving as a fundraising vehicle to stay in the public eye — while contemplating a future in Washington, D.C. where the fund is based. “We are better together than we are apart,” the fund’s website (unumfund.org) declares.

With an initial focus on the American South, EPUF’s vision is to bring people together around common purpose, shared responsibility and opportunity rather than being divided by anger, hate and fear. Issues to be addressed include race, equity, economic opportunity and violence, as well as explore an institute for racial reconciliation, Landrieu told New York Times columnist Charles Blow in a recent interview about his often-discussed Presidential prospects. Landrieu is also serving as a Visiting Fellow at Harvard Kennedy School’s Institute of Politics this spring.

Joining him in the EPUF effort as registered agents are long-time confidants Norma Jane Sabiston, Ruth Kullman and Tyronne Walker who each bring unique strengths to the project. Sabiston worked decades on Capitol Hill for John Breaux, Billy Tauzin and Mary Landrieu and remains a powerful lobbyist. Kullman has been the family’s go-to fundraiser and has wide contacts among Louisiana donors and Jewish leaders around the country. An African-American Landrieu loyalist who now works for the Greater New Orleans Foundation, Walker will parlay his national foundation connections to keep Landrieu in front of the Rockefeller and W.K. Kellogg foundations, among others.

The fund is proceeding hand in hand with Landrieu’s book, which should earn him millions after an interview and solid endorsement by Oprah Winfrey, who called Landrieu “genuine.”

As a plethora of potential Democratic candidates for president continue to emerge, the national party will struggle to lock down a slate that actually has the capability to defeat President Trump, not just pick at him. Though Landrieu is currently positioning himself as a white Southerner, a different spin could emerge. Landrieu hopes his fund’s mantra will become a “Movement”. Considering the country’s current mood, anything is possible.

IS JEFFERSON PARISH READY FOR THEIR FIRST FEMALE PARISH PRESIDENT?

Yesterday’s announcement by dynamic Jefferson Parish Councilwoman at-large Cynthia Lee Sheng that she will run for Parish president against current president Mike Yenni, former president John Young and any other comers is a breath of fresh air. Like her father, the beloved former Sheriff Harry Lee, Sheng will bring a non-nonsense style, fresh ideas and abundance of energy to the race. New Orleans needs a strong partner to reach our regional goals. Sheng could easily fit that bill. This will be a campaign well-worth watching.

SMART HOUSING MIX ONLY PART OF THE ANSWER

It’s easy to generally support efforts that lead to more affordable housing. People at many income levels need good quality housing in safe neighborhoods that meets – not exceeds – their ability to pay. Going back to warehousing low income families in past configurations does not benefit the individuals or the greater community.

Columbia Parc, the former St. Bernard housing development, is an excellent example of how market rate and affordable housing residents can thrive within an environment that provides the amenities and services both groups need. Columbia Parc has a substantial waiting list because the neighborhood works for all. Though it may be painful to some developers, a smart housing mix is the future.

Unfortunately, smart housing is only part of the overall housing solution. More efforts must be geared to home ownership. The New Orleans Redevelopment Authority has done a good job of working with individuals who want to rehab blighted properties or build on vacant lots. The proliferation of STRs has lead to some blighted housing being brought back into commerce. Yet, hundreds of such properties still dot our landscape. Perhaps developers should think outside the box to determine how their can meet their smart housing goals by including off-site housing.

For those who believe women should have the final say on their reproductive health care needs, the recent 50th anniversary of Roe v. Wade was not exactly a celebration. Laws governing abortions and providers are becoming more restrictive. Planned Parenthood is constantly being blocked. Some say women have allowed this situation to worsen by not being more involved in the political process as candidates, elected officials and donors to those who support the issue or antagonists to those who oppose it. If Supreme Court Justice Ruth Bader Ginsburg retires during the Trump presidency, abortions could virtually cease to exist. Women still deserve the right to choose. Hopefully they will continue to have at least some say.