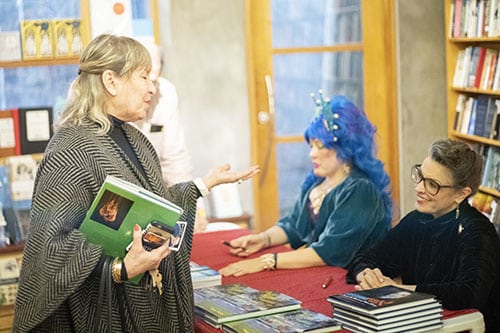 Areme Marks, left, talks with Poppy Tooker, right, after Marks got her copy of “Pascale’s Manale Cookbook” signed at Octavia Books on Saturday, Dec. 8. The book includes a history about the restaurant and its founders as well as select recipes from the restaurant. (Zach Brien, UptownMessenger.com)

Having published a book in 2015 on one of New Orleans’ historic restaurants, Tujague’s, her newest subject was a fitting next step.

“People said, ‘What do you want to do next?’ This [Manale’s book] seemed to be the only thing I could think of,” Tooker said. “This is the second-oldest continuously operating family-owned restaurant [in New Orleans]. So both Tujague’s and Manale’s are second to Antoine’s. That [Tujague’s] book has already been written.” 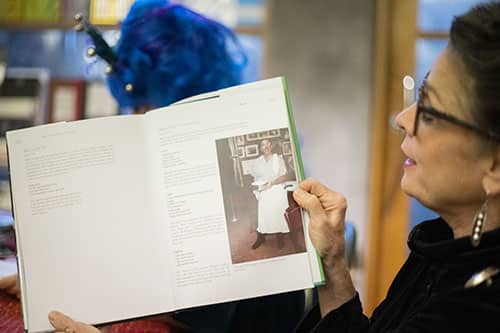 Poppy Tooker talks about “Uncle Jake” and his famous cheesecake at a book signing for her book “Pascal’s Manale Cookbook” at Octavia Books on Saturday, Dec. 8. The book includes a history about the restaurant and its founders as well as select recipes from the restaurant. (Zach Brien, UptownMessenger.com)

Pascal’s Manale, at 1838 Napoleon Avenue, opened in 1913. It is currently operated by the family’s 4th generation, including the father Savare DeFelice and siblings Andy, Bob, Mark and Ginn.

In order to write this book, Tooker used all the primary and secondary sources she could, studying the photos on the walls and in the attic, as well as working in the kitchen. Her work in the kitchen is where she got some of the biggest help. There, she met two long-time employees, Karry Byrd and Beverly Simon.

“[Karry] has been working in the kitchen for 42 years. He is the complete institutional knowledge and memory of this place,” Tooker explained. “Sweet Miss Bev—who has been there for more than 30 years—she knows all the recipes. These are the people who are really doing the cooking and really know what is going on.” 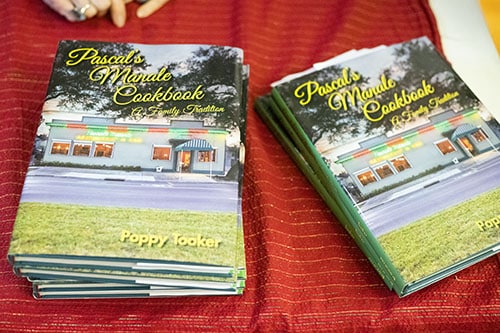 Tooker came across many stories during her research, but one sticks out in her mind. Pascal’s Manale is known for its long waits to get a table. People even had trouble getting through the front door when their name was called.

One family member, Martin Rodasta, Jr., managed the door from the 1960s through the 1980s. He recounted a story about a troublesome customer to Tooker:

“There was one night where some guy came in, and said, ‘Yeah Martin, how long for a table?’ Martin said, ‘It’s going to be an hour and a half.’ The guy said, ‘Oh no, I’m not going to wait an hour and a half.’  Martin said, ‘Come over here.’ The guy leaned across the bar— and I’ve heard this story substantiated in at least two places, so I know it’s true. It came from Martin’s mouth—He grabbed a hammer and nail from under the bar. He grabbed the guy’s tie and nailed the guy’s tie to the bar and he said, ‘No, you’re going to stay.’ And the guy did stay. When the table was ready, he was released from the bar.”

The “Pascals’ Manale Cookbook” presentation and signing took place on Saturday, Dec. 8. The book is now available at Octavia Books.