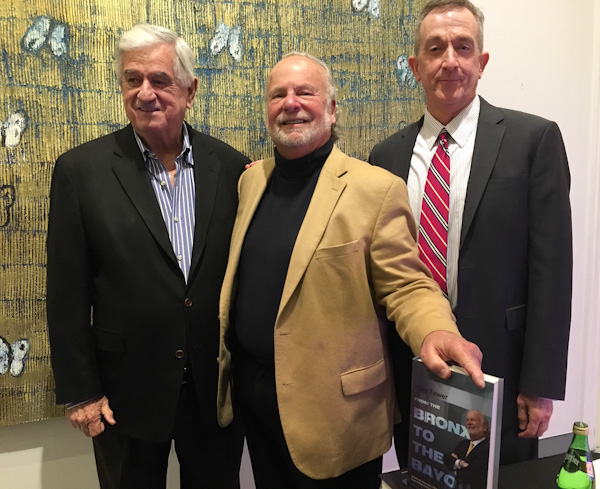 Surrounded by dozens of family, friends, and public officials, legendary criminal defense lawyer Michael Fawer unveiled his new memoir, “From The Bronx To The Bayou,” on Tuesday evening at Martine Chaisson Gallery. In concise, easy-to-read chapters that cover nearly every major case he ever handled, Fawer relives the hits and misses of almost 60 years representing some of Louisiana and Mississippi’s most colorful figures including Edwin Edwards, Aaron Mintz, Charles Evers, and Chief Judge Walter Nixon. Now in his early 80’s and on the verge of retirement, Fawer’s life has been his work. He tried more than 125 criminal cases to verdict and argued more than 25 appeals.

Educated at Cornell University and Columbia Law School, Fawer first served as an unpaid intern at the U.S. Attorney’s office in New York, then worked helping prosecute organized crime leaders under Bobby Kennedy at the U.S. Department of Justice in Washington, and back to New York City as an Assistant U.S. Attorney. Fawer grew up in the Bronx’s large, close-knit Jewish community where his mother helped resettle Holocaust survivors. He fell in love with the Crescent City after marrying a New Orleans native. Fiercely proud of his Jewish heritage, Fawer helped start a synagogue in St. Tammany Parish.

Before delving into the specifics of each case – including recreations of the handwritten closing statements to juries for which he is especially famous – Fawer presented a few thoughts in summation. “Our criminal justice system only works if we have a vibrant, vigorous and passionate defense bar,” he said. The most critical aspect is not the trial but the “screening” process when a staffer determines if a case should be tried. Oftentimes, Fawer explained, the decision to prosecute is one-dimensional with the defendant automatically becoming the underdog despite a “presumption of innocence.” Clients always deserve a comprehensive “voir dire” to weed out potential jurors who cannot be fair in a case because of some pre-conceived bias or personal experience. The art of cross-examination cannot be taught. Fawer mused that if today’s new judges were required to spend 30 days as an inmate in a minimum security prison, they would not be as likely to “cavalierly hand out 20-to-40 year sentences without flinching.”

Fawer admits he has often been described as “combative, feisty, belligerent, argumentative, and akin to a bantam rooster… but was always driven by an inner desire to win.” While representing Aaron Mintz who was subsequently acquitted of murdering his wife Palma, Fawer said presiding Judge Frank Shea was “a curmudgeon if ever there was one.” Fawer called NAACP leader Charles Evers “a fiercely independent political maverick with some conservative leanings… who was always willing to speak his mind and follow the path less traveled.”

He initially butted heads with U.S. District Judge Morey Sear who publicly excoriated him for wanting to postpone the start of a trial. Fawer said he “grew to love” tax evasion cases because there he achieved some of his greatest successes. Although he doesn’t often applaud the ethical conduct of prosecutors, Fawer thought U.S. Attorney Gerald Gallinghouse was worthy of praise. While “not unaccustomed” to sleeping jurors, Fawer was disappointed when U.S. District Judge Lansing “Tut” Mitchell snoozed during critical testimony in the case against Thomas Catalanotto. Of the defendants in the federal conspiracy case known as Brilab, Fawer liked Carlos Marcello the most, saying Marcello was a “quiet, friendly, unassuming guy, a real human.” He also thought the entire Brilab operation was “a case of entrapment.”

Fawer had an intense dislike for U.S. Attorney John Volz who personally attacked him in a letter to Fifth Circuit Chief Judge Charles Clark and for his behavior in the Edwin Edwards trial. “To Volz, Edwin was evil personified,” Fawer commented. “I found him (Volz) willing to play with the rules, to overreach as a prosecutor.” Fawer’s summation in the Edwards case on May 8, 1986 lasted well over three hours. Though Edwards was acquitted in that trial, Fawer was not able to prevent Edwards from later going to prison. “Juries were the wild card. You just never knew,” Fawer said about the case against Curtis Kyles who was convicted of murder. The Kyles case is just one example of “a long line of cases in Louisiana in which prosecutors knowingly withheld exculpatory material. To my knowledge, not one offending prosecutor has ever been disciplined for their unethical and immoral criminal conduct.”

Occasionally Fawer was praised by a member of the federal bench such as when District Court Judge Lance Africk wrote Fawer after losing Henry Dillon’s sexual abuse trial. “Although the outcome was not that which you hoped for, I have never been more proud of a member of the criminal defense bar. You were nothing short of brilliant and you left no stone unturned,” exclaimed Africk.

Fawer spent nine years – on and off – defending Congressman William Jefferson and members of his family. “Jefferson was charged with 16 counts of public corruption alleging he had misused his Congressional position to further business ventures in Western Africa. “Jefferson was far less skilled in business than he was in politics. But I never thought that Jefferson had used his Congressional office to do anything untoward in the matter,” Fawer said. Jefferson was released in 2017 after the U.S. Supreme Court redefined public corruption in a separate decision.

Fawer firmly believes that federal prosecutors should play by the rules. “I consider the area beyond the rails in the courtroom a war zone, not a dance floor…but I get pissed when a prosecutor’s arguments fly in the face of reality…When prosecutors hide facts or don’t call witnesses whose stories might conflict with their views of the case, I will attack them. “ Fawer says writing this book – which he worked on five hours per day for six months – gave him the opportunity look backward to the excitement of past trials. A cancer survivor now living in West Lakeview, Fawer is content spending his days on the tennis court or with family and friends. It is unlikely Fawer will take on any new cases but his legend will live on.

“From the Bronx to the Bayou” is available from Baton Rouge-based publisher Lizburn Press, 225-922-9936.

Though the ballot in Orleans Parish only includes three items – a judicial runoff between Omar Mason and Marie Williams, the Secretary of State competition between Kyle Ardoin and Gwen Collins-Greenup, and a proposition to add a member of the City Council to the Sewerage & Water Board – it is important for all citizens to get out and vote Saturday. Polls open at 7 a.m. and close at 8 p.m.