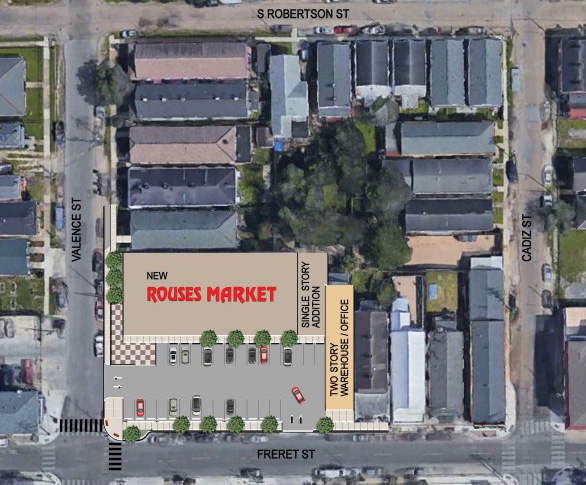 An aerial map of the Rouses site on Freret Street. (courtesy of JMR+H Architects)

A proposed Rouses Supermarket on a busy stretch of Freret Street will have all the amenities shoppers would expect from their other stores, but on a much smaller scale, representatives from the project told a community meeting on Wednesday.

The planned 10,000-square-foot Rouses would go at the site of the former Bloomin’ Deals thrift store — the site of Wednesday’s meeting — with a warehouse and office space on property next door at 4617 Freret Street.

The planned overhaul of the northeastern corner of Freret and Valence streets was met with strong support from neighbors, who call the area a “food desert.”

“Are y’all firm on the 2020 opening? Can it be next week?” said Michelle Ingram, who owns nearby Zeus’ Place and lives in the area.

Should the city approve three conditional use permits Rouses wants — to sell alcohol, expand the former Bloomin’ Deals space by 1,500 square feet and create a commercial space next door — construction would go forward in August with the store set to open by 2020.

The store’s size would be about one fifth of a typical Rouses, according to Rouses’ vice president of real estate, Charles Merrell, with only the 4,500-square-foot French Quarter location on Royal Street being smaller among the brand’s 60 locations.

The Rouses on Tchoupitoulas Street, for example — right now a common grocery store choice for Freret residents — is around 70,000 square feet, Merrell said.

“It might not have 15 kinds of ketchup, but it might have two,” he said of the proposed store at the meeting.

What the store will have, though, is an indoor/outdoor seating area, prepared food options and fresh seafood — all amenities shoppers find at other Rouses, Merrell added. But, much like the ketchup choices, those offerings may be on a smaller scale than what shoppers might be used to.

The store is also expected to have around 30 parking spots, and plans for delivery trucks to be able to drive right to the storefront — eliminating any need to block a lane of traffic.

To compensate for the limited parking, the store will also have smaller carts and fewer of them, compared to other locations, Merrell said, adding, “If we ran our full complement of carts, we wouldn’t have any parking.”

But nearby residents seemed unconcerned with those issues, saying any grocery store is desperately needed in the Freret neighborhood. That’s why Merrell said Rouses has been eyeing the location for the past several months, to fill a “gap in the market.” 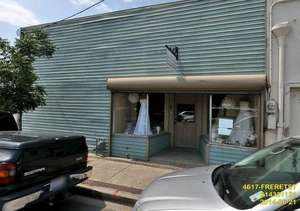 The Bloomin’ Deals locations at 4645 and 4617 Freret have sat vacant since August, when the nonprofit Junior League of New Orleans sold the buildings.

Though the proposed store is a long way from setting hours, Merrell said those will most likely be from 7 a.m. to 11 p.m.

“This has been a food desert for 30-plus years,” said Connie Jackson, whose family has lived in the Freret neighborhood on Upperline Street for more than 60 years. “This is a really, really long time coming.”​