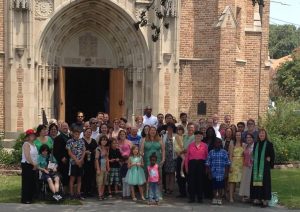 Festivities will begin on Saturday, Nov. 10, with a Birthday Bash for all ages at the church, located at 5401 S. Claiborne Ave. Activities will include a scavenger hunt and a bounce house, along with food and beverages hosted in the churchyard. The bash will be held from 2 to 5 p.m.

On Sunday, Nov. 11, the church will hold a Celebration Worship Service in the sanctuary, led by Rev. Dr. William Mackintosh (former minister of the congregation), Rev. Kathy Crighton, and Elder Tracy René Helms-Capasso. The service will be followed by cake and refreshments. Worship begins at 11 a.m.

The church that would become First Presbyterian was launched at a public meeting on February 9, 1818, when a “donation list” was opened to purchase a lot and build a church. That first building was erected by January 1819. In 1938, the church moved to its current location at 5401 S. Claiborne Ave.