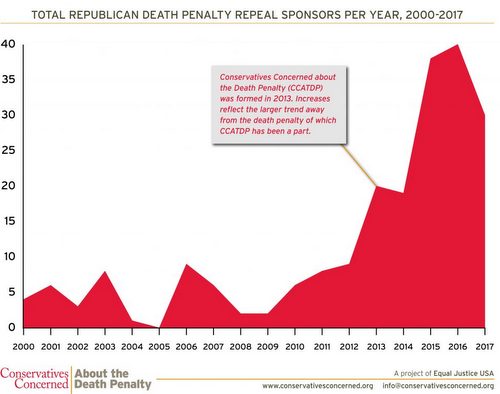 While abolition of the death penalty has long been considered a liberal policy goal, a new group of conservatives activists say it fundamentally conflicts with their view of a limited government, and they are now organizing an effort to end its practice in Louisiana.

In 2013, the number of Republican lawmakers proposing legislation to end the death penalty in their states more than doubled from single digits to 20, and doubled again in in 2016 to 40, according to a group called Conservatives Concerned About the Death Penalty, which sponsored a forum on the issue Thursday evening at Tulane University. Likewise, nearly a third of the co-sponsors of bills abolishing the death penalty were Republicans in 2016 and 2017, up from nearly zero a decade ago, the group’s research shows.

Louisiana is among those states, with legislation to eliminate the death penalty in 2017 sponsored by Republican state Sen. Dan Claitor of Baton Rouge, whose conserative bona fides include honors from the Louisiana Family Forum. Claitor’s stated views that the death penalty is expensive and ineffective fall right in line with the thinking being adopted by many other conservaties, said Hannah Cox, a national organizer for Conservatives Against the Death Penalty.

Cox was still strongly in support of the death penalty when she first began working in conservative politics, she told the crowd at the Tulane panel. But when asked to research a bill regarding the death penalty for the mentally ill, she began to examine the policy’s effects for the first time, and became convinced that it contradicted her conservative principles.

“People who have never been to prison think that life is the most valuable thing they have, but it’s actually freedom,” Cox said, noting that many death-row inmates give up on the appeals process and submit to execution as a way of ending their incarceration. “When you lose your freedom, you realize that.”

Michael Cahoon, a local organizer for the progressive Promise for Justice Initiative, said he was asked to join the penalty to provide the “liberal” perspective on the issue. But raised as a Catholic opposed to it for religious reasons, Cahoon said he feels the issue fits clearly as a conservative one.

“I actually think the conservative case against the death penalty is much more direct — a limit on government power,” Cahoon said.

Cox and Cahoon laid out a number of objections to the death penalty:

The death-penalty opponents found few critics in their audience of 50, most of whom were college-aged. One man questioned whether isolating death-row inmates makes the general prison population safer, but Cahoon and Cox said that there is little evidence that the murders placed on death row are more dangerous than those who plead to life, and that better measures can be used to ensure safety in prisons anyway.

While some opponents of the death penalty envision a sweeping federal decision to repeal it, Cox said that Conservatives Concerned About the Death Penalty has decided that a state-by-state approach is more effective. For one thing, a single federal decision abolishing it could be overturned by a subsequent federal decision, essentially reinstating it yet again. State-level actions, by contrast, would have to be overturned individually.

The effort is also playing out in state legislatures — and must do so in Louisiana, Cahoon said, where the state Constitution does not lend itself to challenging the death penalty through a court decision. Claitor has already begun building allies for his work in Baton Rouge, however. His 2017 bill passed a Republican-majority committee, and both state Sen. J.P. Morrell and state Rep. Terry Landry (two Democrats) have introduced similar bills — and activists predict the Catholic Church, opposed to the death penalty for decades, can be a particularly influential ally in the state.

“It’s not partisan, or bipartisan, even. It’s nonpartisan,” Cahoon said. “Especially in Louisiana, you have nonpartisan reasons that really bring people together.”

In order to support those efforts, Conservatives Concerned Against the Death Penalty is forming a chapter specifically for Louisiana, Cox said. They hope to have the structure in place by the end of the year, so they can begin work during next year’s legislative session.