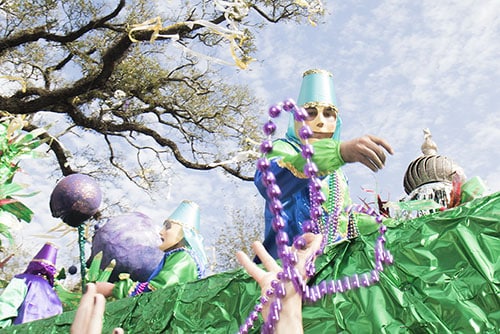 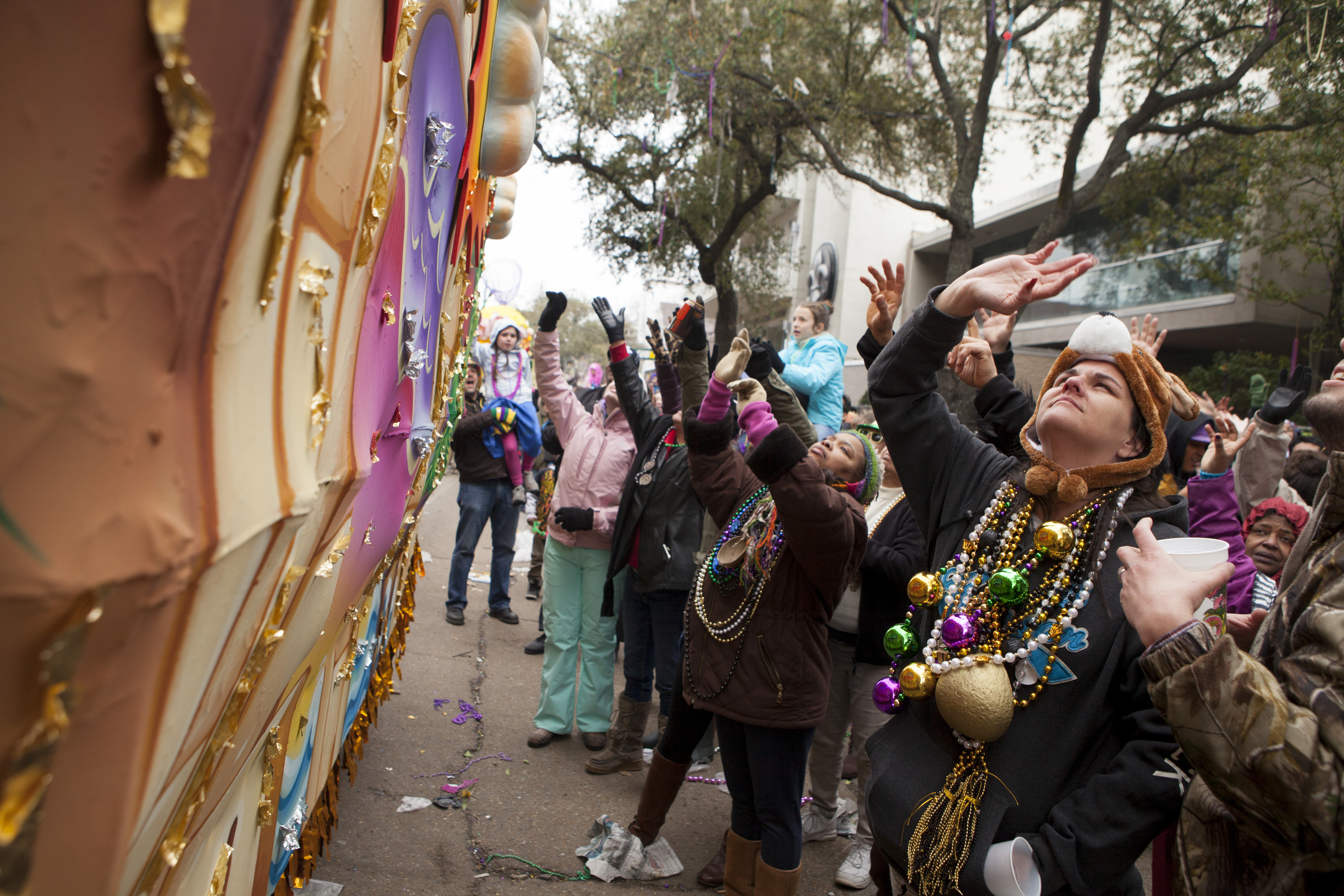 “Why are we celebrating Mardi Gras ankle deep in trash?” asked Kirk Groh of Verdi Gras, a group devoted to reducing the trash Carnival generates.

But, as the panelists pointed out, Mardi Gras traditions have always been in flux, and this year’s new customs quickly become next year’s established traditions. Beads did not appear until after World War I, according to Magill. During that period, strings of glass beads manufactured in Czechoslovakia appeared in parades as souvenirs from the krewes.

“Education in New Orleans is not the best, but kids knew how to spell ‘Czechoslovakia,’” joked Magill.

Throws in the modern sense appeared in 1960, when krewe members started throwing doubloons from their floats. They were an instant hit.

Renewed trade with China opened the doors to cheap plastic beads. It was at this point that beads as we know them came into the Mardi Gras market.

But once again, it wasn’t always this way. In the late 1960s, most of the waste collected after parades consisted of beer cans. Fifty years ago, throws were not as abundant as they are today, and they were not left in the street nearly as often.

“It used to be if you went to the parade and caught a few beads, that was pretty good,” said Carnival historian Errol Laborde, the moderator of the panel.

With time, however, as the “superkrewes” strove to outdo each other with more and more extravagant quantities of throws, the number of beaded necklaces left in the gutters also grew.

“The beads are no longer as sexy as they once were,” said Magill.

Unfortunately, the cosmetic problem of litter is only a small part of Mardi Gras throws’ “externalities”—the unaccounted-for costs of the products. Not only do plastic throws clog storm drains, they are can contain harmful chemicals. In a study conducted 2013, researchers found strings of plastic beads with extremely high levels of contaminants; one colored coating tested at over 29,000 parts per million of lead—when the legal limit is 90 parts per million. Beads are not only for adults—children are present at every parade and are highly favored for throws.

Panelist Judy Boudreaux sees “a Carnival where krewes can use throws and value them on quality, not quantity.” Boudreaux is working to develop Threaux Inc., a company hoping to build a factory to manufacture Mardi Gras throws here in New Orleans. The idea is to keep the money that krewes spend on throws here in the community and provide jobs for community members as well.

However, Boudreaux acknowledges that locally made, higher quality products can come with a much higher price tag than imported plastic goods.

“We’re going to have to want to invest in the future,” Boudreaux said.

However, rather than a grim future based on frugality, Boudreaux sees one of innovation and artistry.

“We can hire New Orleanians to design the product and create it, leading to local economic development,” she said.

There are already examples of hand-crafted throws that are relatively rare and valuable—the coconuts of Zulu and the shoes of Muses come to mind.

‘We are the brand’ “What we do is a way of life,” said Mardi Gras Indian Cherice Harrison-Nelson. Harrison-Nelson is a queen of the Guardians of the Flame. She points out that though many of the city’s lauded traditions are based off cultural traditions that came with enslaved people from Africa, African-American New Orleanians rarely see the profits that New Orleans reaps from its cultural economy, and part of her involvement in Mardi Gras is acknowledging the African heritage embedded in many of New Orleans’ traditions.

“Where are my people?” she asked rhetorically. “This is a great event, but it represents a changing of demographics, too,”

As an artisan who creates intricate beaded suits that are valued in the tens of thousands of dollars, Harrison is no stranger to the idea of a Mardi Gras with a tradition of high-quality artistry rather than single-use items.

“We ARE the brand. We are the resistance of not allowing someone to tell us what is beautiful, where we can move in our community,” Harrison-Nelson said. “There is a self-actualization of being yourself that is so vital to the human spirit. This is the way that we can truly soar and be.”