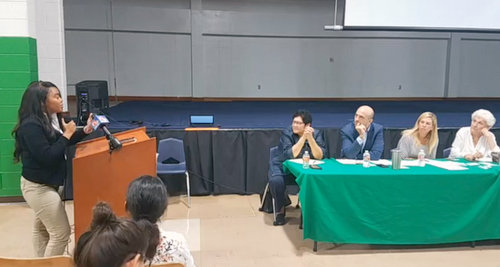 After an unexpectedly low student enrollment this fall at Walter L. Cohen high school and Crocker elementary led to a handful of staff layoffs by the New Orleans College Prep administration last month, teachers and families from both schools pleaded with the charter network’s governing board to find a way to shore up the struggling school communities.

The New Orleans College Prep administration had budgeted for 930 students this year, 560 at Crocker and 370 at Cohen. Instead, both schools missed that target by about 20 students, costing the network nearly $450,000 in state per-pupil funding this year.

The drop in enrollment was unexpected at both schools, said CEO Jonathan Tebeleff. Cohen usually receives many of its students — 50 or 60 per year — during the summertime “late enrollment period,” but this year has only enrolled six during that time. Meanwhile, Crocker has usually been fully enrolled this year — but this year is one of 35 schools across the city with vacancies in the second grade.

“That’s part of why the timing of this was late, is because we’ve traditionally gotten students at this point,” Tebeleff told a crowded auditorium of parents, teachers and students at the board’s Sept. 24 meeting.

Michelle Gasper, a parent, told the board that the staff members are what drew her to bring her children to College Prep schools, and urged the board to do anything it can to raise enrollment and rebuild the staff.

“We’re supposed to be good stewards of the budget, and education is the goal,” Gasper said. “I believe cutting the staff is doing a disservice to your students, and not living up to the mission of the school.”

Satoriya Lambert, an 11th-grade student at Cohen, said she has been without a consistent teacher for Algebra 2 since the beginning of the school year. Keyinate Gibson, another Cohen student, said the subsitutes sometimes have to ask the students for help with the day’s work.

“We haven’t learned anything. We’ve been learning the same lessons for the past two or three months,” Lambert said. “Some of these teachers make a difference in a lot of our lives.”

Audrey Johnson, a preschool teacher at Crocker, spoke on behalf of a social worker at Crocker who was among the layoffs. The social worker was an early champion of trauma-informed education at Crocker that is now a model across the city, as well as secured thousands of dollars in grant funding for the effort.

“One of the biggest problems facing inner-city charter schools is poor staff retention,” Johnson said. “How do you expect to retain staff members when you eliminated those who have been here since the beginning? It seems our time and dedication to this organization and our kids comes down to nothing more than numbers on paper. I can tell you firsthand that morale is very low.”

The other teachers at Crocker said they would have gladly taken a pay cut to keep the social worker on staff, Johnson told the board.

“A lot of what has been cut, the mental-health services, are now going to be falling on us as teachers,” said Jasmine Zobrist, another College Prep teacher. “That’s not going to be doable for any teacher, to be great at instruction and be a social worker.”

School officials outlined a number of steps they are taking to improve communications with families, such as creating new parent-teacher organizations and student-advisory committees at each school. The board members took no action following the public comment, but did express support for the decisions made by CEO Joel Castro and the administration.

“We as a board support the actions our CEO took,” said board chair Patrick Rafferty. “The CEO at the end of the day has to mind the finances as well as the overall programmatic footprint. As you heard, the budget for 2019 is very thin, and there’s very little wiggle room. We had to take an action, and it pained us to take those actions.”