Residents near Freret Street — both those that have been there for generations and more recent newcomers — have clamored for years for a neighborhood grocery on the commercial corridor.

With the announcement this week by Rouses that they are planning a location in the location of the former Bloomin’ Deals thrift shop — practically across the street from another ongoing grocery project in the former Publiq House space — those residents may soon have two groceries to choose from.

After the Junior League of New Orleans closed the thrift shop at 4645 Freret, the nonprofit sold it Aug. 1 to a private investment company called SSJ Investments registered to Andrew Jacobs (who was also involved in the redevelopment of the large former Weber Garden Center two years ago). The sale also included the parcel and building adjacent to Bloomin Deals at 4617 Freret, which the Junior League had used for bridal dress sales.

“Founded in 1927, Bloomin’ Deals served as a thrift store and low-cost coffee/lunch shop for working class residents of the French Quarter. Just as that neighborhood underwent a significant transformation over the years, the Freret corridor has changed dramatically in the last decade,” wrote Junior League president Alice Franz Glenn. “JLNO has been proud to serve as an anchor of the Freret neighborhood during its renaissance and is optimistic that the new owner of these properties will again meet a critical community need in this location.” 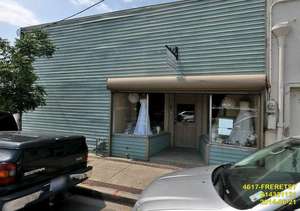 In a letter required by the city’s Neighborhood Participation Program and dated Monday, Rouses president Donald Rouse says he is negotiating a lease for both properties. The Bloomin Deals site would be renovated and expanded from its current 8,500 square feet to 10,000 square feet, and the smaller building at 4617 Freret would be torn down and replaced with a structure with a food-preparation area, warehouse space and regional offices for Rouses.

The company hopes to start construction in August 2019 and open the store in the summer of 2020, Rouse says in the letter.

Rouses executives will hold a public meeting at 5 p.m. Wednesday, Nov. 7, in the former Bloomin’ Deals building to discuss their plans.

The request by Rouses is the second grocery proposal to go before Freret residents in recent months. Green Coast Enterprises and the Neighborhood Housing Services are partnering to create what they have described as a small urban grocery in the former Publiq House space at 4528 Freret, with new condos built over the parking lot there.

Their proposal has drawn fire from some neighborhood activists who say the space should either be housing or a grocery, but is too small for both. Despite the opposition, the Green Coast project received a favorable recommendation from the City Planning Commission by a 5-2 vote in September, and is now awaiting a final decision from the City Council before a Nov. 19 deadline.