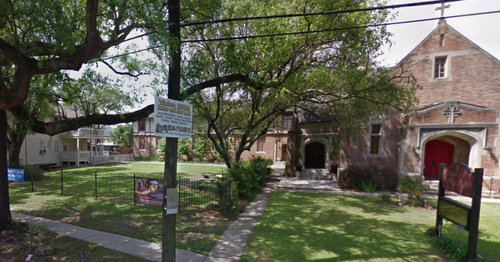 The property at 4505 South Claiborne Avenue. (photo via City of New Orleans)

A new radiology office is planned for a vacant portion of the South Claiborne Avenue property occupied by the Church of the Annunciation, and it has received initial approval from the City Planning Commission.

In order to allow a medical office, the Church of the Annunciation needs to change the zoning at 4505-4535 South Claiborne and 3000-3010 Jena from two-family residential to medium-intensity mixed-use. The parcel at 4519 South Claiborne — now used as a parking lot adjacent to the existing brick church and two-story house currently used as an office — has already been sold to a doctor who plans to build a new office there, consultant Rick Eisenstadt of Sherman Strategies said in a hearing on the zoning change last week before the City Planning Commission.

“Our client here is a local radiologist, Dr. Jonathan Amite, who envisions putting an imaging center on this location, which we think is very consistent with the unofficial medical corridor that it sits next to,” Eisenstadt said.

No one spoke against the project before the City Planning Commission, though some neighbors did write to the commission with concerns. Ann Sens and Glen Steeb, both of whom live on nearby Cadiz Street, had attended an earlier meeting with developers, and each wrote to the commission saying they would prefer to see the rezoning only apply to the actual area where the medical office will be.

“I strongly oppose the rezoning of the entire property, as then it could be used for commercial interests such as bars, convenience stores, tattoo parlors or the like,” Steeb said. “Attendees of the meeting I mentioned were told that the doctor only needed a parcel of the land for use PRIMARILY as the radiology facility. Why does the entire property have to be rezoned?”

City planners noted that the recent revisions to the master plan had already changed the site’s future land-use designation from low-density residential to medium-density mixed use, which the medical office fulfills.

“The MU-1 Medium Intensity Mixed-Use District would allow by right a wide range of uses such as bed and breakfasts, group homes, art studios, retail good establishments, personal service establishment, pet day care service, arts studio, day cares, medical clinic, etc.,” according to the planning staff report. “The uses that are permitted by right in the MU-1 District would be more intensive in terms of pedestrian and vehicular traffic, demand for on-street parking, litter, and noise generated than those residential uses allowed under the current zoning. However, these levels of noise, traffic, and parking demand should be minimal in comparison to the adjacent commercial uses.”

The commission voted unanimously in favor of the project, sending it to the full City Council for final decision with a recommendation of approval.