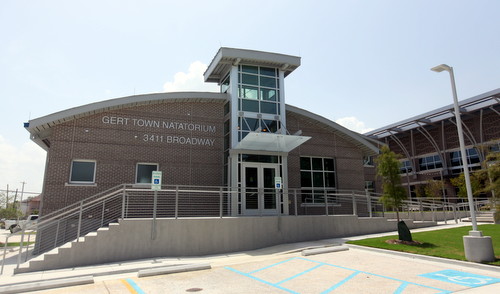 The newly constructed Gert Town Natatorium — next door to the recently-completed New Orleans Police Department Second District station — is now open to swimmers, with classes scheduled throughout the day, according to city recreation officials.

The indoor pool shares the same 3411 Broadway Street address with the new police station next door, which opened earlier in September. It is open from 8 a.m. to 8 p.m. weekdays — though it closes from noon to 1:30 p.m. on Monday, Wednesday and Friday for cleaning — and also from 9 a.m. to 2 p.m. on Saturdays. It is closed on Sundays.

“The new 15,000 square foot facility houses a six-lane, 25-yard indoor competition swimming pool and shares a community plaza with the neighboring Second District Police Station,” according to the New Orleans Recreation Department Commission. “The facility also has men’s, women’s and a family locker room area as well as a snack bar.”

The NORDC website lists daily swimming lessons for all ages from preschool to seniors, as well as high- and low-impact water aerobics and other classes.