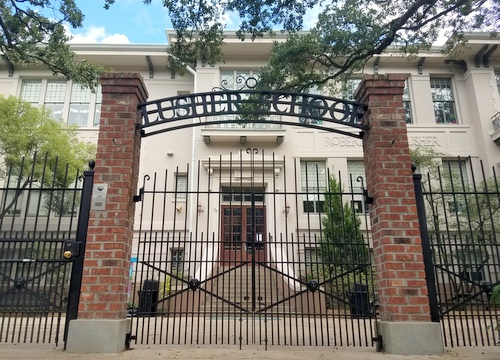 Lusher Charter School will reserve a portion of its kindergarten seats for students from economically disadvantaged families in the next school year, partly in response to removing the neighborhood-based admissions district two years ago, officials said Saturday morning.

Based on policies adopted by the Orleans Parish School Board, Lusher stopped granting automatic admission to children of families in the small Carrollton neighborhood around its Willow Street campus following the 2016-17 school year. As a result, Lusher’s admissions were subsequently comprised primarily of students who scored well on its entrance exams, children of Tulane University employees, and younger siblings of current students.

In the two school years since the neighborhood district ended, Lusher has observed a drop in admissions for children from low-income or otherwise socio-economically disadvantaged families, said CEO Kathy Riedlinger. After consulting again with the Orleans Parish School Board, Lusher is planning to reserve a portion of its incoming kindergarten classes for children from at-risk families.

“The goal is to try to do something to try to make up for the loss of the neighborhood for us,” Riedlinger said.

While the exact number and format remains to be finalized with the Orleans Parish School Board, Riedlinger said Lusher is “leaning toward” reserving 10 percent of kindergarten seats for disadvantaged students. That 10 percent will be selected early in the admissions lottery, and the remaining disadvantaged students not chosen as part of that group will then have their applications considered again as part of the broader pool of applicants — essentially giving them a second chance at being chosen.

The state’s definition of “at risk” students can be based on several different criteria — but is most often students who receive free and reduced lunches, Medicaid, or qualify for HeadStart preschools, said Sheila Nelson, the school’s director of planning. The school will simply accept whatever documentation used by the state from families, Riedlinger said.

“I don’t think we should ever get into the business of determining who’s disadvantaged,” said board member Richard Cortizas. “We should just use the federal guidelines.”

The elementary school is already increasing recruitment efforts to ensure low-income families know about the open kindergarten seats, said elementary principal Jan Rice. School officials are planning visits to preschools and churches to increase awareness of the change, and extending the office hours when applications can be submitted. The change may represent a significant new administrative burden for the school, however, if hundreds more applications are received and have to be processed, Riedlinger noted.

Board member Alysia Loshbaugh praised the staff for adding the hours to receive the admissions materials on evenings and Saturdays. Getting to Lusher to submit the documentation during work hours is a hardship for many families, Loshbaugh said.

Board member Reuben Teague likewise hailed the change as a positive step for Lusher, and said he hopes the discussion continues into the strategic planning process the school is embarking upon ahead of the expected assignment of the Allen building to Lusher. All of the contracts and principles that govern the Lusher admissions process should be evaluated in light of the school’s mission, he said.

“I think it’s great the school is doing this,” agreed board member Reuben Teague. “I’m really glad the administration is taking this challenge on.”

While the change is designed to add socioeconomic diversity, it will not necessarily change the “academic diversity” of the school, Riedlinger said, because all the students will still have to qualify for admissions using the same exams and other criteria. In some ways, Riedlinger said, the new policy will be less a change and more a return to the norm for the school, bringing back a student population who had only been missing the last two years.

“This is not going to be anything new for us,” Riedlinger said. “We have never held to the exclusivity that many other magnet schools hold.”

Lusher’s charter renewal is up in 2021 — along with Benjamin Franklin High School and Lake Forest Elementary, two other selective-admissions schools — and Reidlinger said the Orleans Parish School Board may require more changes to their admissions processes at that point. But the citywide attention to Lusher’s admissions process highlights the broader shortcoming in the city’s education system, Riedlinger said — the dearth of high-performing schools.

“Every since I came to Lusher, there have been people who weren’t happy about who gets in,” Riedlinger said. “The problem is, we are packed. For many years I took that on as Lusher’s problem. The lack of quality seats in the city is the problem. There will never be enough seats to meet the demand.

“I understand the concerns and I understand the problems, but this is a much bigger problem than ours,” Riedlinger continued. “We can’t fix it by ourselves. We ought to have outstanding schools all over.”

The discussion of the new policy took place during the Lusher board’s annual planning retreat Saturday at Jones Walker law firm in downtown New Orleans. Among other issues discussed, the board selected Cortizas as its next president.