The warehouse at 1152 Magazine Street is slated to be renovated into a venue for “The Fallen Saint” immersive theatre production. The taller building between it and the Pontchartrain Expressway is not part of the proposal. (via city of New Orleans)

The controversial proposal to convert a former Lower Garden District warehouse into a venue for a permanent new-to-New Orleans immersive-theatre production called “The Fallen Saint” won unanimous approval from the City Council on Thursday — overcoming ardent opposition from some nearby neighbors by agreeing to an exhaustive list of operating conditions described as without precedent in the city. 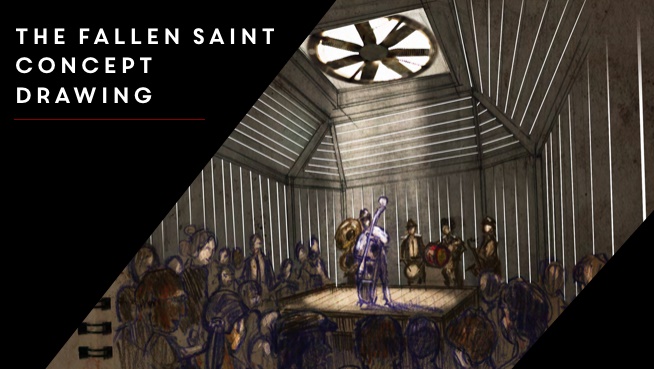 Lower Garden District residents Seth and Rosa Dunlap are seeking a conditional-use permit for an indoor amusement facility at their property at 1152 Magazine Street, so they can convert the former warehouse into a permanent venue for a new immersive-theatre experience to be called “The Fallen Saint.” The show’s New York based producers — veterans of the acclaimed Blue Man Group production — describe the concept as an interactive theatre event based on Prohibition-era New Orleans, where patrons will mingle with performers in small-group settings, singing along with them around a piano together instead of observing the music from a seated audience.

Most of the debate at Thursday’s City Council meeting over the request followed the same contours as previous debates over it at previous hearings of the City Planning Commission or the Lower Garden District Association. The Dunlaps promised a high-class artistic endeavor just steps from their own home that will employ 200 people and add a new element to tourism in New Orleans. Opponents described fears of around-the-clock noise, unchecked litter, unruly tourists and substance abuse in front of their homes, and attorney David Halpern argued that the entire request was predicated on a faulty reading of the city’s land-use classifications.

Finally, Lower Garden District Association president Ryan Kropog reminded the council that his group had tried to strike a good-neighbor agreement with the Dunlaps restricting the permit to only their project, but the Dunlaps declined, so the association decided to take a neutral stance on it.

What was new on Thursday was the intervention of District B City Councilman Jay H. Banks, who said he and his staff had still been drafting strict new requirements as late as Thursday morning to ensure the venue did not create an undue burden on its neighbors.

“The idea of doing something that is detrimental to a neighborhood is foreign to me,” Banks said, describing his own childhood growing up around the corner from a problem bar. “I promise I will not suggest to do anything to put that burden on someone else.”

The Fallen Saint venue has ignited intense passions from both its supporters and opponents, Banks continued, and he and his staff have listened to their opinions so extensively that both sides got tired of dealing with his office. The effort he and his staff undertook, Banks said, was to find a middle ground on every concern:

Each of the provisos was designed to strike a compromise, Banks said, between the benefits of creating new jobs and investment versus protecting the neighborhood.

Banks reiterated repeatedly that if the venue violates the provisos, the owners will lose their right to operate it.

“If they violate, the conditional use can be taken,” Banks said. “As long as I am here, it will be taken.”

Other council members expressed concern about the attempt to fit such a large project onto the edge of a residential neighborhood, but ultimately Banks’ assurances that the operators will be held to the strictest standards ever imposed in New Orleans won them over for a 7-0 vote in favor of the project.

The project has one final hurdle, however. Opponents of it have appealed the city’s previous ruling that the venue should be classified as an “indoor amusement facility,” and the Board of Zoning Adjustments must decide that question at an upcoming meeting.

“Residents are now appealing the decision by the city zoning administrator,” the opponents’ “Lower Magazine Neighbors” group said on their Facebook page. “It is unfortunate the city council voted against protecting neighborhoods today.”

Councilmembers Helena Moreno and Joe Giarrusso III both expressed particular concern about the zoning issue. Banks assured them that he will not draft an ordinance allowing the Fallen Saint if the Board of Zoning Adjustments rules against it, but that based on his previous conversations with city staff members the classification is likely to stand.

See below for full video of the hearing: