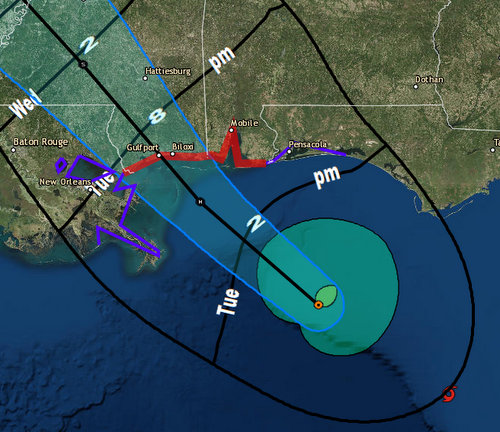 Tropical Storm Gordon is expected to continue to strengthen into a Category 1 hurricane today as it marches across the Gulf of Mexico before making landfall this evening, likely on the Mississippi Gulf Coast.

As of 10 a.m. Tuesday, Gordon’s maximum sustained winds were 65 mph, and expected to strengthen to 75 mph by 7 p.m., classifying it as a Category 1 hurricane. Landfall is expected Tuesday evening in the Northern Gulf Coast between New Orleans East and Mobile, and forecasters are warning of 2-to-4 feet of storm surge at the mouth of the Mississippi River.

“A Tropical Storm Warning is in effect for Orleans Parish, with the potential for winds of 60 to 70 miles per hour (mph), mainly in gusts as rain bands move through the area,” according to an update from the city of New Orleans. “High winds can cause damage to unsecured property, snap or uproot trees, blow debris onto roads, and cause power and communications outages.”

In addition to a tropical storm warning, New Orleans remains under a flash flood watch through Wednesday as well.

“Rainfall at times will become heavy to torrential in bands, which may result in flash flooding,” according to a 4:30 a.m. update from the National Weather Service New Orleans office. Predicted rainfall includes “general accumulations of 4 to 8 inches with locally higher amounts in bands through Wednesday evening, [with] rain rates at times exceeding 2 inches per hour for durations of 30 to 60 minutes,” the warning states.

The next update from the National Weather Service is expected at 1 p.m.