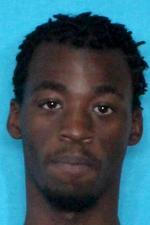 A machete-wielding man who allegedly attacked a group of people bound for a pool party earlier this summer has been identified, and investigators are hoping the public can help locate him, New Orleans police said.

Kevin Eugene Parker, 23, is wanted on warrants seeking his arrest on two counts of aggravated assault and one count of aggravated second-degree battery, following the July 20 incident at a home near St. Andrew and Danneel streets, according to NOPD reports:

The victims were inside of a residence preparing to head to a pool when, while obtaining items for the pool, Parker allegedly was outside of the residence brandishing a long machete. When one of the victims opened the front door and attempted to get Parker to leave, Parker allegedly raised the machete in a threatening manner to the victims. The victim who opened the door said he struck Parker with a metal pole he had obtained. During the altercation, the victim said, Parker cut the victim on the arm with the machete and caused a large flesh wound. Parker then reportedly fled the scene on foot on Oretha Castle Haley Boulevard.

Anyone who can help locate Parker or provide other information is urged to call the NOPD Sixth District station at 658-6060 to speak to a detective, or CrimeStoppers at 822-1111 to leave an anonymous tip that could be eligible for a cash reward.