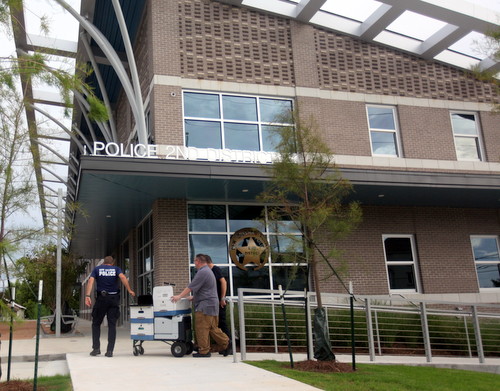 The Uptown-based Second District of the New Orleans Police Department has moved into its new building on Broadway Street in Gert Town, leaving its century-old former headquarters now vacant.

After the new building neared completion in late August, Second District officers began moving in in early August. The new station is now being used regularly, with meetings scheduled there and its parking lot filled with NOPD cruisers and SUVs.

City and police officials have touted multiple benefits to the move, beyond the mere fact of having a modernized facility. The new location is more centrally located in the Second District — which spans from the river near Napoleon Avenue up through the Audubon and university areas into Carrollton and Hollygrove. In fact, the old station is on what is otherwise the Sixth District’s side of the Napoleon boundary, with a small section of the block carved out to keep the old building within the Second District.

Officers have much more space both inside the building, where large rooms can hold community meetings instead of forcing officers to meet at nearby hospitals, and outside, where they can park much more easily than next to a school on crowded Magazine Street. Further, city officials have said the presence of the new station and the large new Gert Town Natatorium will be a welcome boost of activity to the surrounding neighborhood.

The first public meeting at the new building will be the Second District’s regular monthly meeting with residents known as NONPACC, currently scheduled for 6:30 p.m. today (Tuesday, Sept. 18).

The new address — 3401 Broadway Street — is now listed in multiple areas of the nola.gov website, though city has yet to announce the change to residents. Repeated emails to Mayor LaToya Cantrell’s office about the scheduling for the move — or the opening of the Gert Town Natatorium — have not been answered. 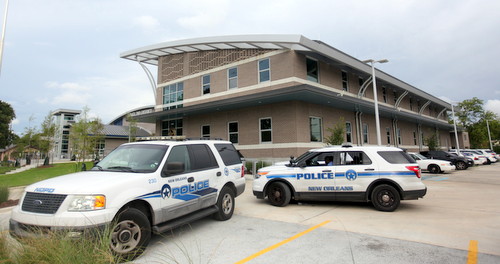 The move leaves the former station at Magazine and Napoleon unoccupied, a prime but troubled piece of New Orleans real estate. Built in 1899 as a fire station, the station’s deteriorating condition plagued officers for years, closing it occasionally for emergency repairs and weathering officers off-site at local hospitals during dangerous weather.

While the move to the new station was publicly heralded, city officials have never disclosed any plans for the old building on Magazine Street. If the city does not choose to re-use it for another municipal department, state law requires that it be declared surplus and sold at public auction, as it did with the former fire station on Laurel Street in 2013 (now home to Cherry Espresso). In rare cases, the city could also swap the land with another public agency for land of equal value.

While the doors to the old building are now locked with a barricade across the front, one subtle reminder of its long history as a police station remains: what appears to be an abstract stained-glass window is actually a map of the Second District. The window, called “Magazine St. Beat,” was designed by Mary Ann Caffery in 1989 as part of the city’s “Percent for Art” collaboration with the Arts Council of New Orleans. 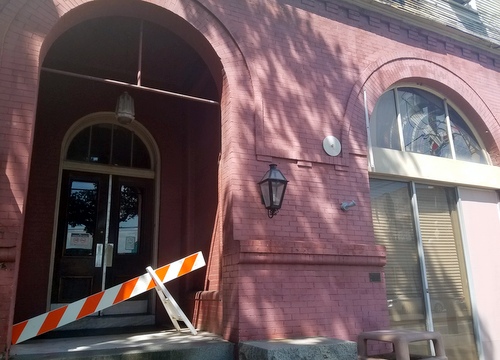 The former NOPD Second District station on Magazine Street is now vacant. The “Magazine St. Beat” stained glass window can be seen in the upper-right arch next to the doorway. (Robert Morris, UptownMessenger.com)