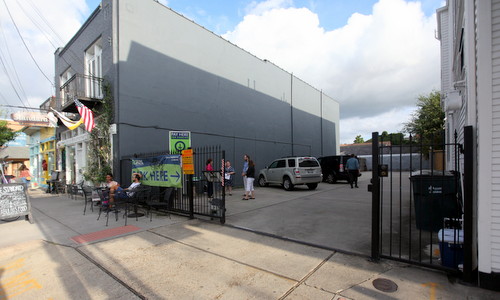 Neighbors meet with architects in the parking lot at 4210 Magazine about a new building planned there on Tuesday, Sept. 4. (Robert Morris, UptownMessenger.com)

A new three-story building with office or retails space on the ground floor and apartments above it is planned to replace a small parking lot on Magazine Street, residents learned this week.

The building at 4210 Magazine Street does not yet have a tenant for the first floor, but it will be built as a “white box” that could be used for a small shop or professional office, architects said. The owners — who will live in the third-floor penthouse apartment, above two other apartments on the second floor — do not want a restaurant, bar, or other high-traffic business there, and the space will have no major commercial plumbing, essentially just a restroom inside, the architects told neighbors at a meeting Tuesday night.

“They specifically do not want a restaurant or anything loud,” said architect Jared Bowers of Albert Architects. “We’re actually not plumbing this for a kitchen. They’re actually hoping it will be a lighter, quieter use, like a dress shop or a bookstore.”

The building — owned by a French Quarter company registered to Robert Watters — will replace most of the small paid parking lot on the right side of The Standard restaurant. The current gated driveway will remain, leading to a three-car parking lot in the rear of the property for the owners and each of the two residential tenants, Bowers said.

The upper floors will hang over the driveway slightly, making them wider than the ground floor. The building’s height is planned for the full 40 feet allowed by the city on Magazine Street — taller than the adjacent buildings and similar to the Shaya restaurant across the street — but the third floor will have a small terrace and be set back from the street, so it will not be as visible from the ground level.

“From the street, it will essentially read as a tall two-story building,” Bowers said. “When you’re driving by, it will keep in context with the neighborhood.”

The architects have not yet completed any renderings of the building, but the style of it is currently planned to be contemporary, like the Villa Vici furniture store and other new construction nearby, they said.

Before moving forward, the building needs a variance from the Board of Zoning Adjustments to be able to use the current single-lane driveway instead of the 24-foot two-car width required by law. The only cars driving on it would be the three permanent residents using the private lot behind the building, and they would have a space to turn around back there, Bowers said.

“We’re planning on using what’s already right there, that width,” Bowers said of the driveway. “What we’re proposing to do is essentially allow two-way travel where typically they would allow one.”

All of the paving will be permeable to meet stormwater retention requirements, although the material may be different for the driveway and the parking area, based on the city’s differing standards for each, the architects noted.

“We’re basically proposing a residential driveway at a commercial building,” added project manager Dan Akerley. “We wouldn’t be able to do this project unless we got a variance for the driveway.”

Three neighbors appeared at the meeting about the project Tuesday evening, amid the ongoing warnings for a Tropical Storm Gordon that never produced much rain. None of them expressed any objection to the plan, and Faubourg Delachaise neighborhood organizer Julie Graybill said she did not expect much opposition based on what the architects presented.