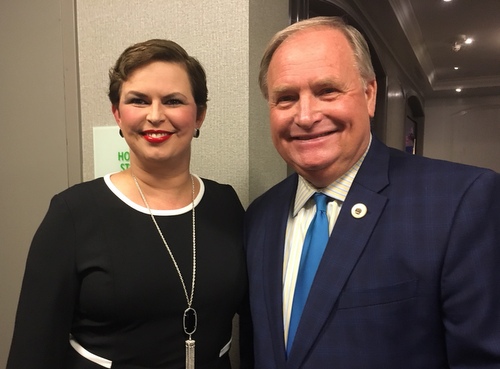 State Rep.s Julie Stokes and Rick Edmonds, both candidates for Secretary of State, pose for a photo at the Greater New Orleans Republicans endorsement meeting on Wednesday, Sept. 26. (photo by Danae Columbus for UptownMessenger.com)

Married to his high school sweetheart Cindy for more than 44 years, Edmonds has deep ties in the state’s faith-based communities and among fiscal and religious conservatives. Called to the ministry at an early age, Edmonds received his doctorate at New Orleans’ Baptist Theological Seminary and worked with churches in Florida and Louisiana including Shreveport’s Calvary Baptist Church and Academy where he managed 200 employees and a $12 million annual budget. After returning to Baton Rouge, Edmonds served as vice president of the powerful Louisiana Family Forum, which advocates for conservative Christian values. Since being elected to the Legislature in 2015, Edmonds became Senior Advisor to the large non-denominational Bethany Church in Baton Rouge where he oversees local outreach efforts. Recognized nationally for his unique ability to build church membership, Edmonds is using those same skills to build constituency around the state.

In his remarks to New Orleans Republicans last night, Edmonds came out swinging and said he was “a fighter for your wallet” that the voters of Louisiana could depend on. Edmonds has voted against 34 attempts to increase taxes. His two-pronged campaign features a pledge to protect Louisiana’s election integrity and provide trustworthy leadership. A steadfast fiscal conservative, Edmonds also wants to build confidence in state government. Like many Republicans around the country, Edmonds opposes voting on the internet and voter registration on Election Day. He also spoke on ensuring that “every American citizen” and “only American citizens who are registered to vote” vote – a clear reference to alleged voting by some non-citizen residents.

Edmonds also wants to improve the services available to businesses through the Secretary of State’s office. Perhaps Edmonds’ most telling point was his comments about hypocrisy. Some people call themselves Republicans, Edmonds explained, but if they are not “rock solid” in their values, the can push the wrong button. “I give you my word,” said Edmonds that he will always uphold Republican values.

When Orleans Republican Executive Committee chair Jay Batt introduced former Senator A.G. Crowe as “a Louisiana Legend,” observers knew Crowe also had support among the members. Born in New Orleans at Charity Hospital, Crowe called himself “an average guy” who has a 100-percent voting record on family values, has the most number of “no” votes on tax increases and is experienced in the archiving industry. Crowe pledges to increase voter turnout numbers, re-energize voters and “educate our young people to vote, but vote intelligently.”

Current Secretary of State Kyle Ardoin told the crowd that “I’m your guy.” Now is not the time to change leadership in the Secretary of State’s office, he said, because of the transition to new voting machines and the large number of elections on the calendar for 2019. Ardoin is working to improve cyber security and with new technology, and because he has climbed the ranks in the office, Ardoin believes his working operational knowledge is superior. He also elaborated on his Republican credentials and said he started at age 15 as a volunteer for former Gov. Dave Treen. “I am a conservative voice and a fair player. I am not running for any other office.”

State Rep. Julie Stokes never thought about running for Secretary of State until breast cancer derailed her bid for State Treasurer. Now cancer-free and proud of her new wavy hair, Stokes is focused on bringing her skills as a CPA and auditor to the Secretary of State’s office. “There is nobody better wired than a CPA to create safe, secure and fair elections. I want to create the most absolute secure election system possible,” Stokes said. Stokes plans on embracing the latest available technology and would develop a “one-hub, one-number” access system for all businesses. Stokes explained that her designation as a certified public accountant gave her “an edge” and that accountants are the “most trusted” business advisors. As an auditor of major corporations, Stokes also understands how to analyze the inner workings of businesses and recommend changes to improve efficiency and save money. She would also ensure that the office’s website is accessible in several languages, a request made of all candidates.

Edmonds is touting a poll he commissioned from respected Baton Rouge pollster John Couvillion of JMC Analytics & Polling that shows Democrat Renee Fontenot Free in the lead with Edmonds and Stokes statistically tied for second place. Almost 50% of voters are still undecided. Crowe has his own poll that shows the senator in the lead.

Though Fontenot Free has been endorsed by the Louisiana Democratic Party and subsequently by all the parish committees including New Orleans, it has become exceedingly difficult for Democrats to win statewide in Louisiana. Governor John Bel Edwards is obviously the exception. Yet, Fontenot Free is running a stronger campaign than many observers anticipated. She is expected to make the runoff against one of Republican candidates but will need significant new resources of funding to be viable in that race. Any Republican that plans to run well in Orleans Parish will have to build constituency among African-American voters, perhaps through one or more of the political organizations.