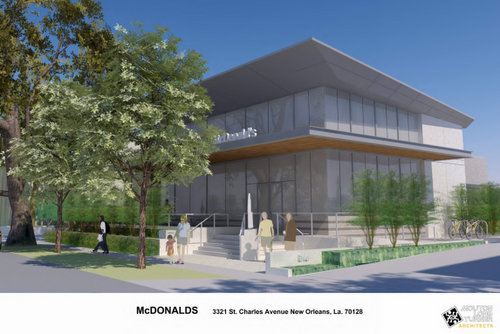 City planners are “skeptical” about McDonald’s plan to demolish their two-story restaurant on St. Charles Avenue and replace it with a new building designed to be more manageable for staff, but will continue talks with the corporation’s architects and attorneys for another month before making a recommendation, they said this week.

McDonald’s wants to tear down the building in the 3300 block of St. Charles Avenue (near Louisiana Avenue) and replace it with a new one because its design — from the early 1980s — is unusual today, said attorney Justin Schmidt. The company has acquired another adjacent lot since that time, and the building’s second-story dining room makes it difficult for the staff to keep an eye on customers, he said.

“It was built with two floors, meaning you would have dining on the second floor, which is very inconsistent with the majority of fast-food restaurants,” Schmidt said. “The model that was built in 1984 just doesn’t work today, with not being able to monitor what goes on on the second floor.”

Fast-food restaurants are functionally prohibited from demolishing their buildings on the central section of St. Charles Avenue, between Jackson and Jefferson avenues (where there only two, the McDonald’s and a Rally’s), so McDonald’s is asking the city to loosen that regulation and specifically allow their project. City officials told the City Planning Commission on Tuesday that they are unsure that the change is necessary or fits the city’s goals, but they offered to continue working with McDonald’s to try to arrive at a resolution.

“The staff is skeptical that the proposal is a better means of accomplishing the overlay’s objectives,” said planner Rachael Berg. “The development of the new McDonald’s restaurant is non-compliant with a number of design requirements.”

In general, the city is trying to reduce the presence of fast-food on major walkable corridors like St. Charles Avenue, said planner Stephen Kroll.

“We’re trying to achieve something else in terms of urban design, so fast-food restaurants are regulated very strictly,” Kroll said. “Generally what you get is a type of suburban, auto-centric design that doesn’t make sense along St. Charles. The design that’s been proposed to us is just not there yet.”

Schmidt acknowledged that finding a design for the McDonald’s that meets the city’s strict goals for St. Charles Avenue has been difficult, but expressed optimism that a solution could be found through more discussion.

“With all the new restrictions, we find ourselves trying to fit a square peg in a round hole,” Schmidt said. “We’re just still in the process of working through some of those items with staff, and would appreciate the extra time to fine-tune those.”

Schmidt noted that the Garden District Association also supports deferring a decision. The City Planning Commission voted unanimously to postpone their hearing on the issue until their Oct. 9 meeting. 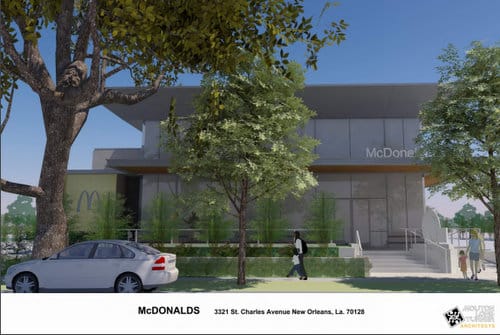 The view of the proposed new McDonald’s from St. Charles Avenue. (via City of New Orleans)