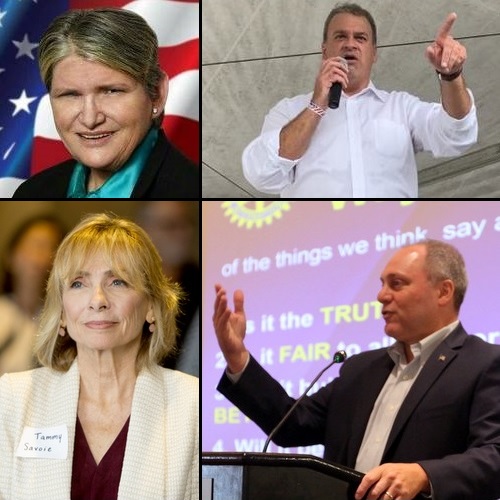 U.S. Rep. Steve Scalise faced his three Democratic challengers on Monday night in the first and thus far only debate of the fall Congressional elections, defending President Trump’s controversial tariffs against their criticisms of lost Louisiana jobs and explaining his ongoing opposition to new gun laws even after being shot.

Scalise, the Republican incumbent in Louisiana’s First Congressional District, debated three challengers — Lee Ann Dugas, Jim Francis and Tammy Savoie, all Democrats — for an hour Monday at Loyola Law School before the Alliance for Good Government. Two other candidates have also filed to run against him, but Howard Kearney (a Libertarian) arrived late and only gave a closing statement, and Ferd Jones (running as an Independent) did not show at all.

Based on fundraising and endorsements, Savoie and Francis are competing for the mantle of Democratic frontrunner to challenge Scalise. As of June 30, the most recent federal reporting deadline, Francis had raised $25,000 in contributions, Savoie raised $22,000, Dugas reported none and Scalise had a $1.9 million war chest. Savoie has garnered endorsements from the state Democratic party as well as party chapters in St. Tammany, Tangipahoa and Lafourche parishes, while Francis was endorsed by the Jefferson Parish Democratic Executive Committee.

On Monday night, questions from Alliance members from Orleans, Jefferson and St. Tammany Parish ran the gamut of national issues, such as immigration and the national debt, health-care reform and voting rights. On most of those, the answers fell into fairly predictable partisan boxes: the Democrats vowed to protect the Affordable Care Act and blamed Trump’s tax cuts for increasing the national debt, while Scalise praised the tax cuts for spurring growth and blamed Obamacare for high insurance premiums.

President Trump’s tariffs on international goods, however, has made trade policy an unusually high-profile national issue this year, and the Alliance asked the four candidates how they viewed those tariffs. Democrats were critical of the tariffs, with Francis questioning the data used to calculate trade deficits and Dugas arguing that they will increase costs on farmers.

“Grain and seeds are going to go to rot,” Dugas said.

“Trade works. Tariffs don’t,” Savoie said. “Louisiana can’t afford to send Steve back to Congress, because he has supported these tariffs.”

Scalise, however, countered that he remains a staunch supporter of free trade and was glad, for example, that Trump is renegotiating the North American Free Trade Agreement with Canada and Mexico, because he didn’t want the United States to withdraw from it. On the other hand, Scalise said, some of the United States’ trading partners are enjoying trade agreements that benefit them more than America, so he supports Trump’s actions to balance the playing field.

Canada’s markets are hard for American products to get into, Scalise said. “Is that free trade?” Likewise, Trump told European countries he would be in favor of dropping all tariffs between them and the United States, but they wouldn’t agree — suggesting that they benefit more than America does.

The candidates also had more nuanced stances on gun control, an unpopular issue in a district with so many rural areas complicated by the fact that Scalise barely survived a mass shooting against Republican congressmen practicing softball in Washington, D.C.

Dugas, a military veteran, said she still owns guns and hunts, just as she grew up doing. The country needs better enforcement of existing gun laws, she said, including a 50-state database run by prosecutors and medical examiners of people who have been barred from owning guns.

Savoie noted her own support for the Second Amendment as a 38-year veteran of the military, but she also agreed that Congress should do more to restrict violent offenders — including those convicted of domestic violence — from owning guns.

“Eighty-four percent of the country supports universal background checks with no loopholes, so we could do that tomorrow,” Savoie said.

Francis tied gun violence to health care, and said that the Affordable Care Act should have received more bipartisan support merely for its increase in mental-health coverage. Meanwhile, he criticized Scalise and the Republican Congress for failing to take steps such as requiring biometric locks on guns or lowering clip size.

“I believe our current representative should do more than send thoughts and prayers,” Francis said.

“When I was shot, the prayers were incredibly important,” Scalise retorted. “When there is a tragedy, a lot of us think it is important to pray for the victims.”

In addition to praying for the victims, policy makers should also find the facts, Scalise said. There were widespread calls for a ban of “bump stocks” after the mass shooting at a concert in Las Vegas — even though few people had even heard of bump stocks prior to the tragedy, Scalise said. Thus, it is impossible to take every tool away from potential mass shooters through the use of Congressional bans.

After the forum, the Alliance members conferred privately and announced later that Scalise had won their endorsement.

The Alliance does not allow photography or video recording during its forums. To read our live coverage of Monday’s forum, see below.

[Note: This article was updated at 3:10 p.m. Tuesday, Sept. 25, to include Savoie’s endorsement by the state Democratic Party.]