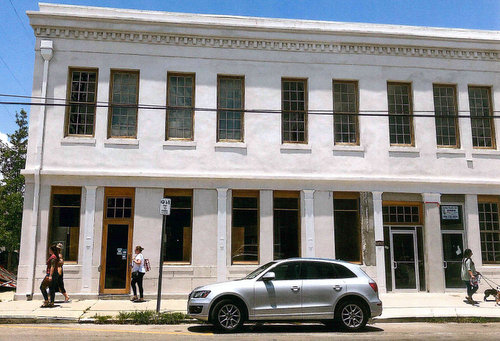 The former Jim Russell’s Rare Records building at 1831 Magazine is being renovated into a home for the new Union Ramen restaurant. (photo via City Planning Commission)

The plan to create a new restaurant called Union Ramen in the Lower Garden District building was formerly the home of Jim Russell Rare Records has received initial approval from the City Planning Commission, and now heads to the City Council for a final decision.

The three-story building at 1831 Magazine Street is being renovated into space for a variety of commercial tenants, but the Union Ramen restaurant requires a a conditional-use permit for a restaurant. Union Ramen — a concept created Jeff and Cat Gapultos, working with Chef Nate Nguyen — will have about 4,200 square feet on two floors of the 11,000 square foot building.

“Ramen is something that is very prevalent in some of the larger metropolitan cities around the United States,” said Jeff Gapultos, also a founding partner of Eiffel Society. “It’s not so prevalent here in New Orleans, and we’re just trying to bring this type of cuisine to this part of town.”

The request had garnered the support of the Lower Garden District Association, but a few individual neighbors spoke in opposition to it at the July 24 meeting of the City Planning Commission.

Architect Don Maginnis, whose office is adjacent to the building and who was briefly involved in the project before a disagreement with the owners, raised a number of objections to the prospect of another alcohol license on Magazine Street — echoing concerns by some of the founding members of the Coliseum Square Association about other recent proposals nearby.

“If the restaurant leaves, goes under, loses its lease, whatever — the whole building could have a liquor license that’s grandfathered in,” Maginnis said. “They could put anything in — biker bar, God knows what.”

The city planning staff, however, concluded that Magazine Street retains a healthy mix of restaurants, offices, shops and residences, and that Union Ramen will contribute to it. The alcohol license would remain with the building, but could only be used for a standard restaurant even if Union Ramen leaves — not a bar or any other venue, they said.

“The staff does not believe that a standard restaurant at this location, and its associated uses, will negatively affect the surrounding mixed-use or residential areas,” city planner Emily Ramírez Hernández wrote in her report to the commission.

After a few quick technical questions about the trash, licenses and permitting, the City Planning Commissioners agreed with the staff, and voted unanimously in favor of the project. Their recommendation now heads to the City Council for a final decision.