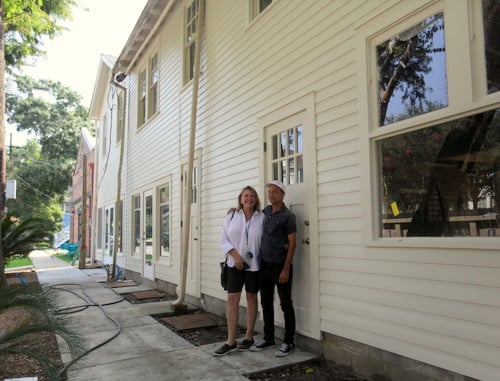 After a major historic structural renovation, the vacant former service station that for years was home to Cafe Freret is now slated to become a new location of popular Uptown breakfast spot Surrey’s, flanked on either side by a new family-oriented coffee shop called “Cafe au Play” and new location of Empanola. 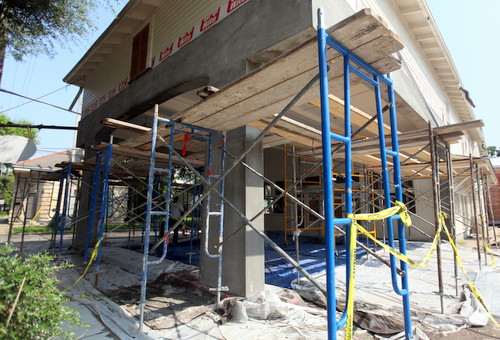 Work continues on the new columns at the building at Freret and Lowerline. (Robert Morris, UptownMessenger.com)

Cafe Freret closed at the end of 2015 after 11 years at the corner of Freret and Lowerline streets, and building owner Jody Ferchaud said it became clear that the building needed a complete structural rehabilitation, particularly focusing on the walls and the major columns holding up the broad overhang. After securing state and federal historic tax credits for a project she now estimates will end with a budget in excess of half a million dollars, she has now secured tenants for not only the main building on the corner, but each of the smaller buildings on its sides along Freret and Lowerline.

“Finding a good tenant was difficult when the building was basically being reconstructed from the ground up,” Ferchaud said. “Then, I knew they would come. I was committed to making sure the neighborhood was happy with the choices.” 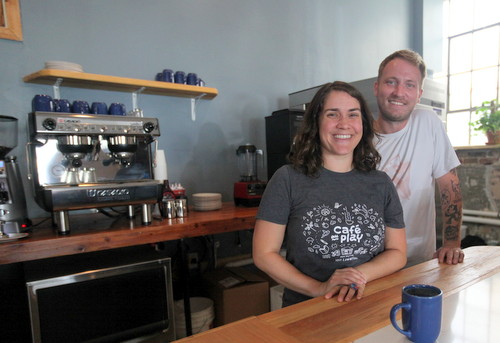 The first to open will be Cafe au Play on the Lowerline Street side, a new family-oriented coffee shop created by two New Orleans natives James and Kara Hayes. After teaching in the kindergarten program at nearby Lusher Charter School for nine years, Kara Hayes decided after the birth of their first child to find a new field that would keep her closer to her daughter.

After observing a lack of adult-oriented cafes that are also welcoming for children, the couple decided to open their own — marrying a chic coffee shop with a small, inviting play area inside the space for young children. James Hayes, a carpenter, converted the space from its former offices and built the entire interior himself, from the individual wooden tables for adults to the expansive play area for kids that itself mimics a tiny coffee shop with board games.

“Best construction job I ever had,” James Hayes said, laughing at the kid-sized scale of the play area’s countertops. “I had to totally readjust the way everything goes.”

Rather than simply creating a more traditional child-oriented space, however, the couple wanted the primary focus to be making adults comfortable enough to relax while their children were happy nearby. They chose muted blues, exposed brick and wood for the decor, not the bright colors of a playground.

“It’s more geared towards the parents relaxing and enjoying themselves while their kid happily plays,” Kara Hayes said. “You want a space where you can go and your kid is happy and safe, but at the same time you can sit and read a magazine or do some work on your laptop or talk to your wife or your husband. We wanted a space where everyone feels welcome — kids, college students, parents.”

The menu, they said, will be primarily tea and coffee drinks from local roaster Coast Roast, and a variety of pastries from local bakeries, starting with La Louisiane. Kara Hayes also plans a “homework happy hour” promotion in the late afternoon, where children who come to the cafe to do their homework will receive a free chocolate chip cookie, and has created a special kid’s drink named the “Charlieccino” in honor of their daughter.

“It’s steamed milk with foam on top so it looks like a cappucino with chocolate sprinkles and rainbow sprinkles, just something to make them feel they have their own special drink,” Kara Hayes said.

Cafe au Lait is expected to open its doors by Sept. 1, with a grand opening to follow. 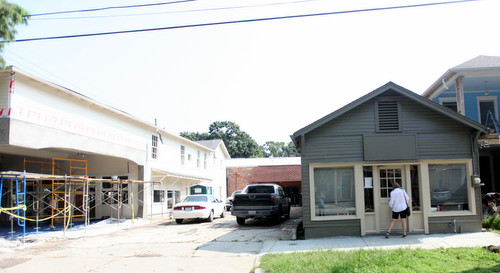 Empanola will occupy the small building next door to the future Surrey’s on Freret Street. (Robert Morris, UptownMessenger.com)

On the Freret Street side of the corner, the small building that was formerly the New Deal Hair Salon is also being renovated into a new location for Empanola. Empanadas are a small stuffed pastry common in South America, but husband-and-wife Jimena Urrutia and Marcelo Garcia imbued the concept with a New Orleans flavor at Empanola, with a “French-style puff pastry and baked instead of fried” and filled with crawfish, smoked sausage, carmelized onions, blue cheese and other local favorites, according to Gambit food writer Helen Freund.

Most of the structural work in the Empanola building is now complete, from the new electrical work and air conditioning to the complex drainage required in a restaurant, and Ferchaud said she expects the interior walls to be rebuilt quickly, paving the way for Empanola to begin moving in soon. The interior is mostly kitchen space with only a small seating area in the front, allowing some dine-in service required by the zoning but also making room for a robust take-out business for area college students.

While both the Cafe au Play and Empanola spaces were primarily interior renovations, the rehabilitation of the former Cafe Freret space for Surrey’s was much more expansive, Ferchaud said. Using historic tax credits opens the project to close scrutiny by state preservationists, so she hired a consultant to help her ensure that she restored everything as close as possible to its original materials.

While the columns holding up the overhang were completely replaced, for example, they were rebuilt to the exact same dimensions, with the arch between them drawn from the original. Ferchaud had to save a sample of the original stucco exterior, to ensure that the new stucco matched it precisely. Where an exterior door had deteriorated too far to be saved, Ferchaud had to take it to a lumber mill to have each board milled to the same dimensions as the original and rebuilt.

“Everything has to be restored,” Ferchaud said. “They want everything rehabbed as close to the way it was previously … I’m thrilled that the federal government and the state recognizes that people who own these properties or inherit these properties need some assistance and have some motivation to rehab them. Otherwise, they’ll tear them down or board them up.”

Surrey’s owner Greg Surrey happened to drive by one day while Ferchaud was at the job site, and that initial meeting culminated in his plan to make the renovated building his third location. The new Surrey’s, he said, will have the same menu and the same 8 a.m. to 3 p.m. hours as the others on Magazine Street, although its kitchen will be significantly larger.

“We’ll be able to do more stuff here because the kitchen’s bigger, but the core menu is the same concept,” Surrey said.

The large outdoor seating area that was such a major draw at Cafe Freret will return with Surrey’s, Ferchaud noted.

“The bread and butter of the restaurant previously was this overhang,” Ferchaud said, pointing out the temperature difference in the overhang’s shade versus the heat of the August mid-morning sun.

Underneath the 10 to 12 layers of paint on the building exterior, Ferchaud found traces of the building’s original service-station history. Surrey said he has already contacted local preservation organizations to help uncover more of its past, in hopes of incorporating some of that look into the final design.

“They’re going through their files,” Surrey said. “Before all this is done, we might bring back a little history.” 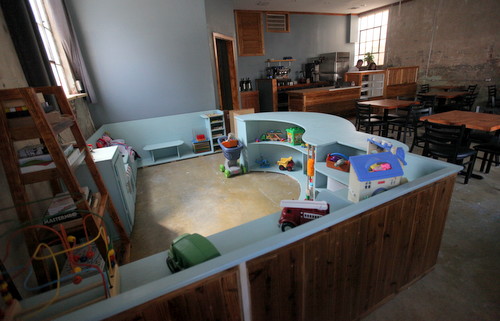 A custom-built play area for children shares one side of Cafe au Play, and traditional coffeehouse seating is on the other. (Robert Morris, UptownMessenger.com) 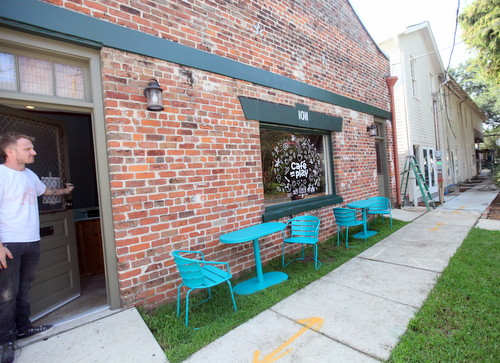 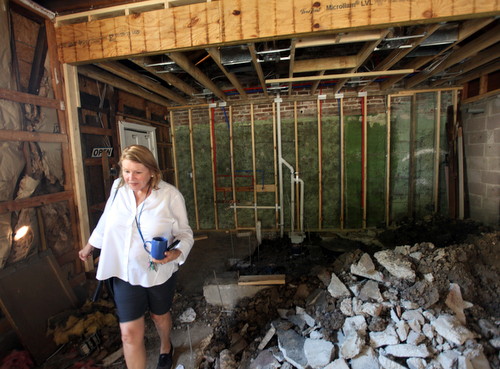 Jody Ferchaud walks through the building that will become Surrey’s. The underground plumbing and all the electrical work has been completed, and she said cleaning up and restoring the interior will be a much shorter project. (Robert Morris, UptownMessenger.com)