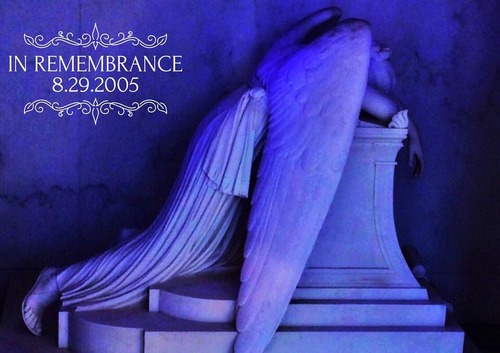 I hear it’s pouring rain today in New Orleans. How apt. Most of my friends say they will not watch television today. I haven’t seen my friend Kim Abramson in person for years, but today her Instagram post was one of grief. It reads, “We won’t turn on the TV today, because I can’t take the images. I love you, New Orleans, hang in there.”

Many others are planning a social media blackout. I will likely employ both survival tactics. For that is what we did—Katrina survivors, the luckier few anyway—we survived. Far too many did not.

Yesterday afternoon, Times-Picayune reporter Melinda Morris innocently Tweeted, “Where were you 13 years ago today?” The roundup’s responses brought forth emotions forgotten in the daily hustle. More poignantly, it brought tears. Morris admitted she can’t bring herself to watch video feed of Hurricane Katrina.

There were numerous emotional admissions from New Orleans and Mississippi on yesterday’s social media, emotions and memories that the rest of America will never be able to grasp. Many started crying. I was one of them.

“I can’t relive my tale. Just can’t. I weep every year this week,” said a friend on Facebook. Others reported a creeping melancholy that appears every year in late August, a dread that they cannot identify.

Before the wind, the surge, the water, destruction, CNN, St. Rita’s, Baptist and Charity, homelessness, the duct taped refrigerators, FEMA, MRES, bleach, insurance companies, and the nervous breakdowns, there was merely evacuation—for those lucky enough to get out.

Evacuation was the topic New Orleans reflected upon yesterday, the anniversary of the day before the storm. That is the broad stroke subject of this column. Any more would take weeks of reflection and not a small amount of bourbon.

Where were you on August 28, 2005? Before everything changed?

My first memory is helping to pull my stepfather’s boats out of Lake Catherine. I was helping to move them up the levee and down Highway 90 to higher ground.

The lake house was raised at least six feet, but still we carefully lifted his mother’s antiques onto kitchen counters and the pool table (a waste of time—the eye of the storm hit the house, not a matchstick sliver was left, it became the house from Oz, even the slab vanished).

This was after a morning of faxing letters to clients and courts about the mandatory hurricane evacuation. At the time, I worked at a CBD law firm with out-of-state deadlines and I wasn’t sure the rest of the world would know I wouldn’t be at work on Monday.

I never returned to work. One of the many who lost their jobs, businesses, and careers.

My day had begun Uptown, the usual grueling hurricane drill of carrying heavy clay planters and quickly scrubbed garbage cans indoors. Locals know a small potted plant can become a dangerous missile during a hurricane. Then came the necessity of doing the same all over again for elderly neighbors. Hanging plywood on 12-foot windows, using a skill saw to cut plywood for the old lady down the street, running with suitcases, everyone racing around borrowing extension ladders, waiting in gas lines, and emptying the icebox. It’s a bit like cross-fit, but the stakes are higher.

I’m organized, so I had my hurricane packing ready to go in a few minutes. I keep everything sentimental in one document box for such occasions. The rest is typed on a list taped to the inside cover.

This time was different. I had seen the satellite imagery and heeded the warnings of my Tulane professors: “if the levees break, you no longer live in New Orleans.”

I packed my entire wardrobe of suits and heels, plus a box of resumes, and my bulky desktop computer. I figured if Katrina bulls-eyed, my first order of business was interviewing for a new job wherever I landed. There was no room in my car or plan for jeans. My entire life was packed in less than an hour—ready to never return.

Off and off throughout that morning, sending work emails, contacting clients, responding to neighbors amidst the rushing, I had started calling family. Some were frantic, some organized, others catatonic.

My next stop was a race to the ‘burbs to forcibly place my mother into a car. She was reluctant to move. My father was fiddling with tools. I watched Mom pack and unpack the same suitcase and move a stack of photographs back and forth between two tables for hours before I packed for her and loaded her car. I finally had to push her into the car seat. There was drama, but there always is during an evacuation. However, my goal was accomplished; both parents were actually leaving the driveway. It was late afternoon.

This was after last-minute rushing to fill her prescriptions, call her relatives, pack the dog’s toys, clear their yard of flying plants, and gather insurance and medical documents before we could head to my father’s lake house on the Rigolets strait. Then it began again. I had to prepare a third house, move and store boats, and secure large construction equipment. One crazy memory is of my mother laughing on the riding mower at Lake Catherine, something about not wanting to tackle long grass after the rain. I ran from room to room, grabbing irreplaceable family photographs and retrieving belongings.

That was the early evening I was bestowed with the Belizian nickname “Hard Monkey.” I was wrestling fishing boats onto trailers at the time with my stepfather. I still don’t know what it means, but he seemed pleased to bestow the moniker. I was too busy to ask. The sun was setting and the wind had started. I just wanted my parents out of New Orleans.

We hit the road late in the evening, the evening before the storm hit early the next morning.

My father knew back roads through East New Orleans and swamp I’d never seen before. We made good time whipping through deserted roads in a three-car convoy skirting the I-10 until we reached the lake. Then, like most, we entered the gridlock. We became stuck in 5 mph evacuation contraflow for over a dozen hours (usually a 4-hour drive) before reaching Tuscaloosa. No bathroom breaks.

My car engine blew a rod in the heat. The temperature gauge on the dashboard registered 112°. I had given my water bottles to my parents who were in front of me. Everyone’s car was filled to the brim with belongings and people. Windows had to be down as AC was not an option. It was hot. The air was mostly exhaust fumes, desert dry but humid at the same time, the heat of August in Louisiana, but somehow different.

That heat and the sounds of thousands of engines bumper-to-bumper, news radio, and conversations with and from the car next to you is what I remember most. Then it became quiet. We were all too tired. There was also the passing of supplies and beverages through car windows. One lady shouted for baby formula and a man came running from a truck carrying a box.

Cars overheated and were pushed off the road, the contents and passengers absorbed into other cars—the cars of strangers. I strangely remember thinking the day was unfolding not unlike those depicted in old Westerns, the wagon train movies. None of it was surprising to someone who truly knows New Orleans. New Orleanians are generous to strangers at even the worst of times, but even so, it had become surreal.

That was the day before most of us became refugees—but we didn’t know it yet.

For those left behind, forced to stay or who chose to stay, it was to be a different story altogether.

If you’re a newer New Orleanian, the above is a broad stroke memoir of how it began for me. The beginning. The storm hit early the next morning. August 28, 2005 was the easy day. The rest of it, well, it unfolded not unlike the first season of the Walking Dead.

For those who lived it, we will never forget, no matter how we try.

That’s the short version—my version, of my day, before Katrina, my memories. Minus the truly painful and the awful reserved for therapists and porch sitting with the closest of old friends and the strongest of mint juleps.