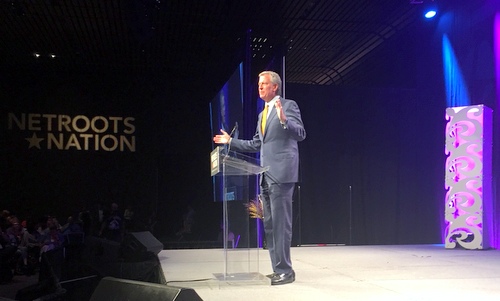 “It could be a toss-up,” said former Congressman Bob Livingston when asked Monday if he thought the Republican Party would stay in power after the November 2018 mid-term elections. “I believe the GOP will remain in control, but I have been wrong on occasion. The Ohio congressional special election will be a good test of Republican strength.” Readers probably know that Republican Troy Balderson, 35, declared victory over Danny O’Connor, 31, after narrowly leading Election Day voting in Ohio earlier this week. The outcome could change — or not — after thousands of provisional ballots are counted.

Livingston was one of many New Orleans-area Republicans to attend the funeral of former Councilmember Bryan Wagner, the first Republican to serve in that body since Reconstruction. Others among the city’s Republican elite who attended included local party chair Jay Batt, former appeals court judge David Williams, and GNOR’s John Tobler as well as by many Democratic elected officials who served with Wagner such as former Mayor Sidney Barthelemy. Even younger politicians who only knew Wagner by reputation came too.

Politics was very different in Wagner’s day. Elected officials were courteous, civil to each other. They could disagree on a particular issue but eventually reached consensus. Bryan Wagner epitomized an era when government was respectful but still got things done.

Have times changed! During the weeks leading up to Ohio’s election, President Trump and Vice President Pence wasted no time before slamming Connor in a no-holds-barred effort to keep GOP momentum going forward toward midterms. It’s been more than 30 years since a Democrat has served in Congress from Ohio’s District 12. President Trump carried the district by 11 points. The Wall Street Journal editorializes today that Ohio’s lackluster election results have sparked a debate over President Trump’s role and the Republicans’ fate in the midterm election. Less than 1 percentage point currently separates Balderson and O’Connor, who will face off again in November.

Today both sides are still claiming victory – the GOP because Balderson is currently in first place and the Democrats because dark horse O’Connor’s unexpected voter strength demonstrated that higher income suburban districts once considered safe for the GOP are in fact winnable by Democrats.

Democrats are also celebrating the August 7 victory by Rashida Tlaib in Michigan’s 13th Congressional District primary. Tlaib will be the nation’s first Muslim congresswomen. Expected to join Tlaib in Congress is New York’s progressive newcomer Alexandria Ocasio-Cortez and perhaps even Boston City Council member Ayanna Pressley who faces incumbent Michael Capuano in Massachusetts 7th Congressional District. Ocasio-Cortez and her mentor Bernie Sanders have campaigned for Pressley, an African-American. Around the country 11 women are running for governor while 185 women qualified for Congress. More than 400 gay, lesbian, bisexual or transgender candidates are also seeking local, state and federal offices including Christine Hallquist, a transgender woman running in the Democratic primary to be governor of Vermont and Sharice Davids, a lesbian and Native American vying for a Congressional seat representing Kansas.

There is great optimism expressed by Democrats including Senators Cory Booker, Kamala Harris, Elizabeth Warren, Congressman Tim Ryan, NYC Mayor Bill De Blasio, New York gubernatorial contender Cynthia Nixon and Ocasio-Cortez – all of whom addressed last week’s Netroots Nation conference in New Orleans. An obviously tired but enthusiastic Ocasio-Cortez was quick to point out that it was “time to take American values back including respect and dignity for all people. We need love, compassion and humanity in our homes and in our government,” she said. “Something is happening in this country. We can win,” Ocascio-Cortez told the activists in attendance.

Ryan said that Democrats needed a bold agenda because corporate American has a “stranglehold” on our economy. Harris said the power of the people is “greater than the people in power.” De Blasio said that this is a new moment in American politics where vision, coherence and mobilizing people is more important than playing by the old rule book. Nixon urged attendees to “uproot the broken establishment.” Booker urged attendees to “reject normalcy,” embrace justice and a sense of purpose “that only comes from shared pain.”

Though President Trump believes he is indispensable to the success of Balderson and other Republicans around the country, many Democrats and even some Beltway Republicans understand that President Trump created the toxic political climate that exists today and may be the biggest impediment to the party’s future.

The Washington Post reported yesterday that according to the Cook Political Report Democrats enjoy an 8-point advantage when likely voters are asked which party they would prefer in a race between generic candidates. Election analysts estimate that Democrats need a 6 to 8-point advantage in the generic ballot to gain the 24 additional seats necessary to take over the House. In the Senate, 35 seats are up for grabs. Democrats must win 26 of those 35 elections to see a net gain of 2 seats needed to win control of the Senate. Democrats also believe that victories by the 15 Democratic women seeking U.S. Senate seats are essential to overall success.

While the Democrats talk about the “new American majority” and how best to meet their needs, according to the New York Times, many Republicans “continue to embrace fear and anxiety as their predominate message” instead of tax cuts and America’s overall robust economy. In contrast, Majority Whip Steve Scalise said last week that “Democrats’ radical agenda is out of touch with everyday concerns of American families. Republicans are continuing to work with President Trump to address the issues that affect workers and families by implementing policies to grow the economy, create new jobs and prioritize national security.”

Only about 90 days remain before American voters signal which message they prefer.