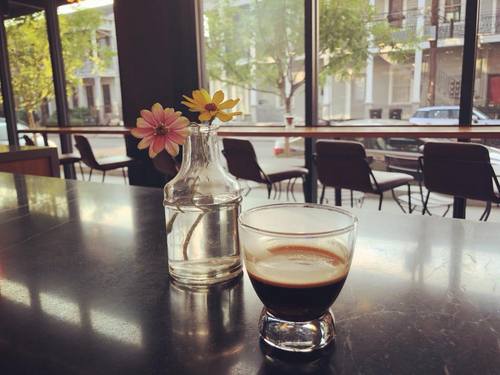 The view over the counter and out the front window at Cherry Coffee’s second location at 1581 Magazine Street. (via Cherry Coffee on Facebook)

Cherry Coffee, the cafe that first launched in a former firehouse near Wisner Park, has won an enthusiastic thumbs-up from the City Planning Commission to convert its second location in the Lower Garden District into a restaurant.

Cherry opened its second coffee shop in the newly-built Julian building at 1581 Magazine Street in April and is now seeking to stay open into the evening with a light dinner and drinks menu, just as it did with its original Laurel Street location, owner Lauren Fink told the City Planning Commission in a hearing on Tuesday, Aug. 14.

“We are looking to extend our hours, and serve some alcohol and small bites in the evenings,” Fink said.

The city planning staff said that Cherry’s request to become a restaurant requires city approval because of its location within the Magazine Street overlay district, and that it should be approved because it meets all the standards of the city’s Master Plan.

“A restaurant is an appropriate neighborhood-serving commercial use,” said planner Haley Delery. “The staff does not believe a standard restaurant at this location and its associated uses will negatively affect the surrounding area.”

Cherry’s request has been cited on occasion by some longtime Coliseum Square activists amid their concerns about the proliferation of alcohol-serving establishments in the Lower Garden District, but no one spoke against the project before the City Planning Commission. Instead, it drew warm praise from the commissioners in a hearing that lasted literally less than five minutes.

“I’m glad to see that end of Magazine Street continuing to develop into a nice area,” said Commissioner Robert Steeg. “This building is a nice addition to the growing number of restaurants down that way.”

The commission’s recommendation of approval will now be forwarded to the full City Council for a final decision.