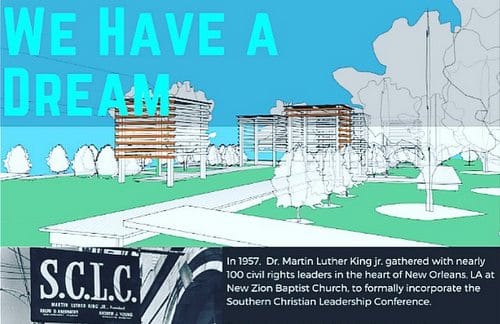 Part of a promotional flier for the fundraiser for the park. (via Felicity Redevelopment)

On Feb. 14, 1957, a crucial moment of American history was made in Central City, when Martin Luther King Jr. came to the New Zion Baptist Church on Third Street to found the Southern Christian Leadership Conference, what would become one of the country’s foremost African-American civil-rights organizations.

The only marker commending the group’s founding, though? A plaque on the edge of the church’s property. But there’s a dream to change that — one that’s now starting to become a reality.

Felicity Redevelopment Inc. has just completed what its executive director said is the first phase of a project that will turn what was a vacant piece of land next to the church into an educational park for the community, complete with a boardwalk, art and an educational component.

The boardwalk phase is done, Executive Director Ella Camburnbeck said, as she brought supporters together at The Revolution Wednesday to help raise $5,000 for the project’s second part, which will be a mural and art pieces based on the SCLC’s first leaders.

The entire project costs $115,000, and Camburnbeck said she hopes it will be done by the end of the year, and be close to finished when the current national SCLC comes to New Orleans for a conference in October.

Art at the site should start getting made next week, Camburnbeck said, before landscaping and an educational component go after. The artist for the SCLC founders’ portraits will be Jessica Strahan, whose portfolio includes brightly colored paintings of other civil-rights luminaries.

Funding for the educational part, which will explain the SCLC’s founding and its original leaders, will come thanks to a $25,000 grant from the National Park Service, according to Camburnbeck.

Ann Sayas, who came to The Revolution Wednesday to give a donation for the project, said it’s that educational component that’s desperately needed.

“We cannot lose the stories of the neighborhoods. We must keep the stories in the view of the public and particularly the young people,” she said. “I’m always very concerned when I go into a school and find the young people don’t know their history well.”

Marie Ortiz was the first woman active in the Southern Christian Leadership Conference, but she wasn’t there to see the founding. She had no choice — she had to pick up her kids from school.

“I was a little young and I was a mama,” said Ortiz, who would serve in the organization for the rest of her life, even once busting a man wrongly accused of murder out of a Mississippi jail for it.

Sayas was joined by two others that donated from the group Welcome Table New Orleans, an initiative started by Mayor Mitch Landrieu to discuss the city’s plans to take down four Confederate monuments.

Camburnbeck said she sees the creation of this park as a foil to the monuments coming down.

She admitted she knew little about King’s visit when her organization — which has refurbished blighted Central City properties for the last 20 years — bought the empty lot in 2016, as tensions surrounding the city’s Confederate monuments rose.

But when Camburnbeck learned the full history, the purpose of the property became obvious to her.

“What histories do we want to erase? Maybe take the next step on that conversation and say, ‘What histories are we not lifting up? That we could rally behind in a good way?’” she said.

And for Ortiz? She’s just glad the organization that’s meant so much to her will finally get the appreciation — and recognition — she feels it deserves.