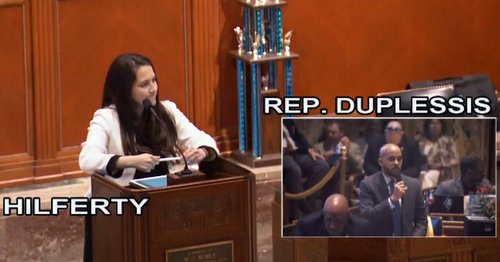 State Rep. Stephanie Hilferty discusses a resolution creating a task force to study the Sewerage & Water Board with Rep. Royce Duplessis, also of New Orleans, prior to the bill’s passage May 16. (photo via Louisiana House of Representatives)

The state legislature is creating a new task force to study the endemic problems at the Sewerage & Water Board of New Orleans — an entity it created more than a century ago — and has requested a report within six months on whether the agency should continue to exist.

City Councilman Joe Giarrusso III — who chairs the council’s public works committee that has been investigating some of the same issues — praised the step, saying that the state’s focus on the agency’s long-term structure will allow him to focus more on correcting its day-to-day management issues.

Hilferty’s bill passed the legislature by a vote of 70-0 on May 16, with only brief questions posed by other lawmakers. The primary function of the task force is to create a report on the future of the Sewerage & Water Board’s structure by Jan. 31, she told them, explaining that the responsibility falls to the state since the agency was created by the state in 1899.

“119 years ago we created this entity,” Hilferty said. “There’s an urgent need for comprehensive review of management structure of the Sewerage & Water Board and drainage facilities and services in Orleans Parish, including the accompanying legislation.”

The New Orleans City Council formally accepted notice of Hilferty’s task force on Thursday (July 12), and deferred it to the council’s Public Works Committee. Giarrusso, the committee chair, said that Councilman Jay H. Banks will be the council’s appointee, and that Deputy Chief Administrative Officer Ramsey Green will represent the mayor.

According to the bill, the first meeting of the task force should happen by Aug. 1, and Giarrusso said he expected that their work will begin quickly.

“It’s becoming clear that there’s too much Balkanization between the Sewerage and Water Board and the Department of Public Works, and there needs to be a better governance model for these drainage systems,” Giarrusso said Friday morning.

Giarrusso’s committee convened in June with a lengthy list of questions for the Sewerage & Water Board related to its drainage failures and equipment failures last summer and billing issues that have confounded the system since then. On Friday, he called the state’s task force a “blue ribbon committee,” and said its focus on the agency’s structure will allow the council committee to continue investigating Sewerage & Water Board operations, staffing, training, and other issues.

“What I would like to see are parallel tracks,” Giarrusso said of the task force’s work and his committee’s efforts. “This blue-ribbon committee is working on a model that they can bring back. … What I hope would happen is the administration, the council and the legislative delegation sit down before the next session to figure out what is in the Sewerage & Water Board’s best interests and move together in lockstep through the legislative process to make that happen.”

The council committee will take a close look the current leadership of the agency, the culture within it, the staffing levels and the maintenance of the system’s pumps and power supply, Giarrusso said. But for now, addressing the billing problems is the top priority.

“I really feel like the billing issues are just predominating everything. It affects everything,” Giarrusso said. “But if we get the governance issues right, these other issues that permeate from that can be addressed at the same time.”