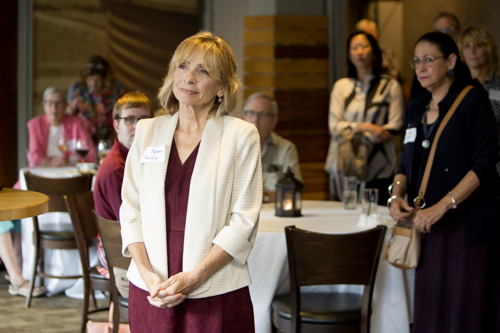 Dr. Tammy Savoie, a psychologist and retired Air Force lieutenant colonel, listens as she is introduced to a crowd of Democratic fundraisers at the Calcasieu event space in the Warehouse District on Tuesday, July 24. (Sabree Hill, UptownMessenger.com)

The difficult odds of upsetting U.S. Rep. Steve Scalise cannot be understated: the nationally-known Republican has never garnered less than two-thirds of the vote in his Congressional district.

Nevertheless, Tammy Savoie is persisting. And, for the first time in what may be decades, Democrats in New Orleans believe they have found a candidate who can make the race for the seat competitive.

“I think this is the first viable candidate in the First Congressional District in a long time,” said Bill Hammack, who hosted a fundraiser for Savoie on Tuesday that filled in the banquet room at Calcasieu in the Warehouse District.

Savoie’s supporters are energized by her background, a Jefferson Parish native with a Ph.D. in psychology who served for decades in the Air Force. After retiring from the military as a lieutenant colonel in 2016, she turned down a job with the U.S. Department of Health and Human Services to return home to New Orleans, and join the Emerge class training women for prospective runs for office.

“Why am I doing this? Because I have to,” Savoie said at Tuesday’s event. “If you are angry and worried about our country, you have to do something.”

Further, national political journalists are predicting a wave election for Democrats in the Congressional midterms, observing that Democrats are now polling a double-digit lead over Republicans in the “generic ballot” for Congress, and that many of those newly competitive Democrats are women. Savoie supporters point to specific examples they hope to see her follow — Alexandria Ocasio-Cortez’s upset victory over a mainstream Democrat in New York, and Stacey Abrams’ historic bid for governor of Georgia.

“She’s an example of what you’ve heard about all over the country,” Hammack said. “I think it’s going to make a difference nationwide.”

Progressive politics have a foothold on the Northshore, and if Uptown New Orleans Democrats turn out along with young people and minorities in Jefferson Parish, Savoie has the possibility of a coalition, her supporters say.

“Just because it’s quiet doesn’t mean you don’t have a lot of support,” said Don Jones, a Jefferson Parish Democrat.

What may seem like a favorable national trendline, however, runs up against a harsh reality on the ground in the First District, which includes a corner of Uptown New Orleans and Carrollton, but much larger swaths of the Northshore and Metairie. Scalise was elected to the First Congressional District in 2008 with 66 percent of the vote during the Democratic wave that accompanied the election of President Barack Obama. He was re-elected the next year with 78 percent, and his results have see-sawed between those numbers ever since.

Technically, Savoie is one of five challengers to Scalise. The Congressman has regularly faced similar size fields in his re-election bids, however; last year, he won 75 percent of the vote against a field of six that included Lee Ann Dugas and Howard Kearney, a Democrat and Libertarian running against him again this year.

Jay Batt of the Orleans Parish Republican Executive Committee said that any challenger to Scalise will face long odds. The Congressman — the second-highest ranking Republican in the U.S. House of Representatives, who survived an assassination attempt last year in what is widely hailed as a miraculous recovery — but also still popular and well-respected at home, Batt said.

“I think Steve has shown his ability to represent his district and be a patriot for his county. I don’t think anybody has much of a chance against him given the circumstances,” Batt said. “She is a Democratic socialist, so I don’t think that district is represented by that kind of mindset. I’m sure she’s a fine person, but it’s going to be extremely challenging.”

In her stump speech, Savoie emphasizes three main campaign issues that have the potential to attract supporters across party lines. First is healthcare, where she proposed a public “Medicare for All” option alongside private health insurers, and strongly criticizes Scalise for his leadership role in trying to repeal Obamacare — specifically his role securing votes for a Republican healthcare plan through the House.

“You can see him clapping and smiling when he was knocking 23 million people off of healthcare in this country. He was very happy about that. He was proud of that moment,” Savoie said. “We have to be concerned about everyone. We have to be a moral country.”

Second, Savoie talks about the economy, again describing a “moral country’s” need to require a livable minimum wage, and criticizing the Trump trade wars she said will cost Louisiana port workers jobs. Finally, she assails Scalise and the Republican Congress for standing by passively while ever more troubling connections between Trump and Russia come light. In questions from the audience, Savoie also professed support for “anti-violence” measures to keep guns out of the hands of the mentally ill or domestic abusers, as well as for keeping abortion “legal, safe and rare” — in part by improving prenatal care so that bearing a child does not become a financial decision for the mother.

After the event, Savoie supporters pointed to the unprecedented turnout locally for recent events such as the Women’s March, fueled by frustration with President Trump, as providing their candidate with momentum in the face of such difficult odds.

“I think we’re going to have to do a lot of word of mouth,” said Donna Dees, who organized the Million Mom March against gun violence on Mother’s Day in 2000. “When people care about certain issues, they will come out to vote.”

Savoie likewise remains confident. After her brief introduction at Tuesday’s fundraiser, while supporters encouraged one another to write checks, Savoie said she sees a path to victory.

“This is so doable,” Savoie said. “People are extremely excited. Everywhere I go, we get big crowds. They’re ready for a change.”