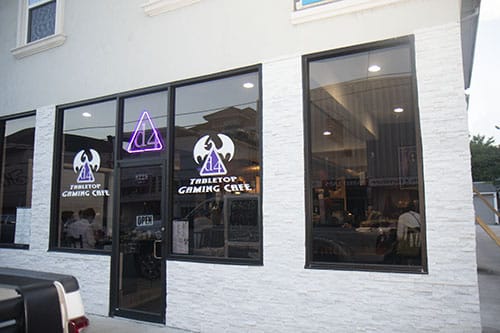 The new d4 Tabletop Gaming Café offers a hub for New Orleans card and board game players to meet, eat, and play for hours long on Oak Street.

Owners Mark and Tracy Meyer opened the café in March this year. Mark Meyer is a city local with 20 years in the restaurant business, and Tracy Meyer has over 10 years in the business as a pastry cook. Meyer said he and his wife “dreamed up” the idea to combine their love for gaming with their cooking experience, since Meyer needed to create a job for himself after injuring his back. After a two year process, they opened d4 in March this year.

Located at 8228 Oak Street, d4 offers board game rentals, free seating at dining room tables, and food like po-boys, salads, nachos, wraps, soups, and bread pudding. The board game rentals may be played in the shop or back at home, and d4 hosts several events and tournaments for certain games.

“This way you can come and just enjoy games endlessly for less than half the price,” Tracy Meyer said. “You can have your own tournaments and all that.”

Meyer is building a game menu and said that d4 is open to game recommendations that they can order, as they continue to get to know their customers.

d4 is decorated in a dark, Victorian style with a items on the wall like an open book and candles, a human skull, old photographs, and paintings. 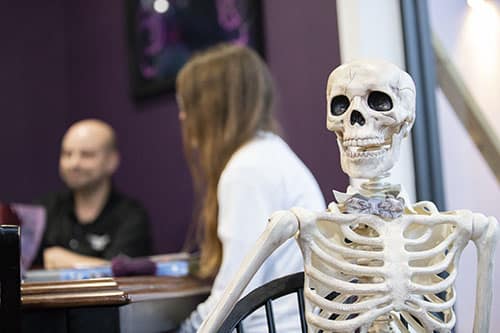 “This is where I poured out my dark little heart, the goth in me,” Mark Meyer said.

The venue has a total of three sections for seating, including space inside the Annex, a 576 square feet building in the backyard available for rent. 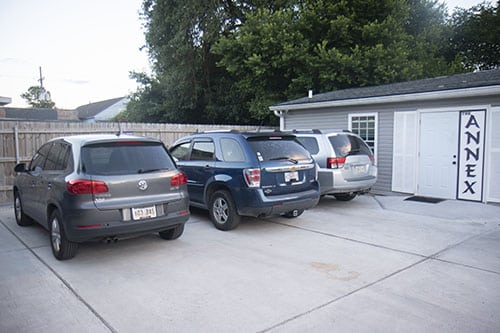 “Hopefully when our Magic game blows up and we have all these guys getting noisy, we’ll get them in there, so they’re not bothering the other players,” Meyer said. “Because it can get loud when all the games are going, especially for role playing games, you need to be able to hear the guy across the table from you because he’s describing what’s going on.”

Meyer said that if d4 does well enough, they can expand upstairs and add 10 to 12 more tables. 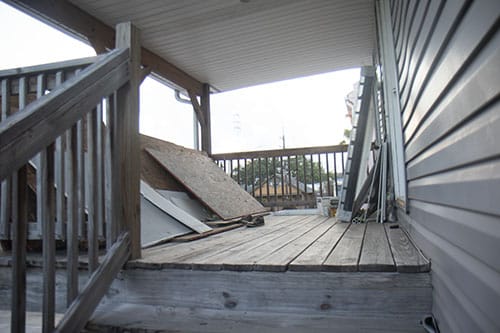 The upstairs of the d4 Tabletop Gaming Café building is currently not being used. The café located at 8228 Oak Street, features board game competitions, board games to buy, play and rent. (Zach Brien, UptownMessenger.com)

“There’s a renaissance in board games right now,” Meyer said. “It’s not just new games; it’s new ways to play games. It’s not ‘me against you’ anymore.”

His own love for board games started in Dungeons & Dragons, which he started playing at seven years old.

Meyer explained that the “Satanic panic” — a national fake news frenzy linking the game to nonexistent occult crimes — had hit the media around when he learned to play Dungeons & Dragons in 1981. Meyer and his mother heard reports on the news of Satanists abducting children out of the park and the game being tied to Satanists.

“We had learned it (Dungeons & Dragons) from friends at church,” Meyers said. “The dad was a nerd, I didn’t know what a nerd was at the time, but he was one.”

When his mother confirmed what the game was and heard Meyer and his friends using words like “niche” and “charisma,” she was relieved and decided they were doing homework without even knowing it.

According to Meyer, the game helps your problem solving, English, Math, and is engrossing and fun, as one progresses through a player-made story in fantasy roles. 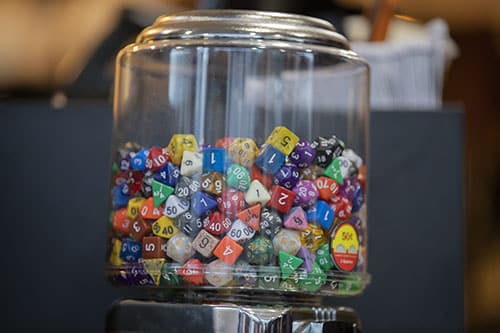 For 50 cents, customers can purchase dice from d4’s dispenser, which is an attractive service in the café . d4 Tabletop Gaming Cafe is located at 8228 Oak Street, features board game competitions, board games to buy, play and rent. (Zach Brien, UptownMessenger.com)

“Nothing beats sitting around the table, where you’re all just laughing at the same time and experiencing the game,” he said.

Now he has started hosting a session of the game for a group of 8-year-olds on Saturday mornings. Some kids discovered the game after its high-profile role in the Netflix breakout TV hit Stranger Things, so their parents called and asked if d4 could help their children learn.

That started d4 Café’s “Adventurers Academy,” where the players are taught how to play, especially kids, until they can run their own games. Sessions with children usually run about three hours.

On an active Wednesday night, the café may have about five different games going on, with mostly Magic the Gathering being played. Keep up with d4 Tabletop Gaming Café and their weekly events here or on their Facebook page.